We are here in southern India, in Kerala, the gods own country. We had no reference to this place, but I decided on Kannur since that is where we can see the celebration of Theyyam. It was worth seeing this ceremony.

We were sleeping 12 meters above ground, on top of red fire trees, in a magical house on the tree reachable by a footbridge. It had a great view of coffee plantations and the tree grew inside our bedroom. At night, fireflies glittered like fairy dust and we fell asleep to the sound of cicadas.

The next morning, 25 monkeys played on our terrace, swinging off the coffee balusters. They turned our lights off and on, looked avidly through our windows, and licks our window before cleaning it with his paw. I would be happy to be reincarnated as a monkey if it meant living here.

Instead of flying directly to Kerala, we started at Bangalore and then go slowly south, to better taste the contrasts. I had been 10 times before, and I wanted to do it very differently this time. Traveling alone, I did not want a vacation in the car but book a train ticket.

After a long train ride, we arrived at the Kannur station. We had first class seats, which gave us a tremendous chill inside the car. Luckily I knew it from a previous trip and we were cautious taking with us clothes with which to cover us. The rest of the travelers spent the trip eating all kinds of food, from fresh fruit to rice. The reason for not using the car for the journey was the poor condition of the roads which would have made the trip practically all day.

After the arrival time of our train, I find our driver waiting for our arrival. When we arrived at the small hotel, which we had chosen, we got the first disappointment. True, the location was very beautiful, on top of a cliff on a wide beach in which only fully dressed women were bathing. Here I certainly did not foresee women in a swimsuit in front of the fishermen who put their nets at the end of the sand.

The hotel was far from everything. It was not that we were looking for a lot of activity nearby. We have the option to go out to eat, dine or simply go for a walk. Besides the weather forecast was not very favorable, and that the probability of rains was high, as well as that of storms.

If the hotel had a pool or a cozy room, we probably would not have left, but the bed was too hard. The air conditioning was turned off every time the air or rain left the hotel in darkness. So it was clear to us that we had to start looking for options for the unexpected change of plans.

After passing turmeric, indigo and lime villages, piles of small bananas, geriatric Ambassador cars and sickle and hammer posters of the still influential communist party, we reached the district of Kasaragod. We arrived at a hotel cottage with Ayurvedic treatments with thatch-like thatched roofs, among the thunderous applause of a tropical storm.

You bring us luck, says a local, who welcome us with a bindi of kumkum powder and garlands of jasmine flowers. The gods and the monsoon came with you. We spent the day practicing yoga and lying in hammocks or swim in an endless pool, with the nearby waves lapping at us. For dinner, we have rice and fresh fish at the beach restaurant.

Our next stop was Tellicherry, an ancient colonial commercial port. The three hours drive took us between watercourses, kettuvallam (traditional rowboats), and extraordinary trees. We pass through dusty roads where street vendors sold palm sugar juice, while Myna birds, vultures, kites fly in circles. We stay in a colonial house. It has giant sized bedrooms, family antiques, and poster beds, with nutmeg trees, jackfruit and papaya in the garden.

As we sat on the veranda, overlooking the sea and coastal road below, we were served with subtle delicate dishes. We eat boiled coconut seafood, bitter gourd with mixtures of alchemical spices, potato, and chickpeas. That afternoon from the pool, something suddenly fell on my head.

Is it a coconut? It turned out to be an "eagle dive", perhaps having spied their reflection in the sunglasses perched on my head. His attack happened too quickly to be scary and, later, his claw was less painful than our rice. Sandalwood incense burned and a lizard crawled up to the wall.

In the evening, we go for a stroll through the fish market a few minutes from our homestay. We passed stalls selling banana flowers, chopsticks, and tapioca root. In an alley occupied by stringed baskets, sharks, and catfish, men were seated on their sides wiping shimmering mists of iridescent green. Men stood in a group on the beach, bargaining for the auction of the fish, while old boats carried their prey.

At the time of dinner, we go to a nearby restaurant and wait foolishly to sit down among crowds of men dressed in long dhoti in under the blasting fans. In the end, we understand the system. Aspiring diners bought the meal tickets and then crowded around anyone who was about to finish eating. Soon we were eating rice and delicious fish curry with coconut on stainless steel thali plates. 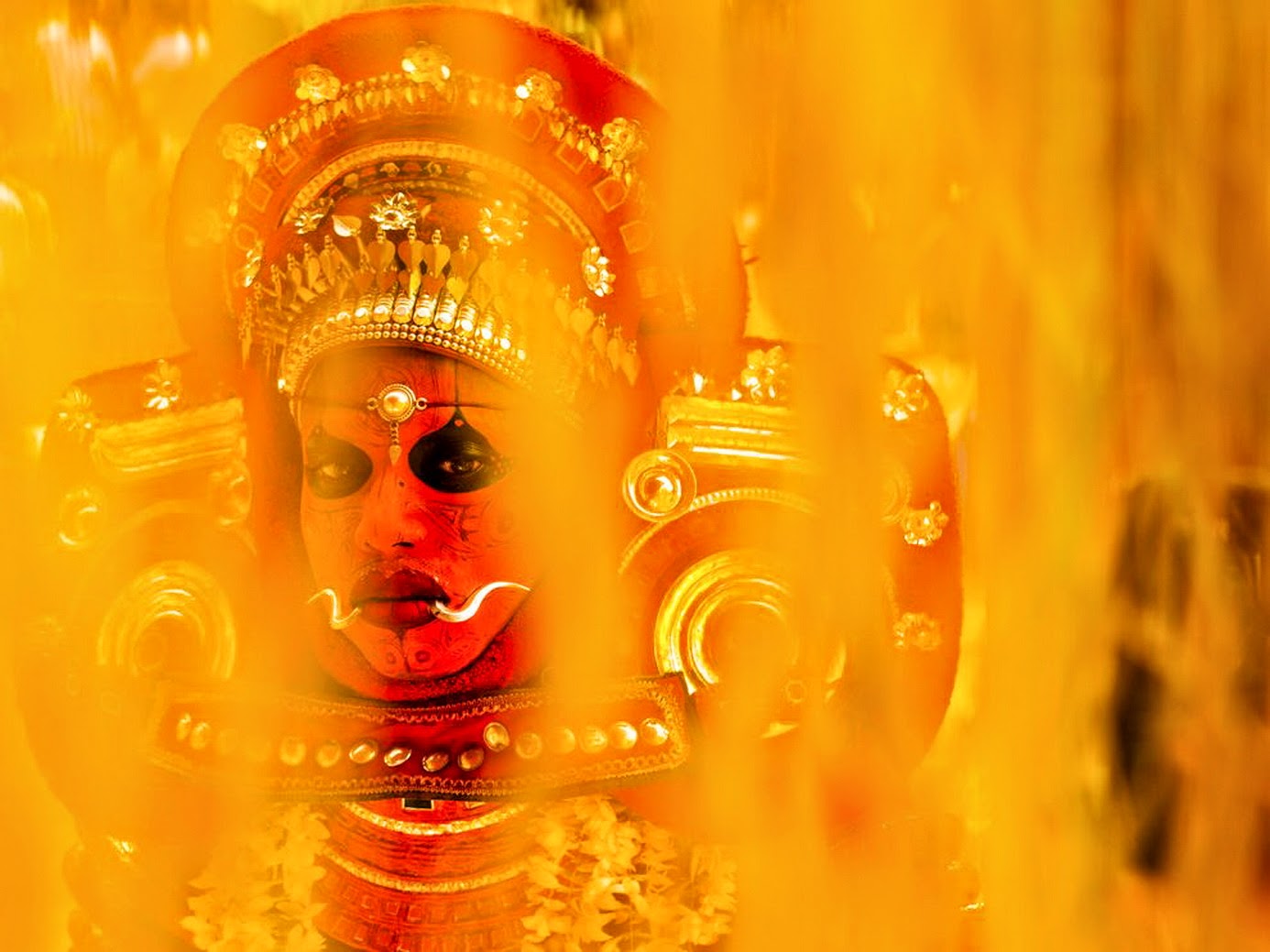 It is 4 AM, and the sky is still black. But first, we had to go down to the village to see the Theyyam ritual. I was not sure what we were going to find. I had read something about it, but I did not know what it would really be. I understood that most of the time this ritual between artistic and religious fervor is celebrated in the woods.

We saw it in the center of the city, in an open and covered area where when we arrived the event had already begun. A good number of locals was already watching what happened there. Despite the hour, a crowd has gathered near the Neeliyar Bhagavathi temple. Onlookers hold their breath, tense and expectant. Young and old alike cluster around a small, sandy ring.

Frenzied drummers begin beating a drum in perfect synchronicity. Young priests light palm frond torches, swishing embers off into the air. Older priests in crisp white lungi, stand in front of a small temple, staring sternly. We mixed with the locals who were there to observe what was happening. Suddenly, the collective breath is released, and a sense of awe fills the void.

The god has arrived. The Kutty Theyyam can begin. Theyyam refers to both the ceremony and the hero or divinity that participates in it. There are more than 400 different ones, each with a different costume. The makeup, bracelets, bells, and headdresses are very striking.

Kutty, the main god of the ritual, stands atop a wooden stool at the center of the ring. Two young priests hold his hands, steadying him as he circles in a tight, stomping dance to the drums. Bells and bangles clatter as he rattles his feet between rotations. He looms over the crowd, reminiscent of a giant snake poised to make a kill.

Suddenly, he leaps off the stool and begins spinning like an off-kilter top in the center of the sand pit. As he spins, his costume catches the torchlight, blinding eyes with its bright shimmer and sparkle. It is another homage to the natural world. His immense costume resembles a divine peacock with its shining red fan secured to a boxy skirt bottom.

The gods face paint is equally as ornate. The wide eyes are sunken in black pits, while the rest of his face is a vivid orange. Red designs spider across his face, so delicate they are almost invisible. The overall effect is distinctly supernatural.

Soon we realized that the "actor", to call it in some way, happens to feel possessed by the deity he represents and blesses all those present constantly. The drums sound and the "god" dances frantically to the rhythm of that sound.

Kutty spins for what feels like ages. Sometimes he spins so quickly it is hard to focus in the low light. Other times, he spins slowly, as though drunk or dazed. Members of the crowd cautiously approach him bearing crumpled rupee notes, pressing them into the god's hands for a blessing as he continues to spin.

Occasionally he lurches dangerously close to the crowd, and the young priests with palm torches swing them at him to keep him in his sacred circle. Other times, the men join hands with Kutty, leaning in for support as they hop around in a rapid circle.

Finally, Kutty dashes to the front of the temple, walking back and forth several times before finally collapsing into a seat before the priests. Young boys fan his sweating body with towels as the old priests bring him offerings of food and rice. After the whole vibrant show and the blessings to those present, one of the musicians left. He approaches with a bag so that each one deposited money that one considered appropriate.

As Kutty catches his breath, the crowd begins to disperse. Some move away to chat and compare photos with friends, while others move forward to whisper to the god, asking for blessings and advice.

A blanket of stillness settles over the temple as a lavender sky signals the arrival of the sun. It is five in the morning, but this Theyyam ritual is far from over. I cannot say how much time we spent there. I was so self-absorbed and surprised by what happened in front of us that I do not know if it was ten minutes or an hour.

When we came back to the place where we stay, we decided to go down to the seashore to take a walk. Again we saw women with their children enjoying the sea. Some posed for some photos. Others, with a smile, declined the request to be photographed.

We continued the walk and found what was missing to be clear that this was not the beach we had dreamed of. And now what? Well, after having a beer, we wait for the sunset. Looking through the Kerala travel guide we decided that it would be best to head for one of the national parks of North Kerala to Wayanad. The guide mentions that one can see forests, tea plantations and even and with good luck, and tigers.

When the sun began to set we already knew where our trip would continue. Already relaxed we sat down to enjoy the light breeze that came from the sea and that was when thunder began to be heard and soon began to pour. We had dinner under the roof surrounded by the noise and finished the rice and Nadan Kozhi curry with chicken.

There was nothing to do but go to the small and uncomfortable room. It was hot. The light was constantly going. The mattress was hard. The air conditioning did not work and when opening the window the probability of mosquitoes and other insects entering was high.

It dawned sunny in Kannur although with clouds on the horizon. After breakfast, we paid our bill and headed to a nearby beach to see something else since we had reached that place. Again we saw a beautiful beach but in which we cannot imagine enjoying the sea and the sun.

Adios Kannur, we'll see what Wayanad has to offer.