Jamaica is a big island and in a week you will not see a tenth of what it is. It has many corners to discover. This first trip, I loved it and I do not doubt that I will repeat, but with more days. Having said that, I tell you that this trip has been made by chance and without any planning. One day I went to the agency of a friend who always takes me out on trips. He offered it to me, and without thinking about it, we went to Jamaica.

We left for Jamaica. In total it was about 10 hours of flight until we reach the international airport of Montego Bay. Once in Montego Bay, we get off the plane and walk along a long corridor until we reach the immigration counters. We present our passport and a survey paper about the reasons for our trip and some other questions, which we have previously filled in.

Once we collected our bags, we left the airport and the tour operator was waiting for us with lists of travelers and hotels to distribute on buses. Just approaching the driver who was carrying the suitcases, they were already offering me marijuana. We got on the bus to the hotel that took us an hour and a half.

We arrived at the hotel, like a herd of little lambs, all lined up, to receive the power bracelet, the keys to the room and the key to the safe. And a refreshing fruit punch, with rum! Before, on the bus, the girl who picked us up gave each of us an envelope with the towel cards and a diptych, with the hotel map, restaurants, and schedules.

We arrive at the room, take a shower and go for dinner with a buffet waiting for us. I have to say that the buffet disappointed me a lot.

Well, after resting after the first day we got up at 6:30 to enjoy the first excursion of the week. We were preparing to make the trip to Port Antonio. It is one of the less explored areas of the island. We were going to spend a full day seeing nature in all its splendor. It is perhaps the greenest and most voluptuous area of ​​the island. At 7.30, very punctual, the bus and the guide arrive, a Jamaican girl, who I must say was very nice and nice to us. To not make the trip very long, we first stopped at a roadside bar, which just looked like that. Behind it hid a spectacular natural beach, where we could have a beer produced in the country, stretch our legs and take pictures.

After this break, we continued to Port Antonio, where we arrive at a market where we stop to buy crafts and souvenirs. She also showed us the house of a retired cruise ship captain. Then we got on the bus to reach the incredible Blue Lagoon, where the famous movie of the same name starring Brooke Shields was filmed. It is a lake that is submerged up to 80 meters without touching bottom. It is a turquoise blue lake, in the middle of the jungle. Here hot and cold water currents mix, and where we can bathe without fear. After the bath, we went to a nearby beach, La Playa del Frances. There we ate at a buffet that we had prepared and then go for a bath, sunbathe and relax.

After eating, bathing, sunbathing and resting we went to visit the Somerset waterfalls. They also seemed spectacular. I had never seen a river with a waterfall with turquoise waters. At the end of the route that we take along a path parallel to the river, we had a little boat waiting for us. A Jamaican gentleman takes us with the little boat to the hidden waterfall, which we cross and can see from behind.

We were arriving at the end of the tour. We returned by coach to the hotel when the bus stopped at a fruit stand at the foot of the road for whoever wanted to go down to try a coconut. I went down, and there was a Jamaican gentleman, who for a dollar, took one of his coconuts. With a saber he peeled it, leaving a small hole where to stick a straw to drink the coconut water. I must say that I liked it. It was already 6 pm and we returned to the hotel, to give us a restorative shower and to dine at the buffet. We had to be on the show with its corresponding daiquiris and other tastings of combined. 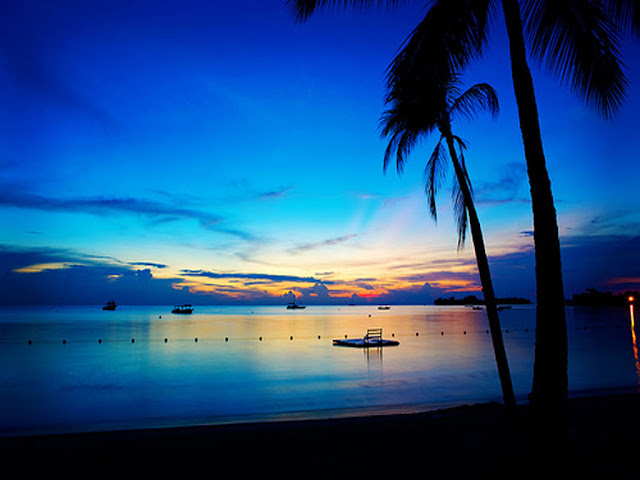 The third day arrived when we had planned two excursions, one in the morning and the other in the afternoon. In the morning, as usual, at 6.30 o'clock our eyes opened. We take shower and have breakfast. At 8 they came to pick us up. What was our surprise, that day we were only 4 people for the excursion. The first thing I thought, is that everyone knew something about that excursion that we did not know that it was not worth the excursions or something similar. Later I changed my mind and I was glad that we were only four. It was an excursion with a Cuban guide. Well that day, we went to the province of Montenegro Bay, specifically to Falmouth, to the little village of Martha Brae. It is the rafting center of Jamaica, by the river that bears the same name as the town. The river is 48 km long and the descent covers 5 km of navigable waters that flow through a lush landscape. It is a very calm and relaxing descent, in rafts made with bamboo, by hand, and with capacity for two people. The best of all is that it is like a kind of Venice, with a Jamaican gondolier. While we sail in the middle of the silence of the jungle, he explain things that we see in your path. At the end of the descent we stop at a bar that is in the landing place and we take another beer from the country and also buy handicrafts made with bamboo at a good price, after bargaining.

Next, we go to the caves of Runaway Bay and Green Grotto. They are caves that are located on the outskirts of Discovery Bay where Columbus set foot on land for the first time upon arriving in Jamaica. They are a complex of grottos and caves that penetrate 16 km into the interior of the earth. We put on our hats and protection helmets, to avoid blows, and guano gifts from the bat colony that live inside. We toured the caves with a guide who explained curiosities, since there are paintings of the Arawaks Indians, which are not very well preserved, the stories of stalactites and stalagmites. Inside the grotto there is a descent, by stairs, from where we go to an underground lake, with crystal clear water, in which visitors could bathe before, now prohibited.

At 1:00 p.m. we were already at the hotel to eat. After a little rest, until 5:40 pm, awaited us another more impressive excursion. It was to the luminous lagoon. We came to pick up the minibus, because in the afternoon we were the same 4 as in the morning. The same, it was an intimate excursion. We go to the luminous lagoon. It has that name since in it live some microorganisms (dinoflagellates) that during the day accumulate energy. During the night they detach by rubbing with any object like fish, boats, and people swimming.

The bus took us along the north coast to the lagoon (past Montego Bay). We arrived during the day and we had to wait until nightfall, since it gets dark at about 7 o'clock. Well, we took advantage, as we meet a very nice customer from the pier bar. He invited us to a beer each. A little later, they offered to take us a fruit punch with rum and fried banana appetizers that looked like potato chips.

In the evening we went to the dock where the boat that would take us through the lagoon awaited us. They told us that if we had a bottle, we could take a sample of water. The microorganism survives about 5 days. It was fun because we see the silhouette of the fish when they get scared and change speed. They let us bathe, and I bathe, although the bottom is not very deep and muddy. It really gave me a bit of disgust but only to see how my body came out a blue aura. It was worth the pain. Then they dry me and I try to immortalize the wake of light left by the boat. It is a very difficult effect to capture with the camera.

After the guide gave us several turns demonstrating the luminescence of the microorganisms, we return to the hotel to dine and enjoy the cocktails.

Day 4: Last excursion and last trip of the trip!

The fourth day arrived and that day we had scheduled the trip to the waterfalls of Dunn's River. That day the tour was at 1:30 pm, so in the morning we were on the beach until 12. We had our lunch there. Punctually we were picked up. Dunn's River Falls is the most popular excursion of all. It is about 15 minutes or less we arrived at the place. It is like a kind of private place, where the guide gives us the entrance ticket and we pass through the ticket office and they put a stamp in our hand. Before entering and once inside it is full of souvenir stalls (with inflated prices). After seeing the waterfalls we go to the village for shopping. We enter the park and head towards the bottom of the waterfalls by stairs where there are also viewpoints. We arrived at the beach, where the waterfalls flow, and then (which I did not like) they put us in line and all of us hold hands to climb the waterfalls with a guide from the park.

Personally, I think it's easier to go up for free than in a chain, but, they have it set up and that's it. As we go up the waterfalls, there is another type of park. We make different stops during the ascent and one can bathe. The truth is that this excursion pleased me a lot. It is entertaining and refreshing and the landscape is worth observing. Once finished the waterfalls and well dried, we went to Ocho Rios town. It was the day we took to buy the rum and more things in the store where they took us because they had good prices. Once we finished, we were all at the door, observing the city, until then we were the ones observed by all who passed by.

Then they took us to another closed area of ​​shops, but hey, it was roll souvenir shops, run by Indians. I was looking at several things, and well, they are souvenir type things. After shopping we get back to the hotel and rest.

Well basically this is my diary of my trip to Jamaica. I must say that I was in love with Jamaica and the few people there with whom I could create a little confidence seemed great people.