At the end of November, the Christmas markets of northern Europe are very nice and interesting to visit. Belgium, specifically Brussels and the Wallonia region, does not escape from that fame. I heard about how beautiful the Christmas markets in Belgium and Brussels had been. Since then I was left with the desire not to have gone a little before to see them.

The arrival was at 14:30. We picked up the rental car and left for Brussels. The hotel is next to the Grand Place, 12 km from the airport. Well, that journey took us more than three-quarters of an hour. Between checking in at the hotel and going outside, it was already 4:00 pm.

By the river, we could not miss the Grand Place beautifully decorated before Christmas. In less than 300 meters we have several very important points of the city. We took the street next to the town hall and we passed by the statue of de Everard T'serclaes, made in bronze which is said to give Good luck by touching the arm.

We went through the Tintin mural again. Upon returning to the Grand Place we went through the chocolate shop. In this shop, they offer a guided tour and show the manufacturing process as well as the transformation that the cocoa undergoes until it becomes a chocolate pill. It was all very pleasant. We arrived at the end of the guided tour. When we told her that we had a travel blog and that we wanted to see the chocolate process, the store manager gave us an explanation that is well worth cataloging as a travel experience.

When leaving it was already very dark, despite being six o'clock. We were ready to see the Christmas markets at their best in the darkness. And that is what it is about, illuminated stops, fixed and intermittent lights, and people all wanting to have fun. We started again at the Grand Place with its play of lights and music.

We go down to the Church of San Nicolas, with several stops in front. We crossed the building of the Stock Exchange, profusely illuminated. We continued in the direction towards the square of Santa Caterina, where is the nucleus of Christmas. This long square contains everything we can expect from a Christmas market.

More than plaza it is a long and wide boulevard. There are stations of hot wine, typical food, and Christmas gifts, that begin in front of the church of the same name. Then we found the ice rink. But what I most wanted to try was the Ferris wheel. As we can see in the ticket data, it is 55 meters high. From its height, we can see the entire Place Sainte-Catherine in its extension. In fact, it is so high that we saw almost the city, and even the Atomium illuminated in the distance.

Next, to the Ferris wheel, a stop, and a long inflatable slide made the kids delight. We cannot leave without trying a cotton candy and without seeing Santa's reindeer. Seeing so many fast food stops we went hungry. After a day of travel, airport, transfers, and visits, we deserved a good restaurant, and, why not? We go to one of the most emblematic sites of the city, the Galeries Saint Hubert.

The Hubert was the first commercial galleries in Europe. They are home to the best shops, chocolatiers, jewelers, and restaurants in the city, all under its glass dome that reminds us a bit of the Milanese Gallery of Victor Emmanuel II, although this one is much smaller.

Inside the galleries, we saw a restaurant that we found very attractive. It was quite busy with local people and was not a typical tourist restaurant like the ones that are knocking on the Grand Place. We got in and, the truth is we dined well. The hotel was very close to the Hubert Galleries. So after this copious dinner, we decided to go to rest, as the Christmas markets of Liege await us tomorrow. 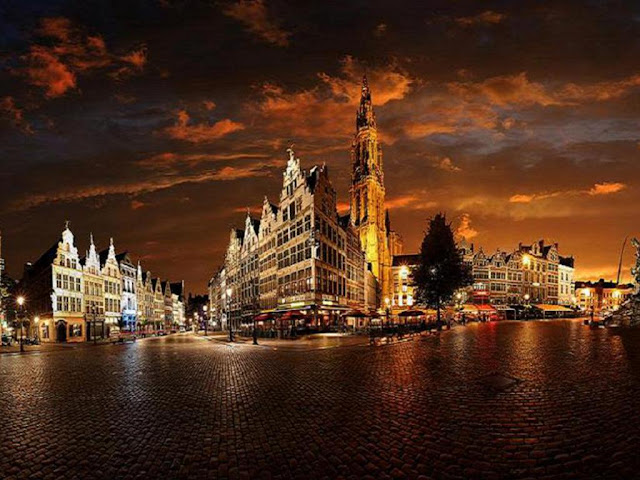 Early morning we start to Liege and enter the hotel first. So we have all day to enjoy this city that at Christmas becomes the Christmas village par excellence. It is the oldest and largest Christmas market in the country. As they have quite extensive schedules, we decided to take a tour to see them in the afternoon. Some had typical products such as chocolates, sweets, and marzipan. Others have the beer and mulled wine. We went first to the Saint-Paul cathedral, in the heart of the city.

But what interests us this Christmas is its place. There they have set up a market and a large ice rink, not as big as Brussels. Once we have crossed the three places to probe the territory, we go to the river that has given life to this city and to a few neighbors, the Meuse.

On its banks, there is a market, very famous in the area, the market of La Batte. Here we find everything expected from the street markets. There are clothes, various appliances, electronic gadgets and accessories, fast food and people. Many people wander around trying to locate something that catches their attention or simply pass the time.

After a while, we went to eat at the restaurant. The food is delicious although somewhat expensive for our pockets. We go again to the St. Lambert square to the Christmas Market, to see it at night. We climb on the Ferris wheel to see spectacular views. We go through the almost 200 stands of different products. We finish the night in the best way in a spectacular restaurant.

We went back through the neighborhood of Le Carre, where there is a whole night party. This night it is full of students with painted gowns who celebrate Christmas with drinks. We decided to go to rest as tomorrow Durbuy awaits us, the smallest city in the world.