Mexican cuisine for many years has been internationalized and has always been a regular presence in the American fast food chains. However, in recent years this trend has spread. Today, when strolling through the streets of downtown Mexico City, anyone can realize the high number of locals dedicated to this meal.

Beyond the fast food restaurants, Mexican cuisine is an excellent resource to enjoy a dinner themed with friends. Its main virtues are its affordability, originality and, if the night lengthens, the ability to accompany them with a few Mexican beers or shots of tequila.

For these reasons, from soul, heart, and life we offer a guide to make delicious burritos with which to surprise and succeed at the next meeting with colleagues. 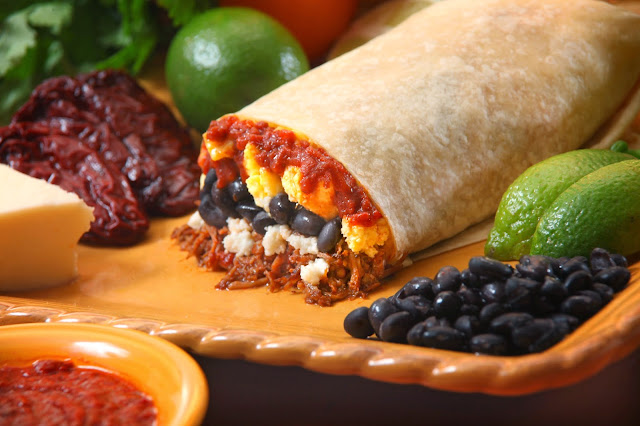 What are the burritos?

Fajitas, enchiladas, quesadillas, tacos, burritos. Many are the terms we use interchangeably for Mexican food, but do not distinguish between them.

The main feature of the burrito is the way they seal it. Admittedly it is not easy. Sometimes there are different theories about the differential aspects of each. The quesadillas and enchiladas are the most easily distinguishable. The first is characterized by their main ingredient of cheese. They are bent (the filling is placed between two tortillas) and triangular cuts are usually carried out. Meanwhile, enchiladas stand out as being bathed in a sauce, usually chili.

But the difference between fajita, burrito and taco is more complicated. First we will focus on the taco, which actually refers to a corn tortilla rolled with food inside, but not their ingredients. While, the wad is rolled tortilla and stuffed with meat cut into thin strips.

And the burrito and fajita differs from its form of preparation, as to wrap one side is closed, something that does not occur in the fajita (both ends are open). It is also said that to be called burrito, beans needs to be inside.

However, as we explained Lexiofiles, the burrito is a product whose origin is located in Mexico, particularly in the north, in Chihuahua, but then has spread much more to Texas than in the south of the Mexican country. These are the reasons why this food can be considered more tex-mex than purely Mexican.

This is a basic aspect when making the burrito. Generally wheat or corn is used, although in this case the first will be better since then it will be more elastic. In order to differentiate a trick the corn have a yellowish color.

As in any other prescription, quality is a very important aspect. You can choose chicken or pork, but must ensure that the butcher give the tenderest meat. In case you opt for chicken, a very comfortable option is to cook by baking. However, pork is best cooked over low heat. It is advisable to be aware of the meat so that it is juicy without being tough, but never dry.

Of course, when pouring salt and pepper, better bit much. Overdo the seasoning to the point where you no longer know meat is a common mistake, so it is preferable to dose, try and decide the point that is considered optimal to taste.

Many people, for convenience, choose to serve white rice. But if you want to enjoy condiment tastier, it is possible to cook a classic Mexico rice . In the blog La Cocina Mexicana Pily a simple recipe in which a sauce with chopped garlic and onion is done until rice is browned and then boiled in chicken broth explained. Carrots or peas can be added.

The beans are another basic aspect of burritos and Mexican food. There are different variants of this bean, but the most prominent, in this case is usually black and pints. As to how to consume, there are different alternatives. At the laziest it will not be difficult to find them already cooked in any supermarket chain, but no doubt that will be better and be healthier if cooked at home.

The easiest way will cook them in water with onion and garlic. But it is also common eating refried, in which the initial process is the same, and once cooked fried in oil and ground into a denser mass.

Here come into play the tastes of each. There are numerous saucesmore or less spicy flavor. The easiest thing to do at home is the tomato, as there are so just chop with onions, a pinch of salt and oil. If you want to give a strong touch, you can add jalapenos.

Another companion very usual is the guacamole, whose recipe, despite being a product that is often purchased already prepared, is quite simple. Only ripe avocado, lemon, salt and onion is needed. Onion and avocado (skinless) is chopped and added salt and lemon to taste. Some people add some tomato and garlic.

The cheese may be the stooge, but not as the main actor. The right choice is a cheese that melts easily, so the mild Cheddar is a more logical choice. To prepare, best on the tortilla, to be heated in the oven or skillet over low heat for two to five minutes, until cheese is melted and the tortilla is flexible.

There's nothing left! But should not err in a last step, which is more delicate than an inexperienced can believe. Once warmed tortilla with melted cheese must add the remaining ingredients. The best order to place it: beans, rice, meat and finally sauces desired. Here it is where comes in the skill and experience of each, because we must not overfilling to prevent can not close or leave it empty.

The clumsiest may be close at both ends and wrap with aluminum foil to eat more easily. Of course, they should be aware that this can lift the laughter and criticism from experts and purists.

The burrito or taco de harina or flour taco is a dish that belongs to the Mexican cuisine and consists of a rolled wheat flour tortilla generally filled with chicken or pork pieces, roast beef and refried beans, which is then closed resulting in a thin shape.

The burrito is a typical Mexican street food and one of the symbols of the Tex Mex cuisine and consists of a tortilla corn filled with stewed meat, vegetables such as lettuce and tomatoes, corn, beans and hot spices, then served rolled up and accompanied by sauces such as guacamole, made with avocado, sour cream or other cheese-based sauces, garlic or hot peppers.

In the United States the filling also includes other ingredients such as rice, salsa and then the thickness of the burrito increases considerably. The tortilla flour is usually grilled slightly, so as to make it softer and more flexible. An American industrial version is made from corn flour.

In contrast, a taco is generally formed by folding a tortilla in half around the meat, leaving the semicircular perimeter open. The latter is described as the American Tex-Mex version of taco. In Mexico, the taco is always done by rolling the tortilla around the filling, which can be practically any food or stew.

The word burrito is identified as a regional term of Guanajuato and is defined as a rolled tortilla, with meat or other food inside, which in Yucatan they call as bake, and in Cuernavaca as taco. Also, in some regions of Mexico as is the state of Tamaulipas, this type of food is known as flute. The name burrito is possibly derived from the appearance of rolled wheat tortilla, which vaguely resembles the donkey's ear, or the coiled blankets and packs that the donkeys carry.

There are many variants of the Mexican burritos, both for the filling and for size, consistency etc. Let's see some:

Fajita : in this case the tortilla acts as a base, like a plate, remaining open and above it are served meat and vegetables that is typical of Texas;

Chimichanga: A native of Mexico that spread to Texas, it is a burrito wrapped with a filling and then fried in oil;

Mission burrito : San Francisco burrito is larger and is also stuffed with rice, as well as meat and beans;

Breakfast burrito is served in the US as breakfast, containing eggs, potatoes and bacon and served with chili sauce or cheese.

What I propose is the classic Mexican burrito recipe. The meat can be chicken, pork or a mix of the two, according to taste. To give a more tasty touch, in Mexico people also use the chorizo, a spicy sausage, which is hard to find and can be replaced by spicy sausage or Calabrian nduja.

Moreover, in Mexico they abound with spicy recipes with jalapenos or habaneros, which are among the hottest varieties in the world, but people are accustomed to spicy tastes from an early age. Everyone can adjust according to their own limits of endurance of spiciness.

In a pan fry onions and bell pepper, cut into thin strips. Then add the sausage and then the meat. Deglaze with the tequila and cook for a few minutes.

When all the liquid is absorbed add the diced tomatoes, chopped garlic, paprika, chopped chili, salt and pepper and cook for about 10 minutes.

Prepare each burrito by resting above each tortilla a lettuce leaf, at the center, then add the mixture with the meat and roll up each tortilla on itself, closing the edges inward.

You can eat the burrito with your hands by cutting into slices, accompanied by salsa, sour cream , chili sauce or guacamole.