One of the most typical dishes of France and even more of Nantes and the whole area around it are the crepes. It is a meal that can be coupled with whatever comes to mind, being able to eat sweet and savory and all meals. Pancakes are made with a very liquid mass, consisting of milk, eggs, some flour, and salt.

After mixing well, it is fried in a pan for a short minute, which is the time it takes to curdle the thin mass. Once the crepe is cast, you can accompany it with anything, among which we find several supplements.

There are pancakes with cream (and a drop of hot white chocolate). There are savory pancakes with fried egg and bacon, in a kind of sandwich. You don't have a choice but to use cutlery because otherwise, it will spill.

And as you can see, the crepes are like bread. In Saint Nazaire, there are specialized local crepe shops, where they put some of these varieties and other rather more daring, with an extensive menu for visitors. In Nantes, there are several creperies where you can eat very well and some of them, for a very good price.

I was in Nantes before the Christmas holidays that coincided with the Christmas market in the city. I ate in the middle of a central square a couple of crepes made in one of the stalls there. I remember it took me less than five euros, about three or three and a half. And this if I remember correctly, was crepes with a fairly thin crust, but consistent with the time I ate with hot chocolate cream, and it was wonderful.

Some of the creperies of the city of Nantes are the creperie de Sainte Croix, La Cordielèrie, which is probably the best known. The Heb-Ken creperie is located on a street I do not remember but I do remember it is fairly central. Au Vieux Quimper is another local one who makes good crepes.

In short, the world of crepe is a very interesting world gastronomically speaking. And who travel, live or pass through France, is required to eat a French crepe in all its variants, like who's going to Valencia is forced to eat paella or who is going to Bilbao is forced to eat cod.

Enjoy France and its magnificent crepes!

The pancakes are typical of North American cuisine and, with many variations, in other parts of the world that are normally prepared for breakfast or brunch and served with honey or maple syrup, a natural sweetener with a taste reminiscent of honey, fresh fruit or jam. Easy and fast to implement, they are perfect for a brunch with friends. It is similar to the crepe.

The recipe to prepare the pancake is fast and easy to implement. It is enough to cook in the pan for a few minutes and the batter and the cake are ready to be served hot.

If you are planning a trip to the US, get ready to enjoy traditional American breakfast with delicious pancakes, and tasty small spongy discs that are waiting to be stuffed with more inviting treats. In the United States, the pancakes are also called hotcake, griddle cake or flapjack. British and Irish traditionally eat them during the Mardi Gras or Pancake Tuesday.

Pancakes similar to those in North America, but smaller, are in fact consumed in the British Isles and are called Scotch pancakes. In Australia and New Zealand are called pikelet. They are served with cream and jam or just with butter. In the States, this is called silver dollar pancakes. In Scotland, they are rarely served at breakfast, while on the other hand are considered sweet or dessert. English Pancakes are similar to French crepes, but the traditional recipe is accompanied by sugar and lemon.

In the Netherlands, the word Pannekoek is the literal translation of pancakes. The ingredients are the same as French crepe, but they cook less subtle. They are consumed as a second breakfast and in general, the restaurants selling pannenkoeken separate the list of those savory with cheese, ham, onions, ginger and those sweet with jam, raisins, and fruit. Simple Pannekoek is always available on the table with sugar syrup and powdered sugar.

Even in Argentina, Chile and Uruguay, it is very popular and is stuffed with fresh milk or manjar and are called panqueque.

But alongside this typical combination, we are allowed all possible variants, provided they are super delicious from the fresh fruit or syrup to creams to the chocolate sauces. Americans do not miss anything and often accompany the plate of pancakes with whipped cream tufts.

For sure you will have your mouth watering, unless you want to wait for breakfast and can also prepare pancakes for tea, from our recipe! For the sweet tooth, they may also be accompanied by peanut butter or chocolate spread and hazelnuts. However, there are some variants, also see that the addition of cinnamon or honey or the use of yogurt instead of milk.

The pancakes with Nutella are a gluttony that you cannot miss! I, after watching a video on facebook tried it with my classic dough. Well, you can use your homemade hazelnut cream spread too so as to make the healthiest recipe and adapted especially for the little ones. The thickness is due to the consistency of the dough and the presence of yeast. They can also be savory, with butter melted on warm pancakes, eggs or bacon.

If you like pancakes, you can also try them in other versions, such as cottage cheese with stewed quinces, chestnuts, and pomegranates or with chocolate chips and raspberry. It is advisable to consume the pancakes immediately or store in the refrigerator for a day at most. We do not recommend freezing. The dough can be kept in the refrigerator covered with plastic wrap for up to 12 hours.

For many of Disney readers, the pancakes are nothing but the pancakes of Donald, who like a good uncle prepared carefully for the three nephews Huey, Dewey, and Louie! 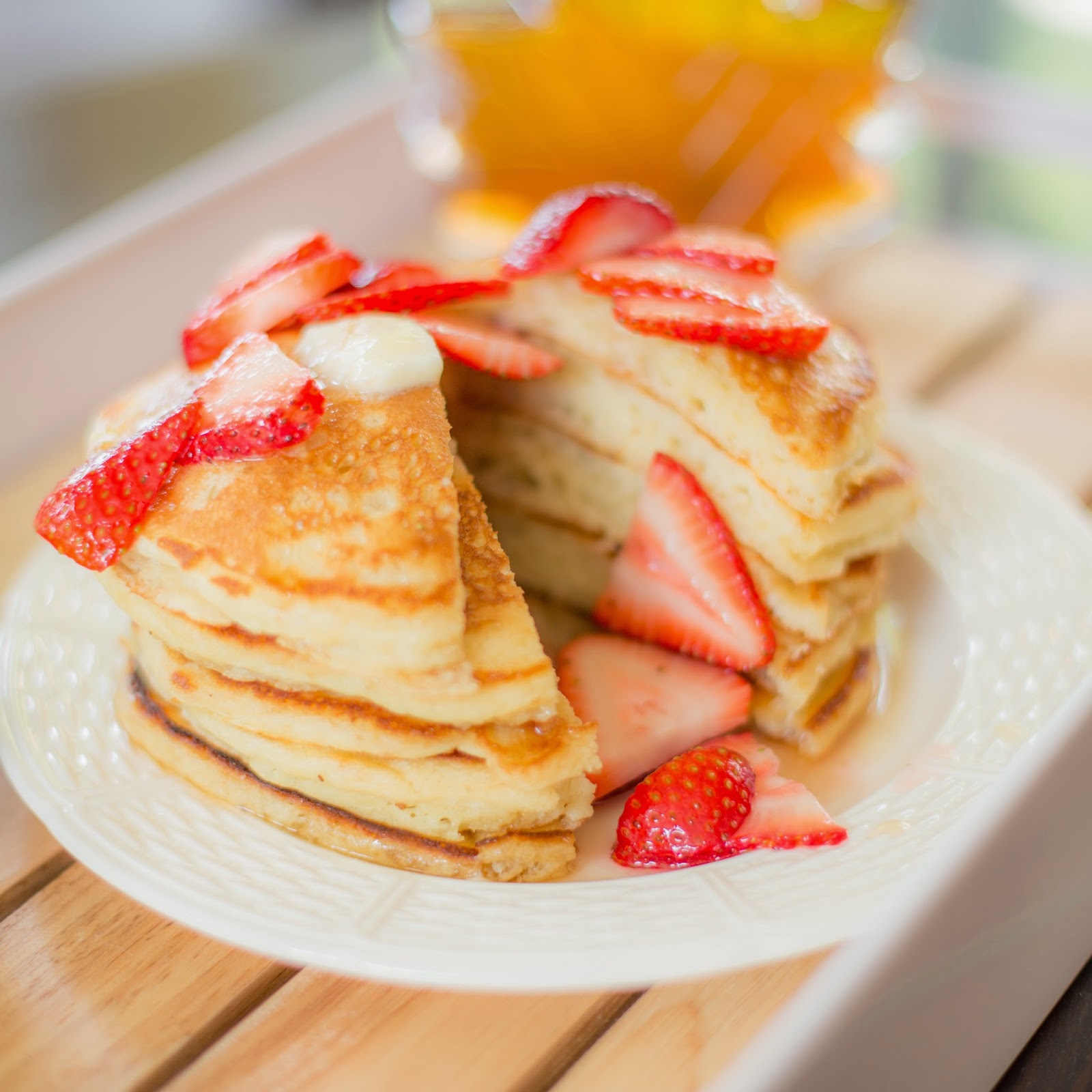 Mix the flour with the yeast and salt in a bowl. Sift all the mixture so that the batter of the American pancakes is fluffier and softer. We recommend using pastry flour, but if you don't have one, you can use another variety.

In a separate bowl, pour the egg and add the sugar. Beat until integrated and incorporate the glass of milk, the vanilla essence and the oil. Beat again until the mixture of the American pancakes is integrated. Transfer the dry ingredient mixture to the bowl with the liquid ingredients. Mix very well. We advise you to do it little by little so that it is easier for you to integrate the ingredients of these American pancakes. In this way, you will obtain a dough without lumps.

Put a non-stick frying pan to heat with a thread of oil. For easy-to-make homemade pancakes to come out fluffy and thick, we recommend that you use a small frying pan or a round metal pan. When hot, scoop up some homemade pancake batter with a ladle and cook over medium heat. When the edges of the fluffy pancakes begin to solidify, we turn them over with the help of a spatula and cook for a few more seconds. Your homemade pancakes will be ready!

You can accompany them with melted chocolate, honey, fruit jam, whatever you like the most!