One of those hot days in August I started looking for a destination in the north of Europe in Scandinavia. The first option, of course, was the Norwegian fjords or in Oslo. In September we had a few days off, but the prices were not within the margin I was looking for, so I continue with Stockholm and there the opportunity presents itself.

Many options came, such as combining Stockholm with Copenhagen, but the accommodation in Copenhagen was very expensive too. Another option was to combine Stockholm with other cities such as Gothenburg or Malmo, but finally we did not. Then I started looking for the hotel, which is expensive and I opted for a hostel.

It is the day of flight, and as I like it, without getting up early. It left at 10 in the morning from T3. The flight would have taken around 14 hours, but it took less. We landed at Terminal 2 of Arlanda airport, wanting to eat! There was nothing to eat. I do not know how the rest of the terminals will be, but this one was very small and did not have much.

So we went to get the tickets for the bus and we buy tickets at an information office in the same airport. There are several lines, but the one we chose was the one that went to the central station of the city. This line has the station as a last stop so it is very easy. This bus leaves from platform 6 as they told us in information, so we went there.

It was raining. The journey takes approximately 45 minutes, and there are some stops in between more in the outskirts. We arrived at the bus station (next to the subway and the train) and we went inside to look for something to eat. Not that it had much, but we found a small supermarket where to buy something.

These are some government stores for what they explained to me, which sell items such as sandwiches, wraps, sandwiches, sweets, potatoes, hot dogs, tobacco. There are also beverages (mostly alcohol-free, since in Sweden if they exceed 3 degrees they have to drink in a special place) and some medication without a prescription. So I bought a chicken wrap and avocado and leave!

I have to go down some escalators and was practically in Vasagatan Street. In this street, there is the train and metro station. For our hotel, we had to take that straight street, turning left. By the way, what a great invention of free roaming is so useful to have Google Maps there. Although at the airport and at the station you have maps of a lifetime but for people like me without any guide, it helps a lot.

Our first walk in the city was to go down the whole Drottninggatan street to go to Gamla Stan. The street of Drottninggatan is a pedestrian street. While walking this street, I see how they have statues of lions as a barrier across the street.

All straight, we arrive at the place where the Parliament and the bridge of Norrbro is located and we arrive at Gamla Stan. What is Gamla Stan? When I looked for information, I saw it on all sides as the most special thing in the city but I did not understand its beauty. It is an island where the historic center of the city is, dating from the 12th century.

Therefore, we find a neighborhood that has preserved its houses, streets, as they have been modified over the centuries. Today, nobody lives there. They are shops, restaurants and offices, but it is without a doubt, what is most worthwhile in the city. There are various monuments such as the Royal Palace, the Cathedral, the Nobel Museum.

We walked a little aimlessly because the next day we had the touristic tour there. The rain, which until now was a slight drizzle, became torrential so we decided to return. This time, we went over the Riksgatan bridge and walked along the lake shore, passing through the Opera and the National Museum, closed for renovations.

At this point, we realized that they were preparing for the Cultural Festival of the city. I do not know if for preparation or what, we witness a spectacular acrobat show. After seeing it, we decided to look for a place to have dinner since it was still raining and that night we were at 10 degrees! So we went to the restaurant that is in the Vasagatan street. 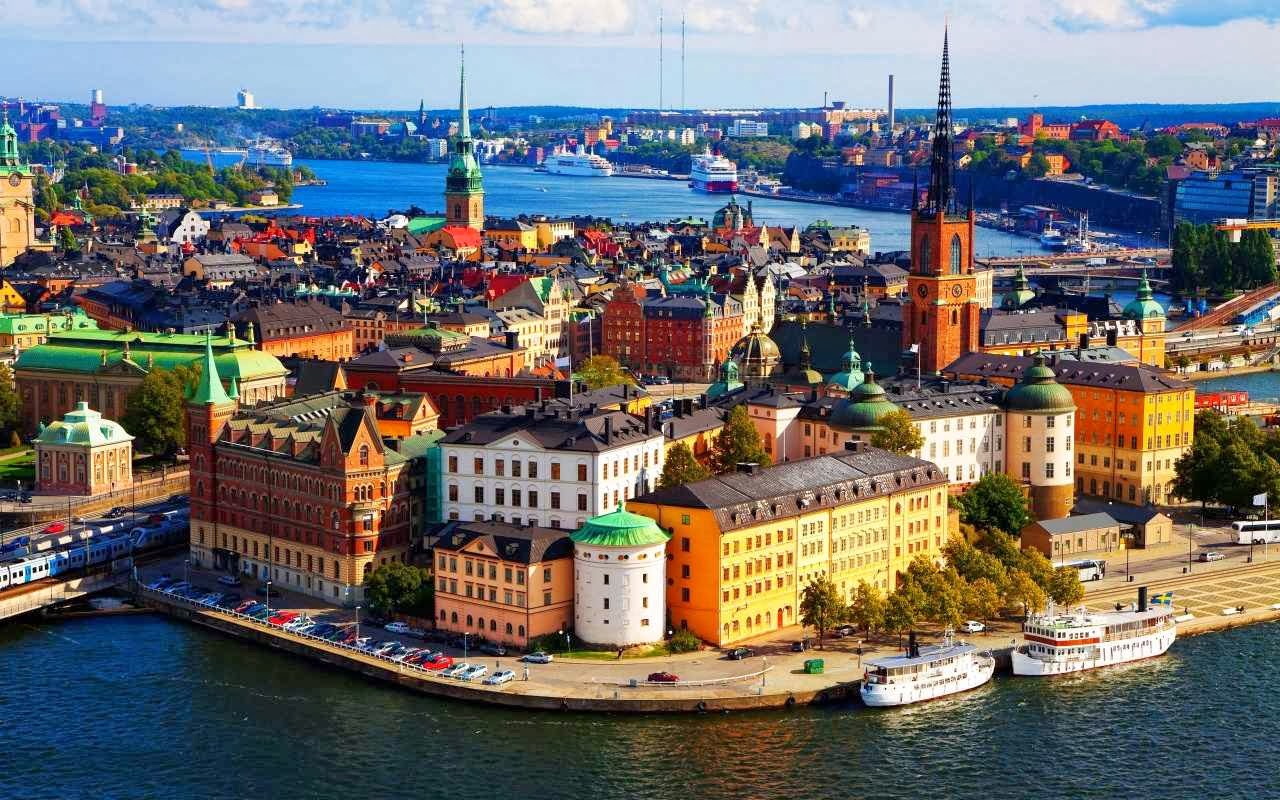 As in the rooms of these countries there are no blinds in the windows and since at this time the sun rises at 5 o'clock, we were already awake at 6 o'clock in the morning. So at 7 o'clock we shower and go to have breakfast. The hotel breakfast is simple with toast, jam, some cheese, coffee, milk, tea and little else, but it's worth it.

The Sun has come out! In fact, it was completely clear, as if the previous day had not existed! Yes, that day was cool again so with autumnal clothes we started the day! At 10 in the morning, every day, the free tour begins with Gamla Stan. They have another one that starts at 1 pm. As with these types of tours, they are free, but can have a guide for free. The tour is all on foot, with a duration of 2 hours.

The route began with the churches, the first being the Cathedral, called Storkyrkan, following the Finnish Church and the German Church. Just behind the Finnish Church (Finska Kyrkan) behind Bollhustappan street), in a garden, there is a tiny statue, called the Child that looks at the Moon by Liss Eriksson.

Speaking a little more about the neighborhood, the houses are all in ocher colors and the roofs vary from black, red or green, for climatological reasons. These houses are all made of wood and covered with paper, which in ancient times burned easily. The firefighters only came if they were insured.

The Nobel prizes also have two points in this neighborhood. They are decided each year in the restaurant Den Gyldene Freden which holds the record of being the restaurant that has not been closed, and everyone can attend. It also has the Nobel Museum in the Central Square.

Another curiosity of Gamla Stan is the narrowest street in Sweden, Marten Trotzig Grand, full of graffiti. Finishing with the curiosities of the neighborhood, there is a piece of Viking runes in the open air on Prastgatan Street, which makes that house the most expensive in the area without a doubt.

The tour ends just at 12, next to the Royal Palace. The changing of the guard consists of a person speaking a bit of the story in Swedish and in English narrating what is happening. It is not bad but without more.

After this, we went to eat in an Italian restaurant that we saw on the internet on the cheapest places to eat in Stockholm. It's next to the subway, on Munkbrogatan Street. It's buffet style, and the pasta dish is good. They have a water tap. Not bad, but it is not excellent.

To return, we returned by the bridge yesterday, where we saw better the House of Nobility. And we cross to another island where is the Riddarholmskyrkan, one of the most beautiful churches in the city. We did not enter. Of course, in this Church all the kings of Sweden are buried, with the exception of two.

In the afternoon, we decided to take a walk through the Sodermalm neighborhood, to the Medborgarplatsen square. This neighborhood, according to the guide is better proof of life in the city, since it has nothing touristy and today is the hipster neighborhood. Here, in addition, the novels of Stieg Larsson's Millennium saga were set.

This country stands out for its crime novels and series and there are tours that take through the places mentioned in the novels. The metro stop is Slussen, a little further away from our hotel, so we decided to take a 24-hour subway ticket. We went around and went to the two viewpoints in the neighborhood. One is more hidden and the other is more visited.

The hidden, is Monteliusvagen. In Hornsgatan street, we take the ramp, go down Bellmansgatan street. Once in the viewpoint we could enjoy the views of the whole area of ​​the old town or Gamla Stan and the island of the Djurgarden museum. The views, together with those of the Town Hall, are the best. After being there for a while, we went to the next viewpoint, which is next to the Slussen metro.

We went the other way, that I say that in a section where there is quite a climb. At the exit of the subway, there is a tunnel to go to an office building that has a sign called Gondolen. It is from the bar that has the views, but we do not need to consume anything. Once we enter the building, we have to take the elevator and go up to the 11th floor and from there we have to go up one more floor walking.

Once we had seen everything, we went to dinner at one of the stands in the Medborgarplatsen square. There they have a stand of sausages and Greek food, as well as several restaurants. In the stalls, the prices are more affordable. So we took something there and then, we went to Drottninggatan street to have a beer. With this we ended the day.