We travel to Madrid in Spain, a city full of unexpected views. It opens the eyes of those who not only looks at the top but also upwards. We landed early at Barajas airport from which we take the subway to the center of Madrid. The journey takes about 15 minutes. We have booked a hotel located only 20 meters from the metro station. It was near the golden triangle of Prado, Reina Sofia, and Thyssen-Bornemisza museums.


The magic of Madrid Christmas

After a quick shower, we dive into the city. To meet our hunger, with 2 euro, we eat a great Bocadillo (sandwich) with ham and a beer. Refreshed from the stage, we immediately visit the Plaza Mayor and Puerta del Sol. Both were beautiful. Plaza Mayor is more of a square. Puerta del Sol is more of a converging point of roads. Here is the infamous kilometer zero of the Spanish road network.

It is on the sidewalk in front of the Palace de la Comunidad de Madrid (former Post Office building). We then embark on one of the crowded streets that lead to the Gran Via. We stopped once again to eat the Boccadillos, french fries, and beer. We went up to the Retiro Park to take advantage of the beautiful sunny day, fearing the rain in the upcoming days.

The park is huge (118-hectare). At the entrance look at the map and decide for a goal. The risk is to walk without being able to see anything significant. We came across the Forest of Remembrance. It is a memorial consisting of 192 trees including cypress and olive trees. We also see the Palace of crystal and the Monument to Alfonso XII with the pond.

We left the park and headed to the Museo Reina Sofia on Saturday afternoon and Sunday is open free to the public. We took the outside glass elevator and we visited the museum, from the top floor to the first. Needless to say that the most evocative work and worth at least a fleeting look is Picasso's Guernica. I imagined smaller and instead takes up an entire wall of the room 206 on the second floor.

At about 6, we returned to the hotel to rest before the long evening. In Madrid, if you want to eat at a restaurant in regular times (between 8.30 and 9.30) I recommend you book in advance. We started with a list of recommended restaurants.

We tried the Valencian (meat and vegetables only) to fish and mixed vegetables. All the three were exquisite at fair prices (10 to 15 euro per person). Pending the paella, we ordered the appetizers of the cod fritters. Then the divine Manchego sheep cheese, and the croquettes with Croquetas de Jamon. To close the meal, we order the Catalan homemade cream, with Chardonnay.

After dinner, we made the last effort to the return to the hotel on foot. It was worth it because the alleys were beautiful. We often encountered squares and surprising nooks. The Plaza de Santa Ana was a meeting place for the Madrid nightlife. There was full of cafes where you can dine at affordable prices. 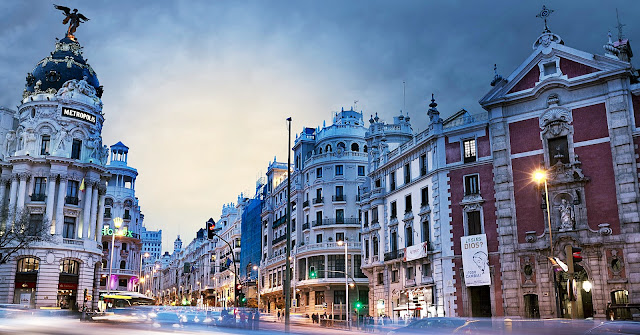 Churros and Flea Market in Madrid

The first destination was for the breakfast and the menu was the churros dipped in hot chocolate. Later, we went to the largest flea market in Europe which is only open on Sundays. It is in El Rastro.

Easy to find, it occupies an area that goes from Plaza Mayor in the Puerta de Toledo. Here every alley specializes in something from antiques, paintings, and fabrics. You can find items of interest without elbowing among the people.

We saw huge sandwiches costing only 3 euro. You'll have to find a niche in the square, where to eat them, but they say that they are a specialty. We made the mistake of not buying them right away because we were not yet hungry. Of course, once gone, we never returned and when we did it on Monday, we found it close.

From Rastro, we headed on foot to the Royal Palace and then to the Cathedral. For the palace there was a long line and given a short time, we admired it only from the outside. We instead visited the Cathedral, which does not excite us much. The only thing of note is the grandeur.

We put back on the march towards the Egyptian Temple of Debod. Along the way, we crossed the Plaza de Espana, where there is the fountain dedicated to Cervantes. There were statues of Don Quixote and Sancho Panza, Edificio Espana and the Tower of Madrid. Unfortunately, we did not know that the temple closes at 2 over the weekend in this period. The guard was adamant, even though it was 1:50 and we promised a quick look around, but no way!

Tired after walking and failures, we come back to Sol for lunch. After wandering in search of a place that was not already crowded, we went to one behind Plaza de Santa Ana. Unfortunately, given the time (almost 4) we could not eat their specialty, Cocido. So, we ate good croquettes and a platter of meats and cheeses. We wanted to find the energy to go and visit the Prado but the idea of walking did not allow our mind.

After a short rest at the hotel, we were again on the road again for dinner. The choice fell on one with spectacular Galician specialties. The largest and best-known is on Calle De Las Huertas and the other, to where we went, is in the street of Calle de Jesus.

There is an informal setting, with stools and a menu written on a palette of wood with colored chalks. We start with the Caldo Gallego, a delicious soup with sauerkraut, beans, and chorizo. We proceed with the Foliada Mollusques, a kind of sautéed mussels and clams with cream. Then comes Pulpo Gallego, an octopus with diced tomato and a boiled potato placed in the center.

For homemade desserts, we order the pudding. We take biscuits made of almond paste covered in chocolate. They serve with a Chupito, an excellent port in which to dip. In summary, if you spend 20 euro, you risk indigestion! We did not make a return to the center because the hotel's appeal was too strong.

We come across Calle de Las Huertas and then shot to the right, along the Paseo del Prado to Calle Atocha. At Paseo del Prado, there is the Caixaforum, the Museum of the Caixa de Espana Foundation.

Next day we get up early because we had planned from the outset to visit the city of Toledo taking the AV train. We paid the hotel bill and have breakfast at the Calle Del Doctor Drumen. After a cappuccino and fragrant croissants, we headed to Atocha station.

The station is well worth a visit with its Art Nouveau style roof in iron and glass. There is a tropical garden with a constant temperature of 24 degrees. Bad luck pursues us as we discovered that all trains between 10.20 and 12.20 were overflowing. So we had to give up because Toledo would have been ridiculous to go at 1 and start at 3.30 at best. So if you want to take a trip outside the city, book your ticket the day before.

As all the tourists flock outside the capital on Mondays, we had to improvise our program for the day. So we opted for the Plaza de Toros, in Calle Alcala, giving up the arena visits because it was raining. We see the outside to get the idea of the place that houses 25,000 paying spectators to see bullfighting!

Instead, we made a stop at Taurinos Museum, which was free of charge. There were displays of bullfighting memorabilia. It included blood-soaked clothes worn by matadors in the last bullfight of their career. After this tour, we headed in the Chueca district, north of Gran Via to enjoy the real nightlife. It got restored to its beauty after the degradation of the Franco period.

After a look at the colorful windows of the neighborhood, we headed to the San Miguel market. It is a structure of glass and cast iron, behind the Plaza Major.

The peculiarity of this market is, in fact, to eat the food for sale, in the raucous crowd of tourists and Madrileños. There were shops from that of the cheeses to that of the fish, to wine and so on. In short, if you are patient, you can eat fresh food at reasonable prices. After a tour, I take refuge in Plaza de Canalejas close to the Puerta del Sol. Here I could finally eat the Madrid Cocido, a kind of chickpeas soup with carrots, potatoes, and meat stew.

As time began to tighten, we did the last walk through the crowded streets of Madrid. We go to the souvenir shops of Calle Montera which are cheaper and get more choice. There is the usual regret for the things we could not see and the more reasons to come back soon. We packed up and headed to the airport. Hola!