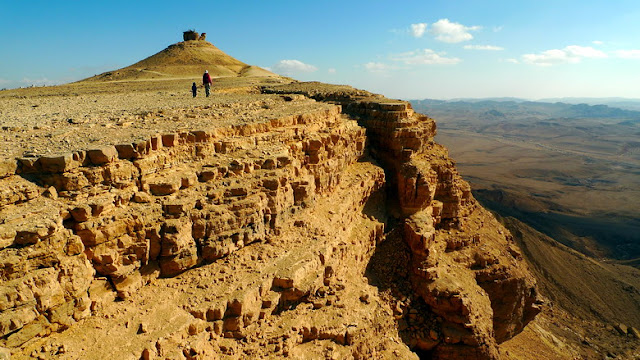 We decided to travel to Israel. We took the flight to Tel Aviv with a stopover in Istanbul. When checking in for the trip to Israel, the supervisor asks us if we have traveled to Jordan and if so, maybe they would not let us enter Israel. We take the boarding passes, and got on the plane to Istanbul, a comfortable flight of a few hours, arriving at 22:00.

Once there the main idea was to leave the airport for dinner in the center, but an employee told us that the center was two hours, and we decided to stay inside. While there we dined at a McDonalds and saw a lot of people. Once I had filled my stomach it was time to look for a place to lie down to sleep.

At dawn we went to the queue at the boarding gate. It is here where we can already observe in the waiting room some ultra-orthodox rabbi praying as if there was no tomorrow. We pass a control in which they ask the typical questions, like the reason for your trip, for how many days, and if we know someone.

Once over we go quietly out of the airport, and we decided to move to the hotel by taxi, since there is no shuttle. Going by train or bus seemed a little messy and we were tired. The journey is not long and we can see the architecture and landscapes of Tel Aviv. The taxi driver found it hard to find the apartment. Once there, we went through a reception that is on the first floor and received by a very friendly girl.

She was predisposed to give us all kinds of information and as it was early she tells us that the room is not cleaned, and leave the luggage in the baggage. As we had to kill time, we went for a walk around and it turns out that we were in a central street. I think it was Rothschild Boulevard, with much traffic of people, both cycling and walking and the sides full of bars and restaurants.

We let ourselves be carried away and we ended up in the auditorium and in a museum next door. We took the opportunity to take some photos, and we shot for other nearby streets, to take control of the city. We stopped at another very lively street in which we sat on a very original decorated terrace. While we were there we watched the Israeli society that fascinated us, very modern, and very open people.

After that we lose ourselves in the streets. We realize the life that Tel Aviv has, with the great offer of restaurants and pubs that it has and the modern that it is. We go to the restaurant inside a mall and we ate some pizzas (I must say that the food there is based almost all on fast food).

After paying the bill, we went to the hotel to rest, as at night we wanted to take a tour. The hostel was wonderful. We get a huge room with its own bathroom, kitchen, large bed and sofa bed, with exquisite decoration and visible cleaning. The wifi worked perfectly and there were several towels.

After resting, we headed to Old Jaffa to have dinner in the old city. When we got there and given how late it was we opted for dinner. We got into a kind of square in which there were several restaurants with terraces with a slightly soulless atmosphere. It was very nice, so we stayed there for dinner.

We ordered several dishes to share typical food with some bottle of wine, and dessert. Tel Aviv is quite expensive. After dinner, we had to find some party place, which we had also stayed with two Israeli friends that I met on a trip to Thailand. So we took a taxi that took us near the apartment.

We go to a place that had a square bar in the center and there was a lot of people. We had some drinks. I must mention that Israeli women are beautiful and that the vast majority stop and talk to us. They are fervent followers of soap operas.

Then we went to another local that I liked a lot because of the different thing that was called Kuli Alma. There was a lot of line and the girls that were behind also started talking for the same reason. Once inside, the place is very alternative, with very good people, and also very communicative.

We were tired, but on the way to the apartment, I escaped to one that had quite a queue and when I entered it cost me mine. I realized that it was a very techno music venue, that did not look like the one we had in front, but it was full. We go to sleep.

We wake up at a prudent hour after having taken some coconuts, and we start to discover Old Jaffa. We walk again. The buildings are quite old, which we see in the try, very old, the roads and sidewalks are very neglected and damaged. We arrive at OLD JAFFA and we are surprised by the walk, the beach and the old area that is seen at the end.

It is beautiful with good weather, people on all sides, sunbathing, celebrating, visiting or simply culturing. We got lost in the old port that was full of restaurants, all with an exceptional look, but very expensive, which we did not care because we were on vacation. We decided to get lost enters the streets of the old city.

While we were in the streets, we went into very cool stores, with paintings, decorations and with views of the sea, all very nice. We ended up eating at the top of the old city in a restaurant with sea views, and pizza.

After finishing eating we decided to take a walk along the promenade without hurry and where it takes us. So we start walking observing the beauty of the beach and landscapes on one side and the modernist architecture of the buildings on the other. It looks like Miami and we can see that the purchasing power of the people in the area is powerful.

Every few meters there were restaurants on the beach with very nice chairs in the sand. So we decided to sit down for a snack. After watching the sunset we continue along the promenade. There are hundreds of runners, and dozens of people skateboarding. We continue with our quiet ride and we go through the hotels. After walking more than an hour we appear in an area of ​​a new port full of restaurants and shops.

Once socialized, we decided to go to eat but as it is all over since it is Sabbath, the day that no one works there. We decided to turn around and go back to the apartment, in a different area, as there was an immense discotheque that seemed like a rave full of people. It shows that Tel Aviv is running every day at all hours because the Saturday is equivalent to Sunday.

After arriving at the apartment we heard music that came from behind a dumpy door, and when we opened it. It was an outdoor patio surrounded by several buildings with a stage and a bar and a lot of people. On the first floor of those buildings was like some community balconies in which people were dancing amidst techno music. But we go back to the house as the next day we were going to Jerusalem.