Mysore is famous for its festivities. Some of the most important take place during the Mysore Dasara, the state festival of Karnataka. This festival lasts ten days. During the festivity, the city dresses in its best clothes, the palaces are illuminated, and the elephants are painted and decorated for the colorful and showy procession.

We start the day with a delicious breakfast and go out to wait for our guide to go up with him to Chamundi hill. Here is the most important temple of the city whose entrance dominates an imposing gopuram. As soon as we reached the top we were aware that it was not a normal day. Hundreds of people came and went with their offerings in their hands.

There were flea markets to find all kinds of items. The atmosphere was really festive, and it was Dasara's big day. People did not work and apparently, the best way to start the day was to go up to the temple. For us, it was a job because there were really so many people queuing to access the interior of the place that we had to forget the idea of going there and move on to something else.

We returned to the car a little disappointed and went down to another important point on the mountain. We visit the great statue of Nandi, the bull vehicle of Shiva. There we went down and again we found ourselves surrounded by people with their offerings taking pictures and enjoying the festival. 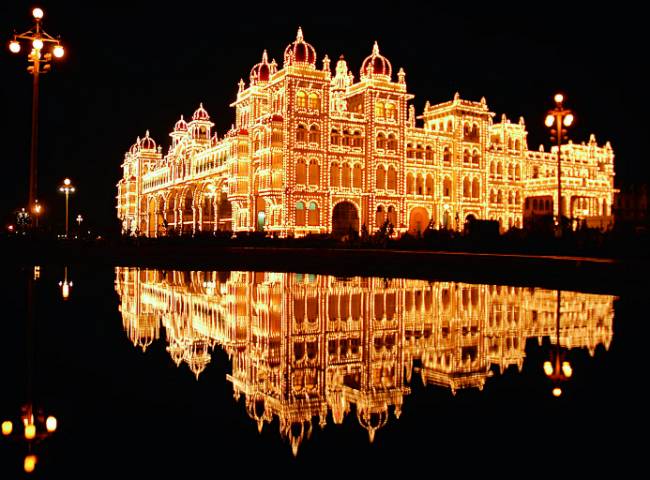 Our guide noticed my disappointed face and told me that he was going to take us to what was the palace of one of the maharanis of the city and that it was now a very nice hotel. He also told us that he had been called because of the theme of the Dasara parade and the tickets. He told us that the city would be cut off to traffic soon because the parade would leave the palace. So we could not visit it that day but then toured much of Mysore.

The option was to look for a place on the street and wait for hours until everything arrived where we were or buy those tickets that gave us the right to enter the palace gardens for 500 rupees each. We did not know if it would be expensive or not, but we had few options of things to do in the city except to go to the happy procession that upset all our plans, so at least try to see it as best as possible. We told our guide to buy the tickets.

Meanwhile, we had arrived at the grand palace of the maharani whose dome reminded us first of Notre Dame and then of the El Capitolio of Havana. We went to the bit decadent hotel. The next thing was to collect tickets for the parade and get to the palace. The streets were beginning to be cut and the traffic was tremendous.

We passed the entrances next to infinity of people. We were in the gardens, but we had no idea of what to do or where to go, so we followed the people in the direction of the majestic palace that was in front of us.

Following all those people we passed by the place where they were painted and decorated elephants and we came to a few steps full of people that as of today we still do not know how to access them. There were people everywhere without any kind of order. We tried to find a space where we could be moderately comfortable, but the sun burned and we did not want to be in a place without shade. First, we were near the main gate of the palace of Mysore and there we saw soldiers on horseback and on foot who came to parade.

The public was quite out of control and the organizers soon realized that it was going bad. People skipped fences and climbed into forbidden places. Every time we thought we'd better change our location to a somewhat quieter place. We went to one of the doors of the palace wall and looked for a shadow in which to place ourselves until something started to happen there.

It did not take long to start the party and I ended up sitting on the floor between women and children who immediately made room for me to take a picture. They did not hesitate to move and settle in another way to give me some space. And so I began to see my first Dasara parade in Mysore.

Before us elephants, soldiers, dancers, and jugglers were passing. Each group was preceded by a float and represented an Indian state. The truth is that I did not know almost anything, but everything seemed so colorful and original that I enjoyed it as if I understood what was happening in front of me. But there came a moment when the position began to be really annoying, as cramped as my legs were.


And then I saw that on the top of one of the doors of the palace wall there were a lot of TV cameras and accredited photographers who had climbed there by a flimsy bamboo ladder. I approached a policeman who was there and asked if we could go up. He, in turn, asked me to go up carefully and to stay there without bothering much.

From above I saw all the floats pass by. I saw women dancing in brightly colored costumes and I saw the elephant come out carrying on its head the image of a god. I think someone told me it was Shiva, but it could be Vishnu. I also saw the expectation that was on the street and how people had looked for the most peculiar ways of seeing the parade without missing anything.

I was up there for a long time, so much that when I went down my head hurt from the sun and one of my arms had burned. Certainly, some things have a price. But it is paid with pleasure although I would have preferred that everything would have been faster since it made me a little heavy so much float, so much musician and so much dance. 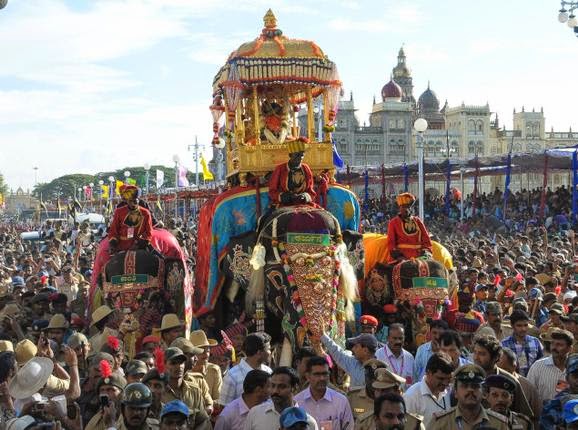 I went down from my privileged position totally exhausted, heated and thirsty. We waited for the tumult to pass and we left the palace to some place where we could have a cold beer. We soon found a hotel with a cafeteria where the air conditioning and a rich beer were enough to make us feel in heaven. We commented everything we had seen.

After recovering from the heat we went out into the street when it was already late afternoon and we walked to another of the most famous places in Mysore. The Devaraja market is a bazaar where modern India mixes in all the shops of the exterior with the most traditional India in the interior courtyard posts.

When we arrived it was almost night, but in spite of that a good number of shops were open and they were selling flowers, handicrafts, and essences. We passed enveloped by the sweet aroma of the flowers and promised to return the next day to see the place in the light of day.

We continue walking to the hotel with little desire to go out to dinner. We took advantage of the fact that the hotel restaurant was open with a rather curious buffet and after a shower, we stayed there for dinner. The truth is that the previous day was much better and also cheaper but you know, sometimes laziness can cost us a few rupees and more is done with pleasure.

We still had to go up to the room and close our bags because the next day we were leaving Mysore.