Tiruvannamalai is at the foot of Arunachala, a sacred hill dedicated to Shiva. Perched on the foothills of the mystical Annamalai Hills, the place is tranquil and a lush rich area with greenery. It is one of the largest temple in India around volcanoes. Thousands of pilgrims walk around every full moon. At the full moon in November Karthigai Deepam is celebrated as the festival of lights that still remains to be the most traditional and oldest festival celebrated across Tamil Nadu.

We wake up at 5:30. In the meantime I decided to have a South Indian breakfast of idly with spicy curries and a filter coffee. To get to Tiruvannamalai, we cross beautiful tropical landscapes, where rice fields and small villages predominate. We cross fields of sugar cane, coconut trees. Along the road there are large tamarind trees, which have small leaves a little thinner than the acacias but very thick trunks.

Their pods serve as spices. The driver offer us and we nibbled. They have a tart taste, not unpleasant. We cross dusty villages, fruit sellers, appetizing fries in tiny stalls, garages, children who go to school. The girls have their braided hair tight and wound up with big ribbons. Halfway the landscape is scattered with small hills, reddish, very dry, formed of huge piled erratic blocks.

Like old sages, gray cows with oblong heads watch with an unpolished eye the tribe of mischievous monkeys and beggars seated on the edge of the road. From time to time, the isolated statue of some deity watches absently about neighboring cultures. In this unchanging campaign with sun-drenched landscapes, I almost expect to meet the blue-skinned Krishna or the generous Lakshmi.

After several hours of driving we arrive at destination. What a shock awaits me on arrival! The streets are crowded with people, and as if restless. Thousands of cars, buses and two-wheelers converge on the city and hundreds of thousands of people disembark to honor their god. Like a human river, it flows on the circular road encircling Arunachala.

After arriving in Tiruvannamalai just minutes before reaching the temple it started to rain. It was slow at the beginning and then got stronger and stronger as we approached the temple. We end with the torrents of water that fell at the very moment when we stopped in the parking lot.

It is impossible to get out of the car and visit the temple in these conditions and impossible to predict if this rain would last a few minutes or days. We were going to give up, ready to abandon Tiruvannamalai for this time and continue our journey. But our driver, who is an eternal optimist, advised us to wait a moment. He knew how much we cared and he advised us to visit the Sri Ramana Maharshi ashram just to give the rain some time to stop.

On the way to the ashram our taxi turns into a boat. He leaves us in front of the ashram. We enter the enclosure but we realize that we have no desire to stay. We have to take off our shoes and I do not see myself walking barefoot in the muddy water of the inner courtyard, and then the ashrams. It is not really our cup of chai.

So we decide to go drink one in a small shop that is right in front of the Ashram. Our driver has disappeared. Like every time he leaves us somewhere he always finds someone to talk to or something to do. We feel good in this little shop! It's teeming with life. A young boy starts a conversation while we sip from our smoking hot cups.

The rain continues to fall. The face of our driver appears, smiling, and we follow him to return to the temple during a lull. I do not hesitate to take off this time. The temple is huge. We go under the main gopuram to find ourselves in the flooded yard. The visit promises to be unfruitful, although the temple is beautiful. It looks like many other temples of Tamil Nadu. We see puddles, tourists, and scaffolding. The sky is gray.

Intrigued we queue without thinking. We do not know where we are going but gradually we realize that we enter the cave of the temple. We move slowly. We are ecstatic at the inner pillars blackened by the smoke of candles and incense. We are invaded by the smells of incense, candles and by the sounds of bell, drums, conch. We follow the queue that advances, silently. Devotees come in honor of Shiva. The closer we come to the sanctuary, the more the temperature increases and the more the rooms become narrow.

We enter the sanctuary that is bright with sulfurous, and burning flames powered by a 30 metre high wick immersed in 2000 liters of ghee. The walls are made of black granite, which adds to the feeling of being in the heart of a volcano. The people are no longer themselves, and the smell and sounds are even more intense. An unstable wooden bridge leads to priests. The priest hums Om Namah Shivaya and we take the heat of the candle that he accompany to the face and applies the tilak and we leave room for the ones behind us.

After this time out of time we visit a little inside the temple which is huge. We see sculptured columns in aisles behind which there are dozens of lingams, statues or nandi bull aligned. Outside the temple, the show is in full swing. Along the wall on the north side, sellers of colorful sweets wait, while across the street stalls brim with statuettes and religious images.

Near the main entrance, an army of women is desperately trying to sell tiny sachets of camphor, which the faithful will throw into the fire. My eyes are attracted to a man sitting on the floor. In front of him is a stack of cards and a green parakeet in a cage. The man beckons me to approach. For a few rupees, he releases the bird which, with its beak, chooses a card and gives it to his master.

This one then undertakes to interpret the figure represented on the map supposed to reveal my future. Too bad he does not speak hindi and I do not understand a word of tamil! Suddenly, a bell rings. The priests light an immense fire to which the faithful come to purify themselves before beginning around the sacred mountain their circumambulatory pilgrimage, called pradakshina.

Soon, there are hundreds, then thousands to move forward in the streets of the city. Barefoot, they are indifferent to the state of the road, clean or dirty, paved or dusty. They left their sandals in one of the makeshift shacks scattered all over the city where, for two rupees, a guardian watches over their shoes. By what miracle it manages to return to their owners the right pair among the kaleidoscope of shoes that invade the place remains a perfect mystery.

Unperturbed, cows stand or lie in the middle of the uninterrupted stream of passers-by. At the edge of the road, the sannyasin, ascetics who have renounced the world and live on begging, stretch out an emaciated hand while a yogi is in trance. In the lotus posture, he shakes a bell, mumbling an incomprehensible mantra. All night, the procession will continue under the glow of the round moon veiled by the puja smoke.

At each temple, shrine, ritual basin or simple altar, the pilgrims mark a halt, the time of a prayer. They hope to receive the blessing of Shiva, to wash away their sins or to gain some divine grace. The devotion is total. The crowd and the powerful fervor that emanates from it, the strangeness of the situation, and perhaps also the effects of the full moon.

Here more than elsewhere, travelers must agree to forget, for a time, their comfort and their familiar landmarks, at the risk of not being able to withstand the great cultural and material differences they face. We find our driver, and give him prasadam that he happily accepts and we head to the hotel where we decided to sleep that night. Apparently there are no more rooms without air conditioning.

When the rain stops, we decide to go out for a walk in the city. We see the temple at night. The Mahadeepam, can be observed for miles around. As Karthigai Deepam is celebrated, the adjacent houses and the temple is covered by rows of oil lamps! Dipams are lit in and outside every home as auspicious symbols. They are supposed to ward off bad luck and give prosperity and joy. Then we go back to the hotel, tired after the day. 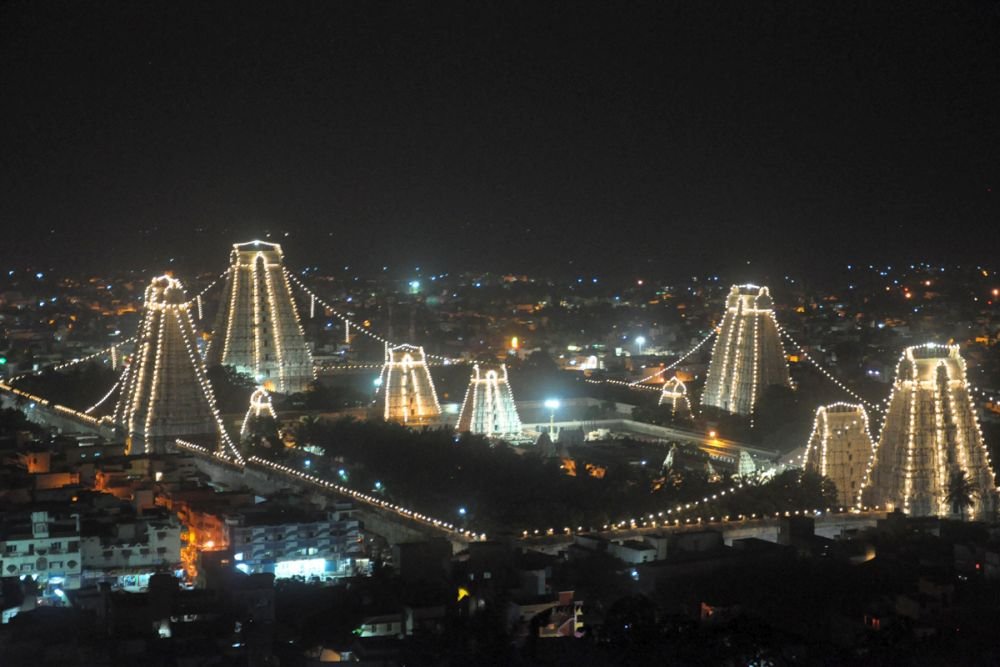 We wake up at 7 am and leave the hotel at 8 am. We begin by revisiting the temple. After an unmissable passage near the elephant to be blessed, we go inside one of the small temples. A priest calls us, seeing that we are lost and beckoning us to follow him through the dark alleys and resounding songs of meditation.

After arriving at the heart of the temple, he makes us sit in a corner in an adjacent room murmuring words we do not understand. He comes out with full hands and leads us a little further to drop flowers in our right hand and draw a line of white powder on the forehead. This small service is a rather unique experience. When we come out, we do not really know what to do with our flowers, so we put them near statues of gods.

We then come out of the temple, with the aim of climbing the sacred mountain of Shiva which is just behind the temple. We start our climb at 9:30. At the beginning of the path, we go through a part of the city a little remote. The real climb begins then but we are challenged by the fact that many tell us that it takes authorization to get on the mountain.

We do not pay too much attention to it first and we refuse to take a guide. But while continuing to climb, we are stopped by a forest ranger who refuses to pass us without authorization. After much insistence and once the tourists are gone, a little old man agrees to accompany us and we pass without problems.

We did not know that the climb would be so difficult. There is no shade at all and the sun is really hot now. Despite all the disadvantages, the view is superb and we get never tired of taking a picture. We go to the cave which is not very far. Completely exhausted, we turn back, a little disappointed not to have arrived at the top but happy to have seen the landscape.

We then return to the hotel for a shower and lunch. And here we go again to Chennai. The Tiruvannamalai Bus Stop is much more like India than the Chennai Railway Station.

Brain Games that are Vitamins for the Brain

How to Calculate Travel Expenses