Pola is a bull worshipping festival celebrated by farmers in Maharashtra, Chhattisgarh and Madhya Pradesh in the Vidarbha region. On the day of Pola festival on Pithori Amavasya in the month of Shravan that coincides in August, farmers worship their bulls, which are an integral part of the agricultural chores. From the next day plowing and sowing begins.

Though the bullock is replaced by the tractor, on the new moon day in the superstitious hinterlands, rituals dedicated to the cows and ox continue to mark the festival of Pola. The exuberant tribals in Chhattisgarh love to celebrate life and this remains incomplete without the celebrations of the Pola festival. It is a thanksgiving festival to the cattle. Children play with well-decorated clay idols of Nandi bull the vehicle of Shiva.

In the evening I land in Raipur, the capital of the state of Chhattisgarh. I choose my accommodation near the bus station, because the next morning I have to continue. Only vegetarian dishes are available, I learn in the restaurant around the corner.

Tribal Groups, Tribal Markets, Red Ants Chutney, Bastar Dussehra, Chitrakoot Falls. There were only a few lines in the travel guides when I landed in Jagdalpur in Chhattisgarh for the first time after 6 hours of journey from Raipur. The place bordering the state of Orissa, seemed a paradise for intrepid explorers. My soul of a photographer could not resist long. After checking some Indian websites, my decision was made.

I could not imagine how much I would fall in love with the tribes and people of Bastar. Jagdalpur is the capital of the Bastar region, inhabited mainly by tribal people. The tribes are the oldest indigenous peoples of India who lived here thousands of years before other peoples migrated from the north.

In Jagdalpur I felt right at home right from the time of my arrival. The city is an interesting mix of old and new. There are corners that look like a small village where cowsheds stand next to small huts. Then there are streets in which smartphone shops alternate with jeans shops.

Above all, there is a fairly relaxed mood and unlike other places, garbage is swept from the roadside every now and then, so that no masses of it accumulate like elsewhere in India. We take advantage of the place to discover the village market. Sundays are hectic as from the surrounding villages people come to the Haat. This is the name of the trading place on the grounds of Sanjay Market.

The running cows are quickly shown their limits here. Even objects fly ever after the sacred animals, which are obviously not so untouchable. I combined my visit to the Chitrakot Waterfall with the beautiful tribal Lohandiguda Market. I could easily find a shared jeep to visit the market, then another for the India's widest waterfall and also called small Niagara Falls because of their horseshoe shape similar to the most famous American waterfall. Some locals would like to share a photo with me. I'm surprised.

Actually, I was the one who wanted to snap the women in their colorful saris in front of the waterfall, but now I am myself part of the motif. Also striking is the preference for selfies, not unusual in itself. The fact that even cows can be seen at the Chitrakot waterfall, hardly surprised me. It almost seems as if the animals also wanted to pose for some snapshots.

Our next aim is to visit the Adivasi area around Jagdalpur. My local guide drives me by motorbike to the villages of the indigenous people. The families lives from the dokra and terracotta arts and crafts that are sold on the regular tribal markets. I quickly realized that I had arrived in a completely different world. We get into a festive celebration called Pola.

The festival is going on for three days. I had expected only a small number of people, so I was quite surprised that thousands of people from the surrounding villages had come together. The festival included an Adivasi Haat, a tribal market. Bulls were decorated with different colours and ornaments.

The most impressive thing I found was the ritual of the medicine men. They first gathered in a square where they sat down on the floor and fell into a trance accompanied by drum music. Then they began to shake, jumped up and fell around each other's necks. Allegedly, all this happened without supporting substances, only through the music.

After a while, they rose and traveled through the village with all sorts of religious equipment. In between, they stopped repeatedly and danced or performed rituals that I did not understand so well. When they reached the market again, they were surrounded by people who promised to cure illness and touch their feet. I met very nice locals here. One invites me to a have a rice flour pancake.

I tried chapura both to describe the species of red ants that tribes eat but also the chapura chutney they prepare with these ants. The taste was both sour and sweet like tamarind, but quickly became bitter. My horrible grimace made the tribal women laugh around me!

Very near was the few Adivasi people selling palm juice or salphi beer. I tried one or two sips, which for reasons of convenience were served in a rolled-up tray instead of a glass. In the rest of the market mainly vegetables were sold, which was grown in the fields of the surrounding villages. However, the largest crowd gathered around the cockfighting arena. After seeing the first rooster game, it was enough for me and we drove back to Jagdalpur.

The festival was definitely a unique experience, completely off the beaten track and something not so easy to find in the guidebook. On the way back my guide told me that three Adivasi ladies had approached him on the market and that I should stay in their house. Damn, why did he tell me that afterwards?

In the evening a celebration was supposed to be going on in the town hall, as I had read on a poster. I wanted to look at it and so I ended up on pretty much the strangest party ever. The DJ did not play music, but in front of him on the stage some guys were babbling something into the microphone and taking pictures of each other. When I was seen, which lasted only a few seconds, I was taken high on the stage, as any contradiction was pointless.

Now I was briefly interviewed. Suddenly, hands stretched out from the edge of the stage, which wanted to be shaken by me. Then people came to me from all sides with cell phones or cameras and tore themselves to be photographed with me. At some point I managed to escape from the center of the action to the edge of the stage. Then the DJ finally started the music.

Shortly thereafter, when I ventured out onto the dance floor for a minute, I was again surrounded by a pack that tore itself away to dance with me. For me it was definitely stress rather than pleasure and I had to worry about getting hurt in the scramble.

My guide brings the Mahua, the intoxicating drink made of fermented flowers. I try that, of course. I refuse only the invitation to participate in the dance, which was rather an attempt to tug me gently into their midst. Around midnight I started the retreat to the hotel. 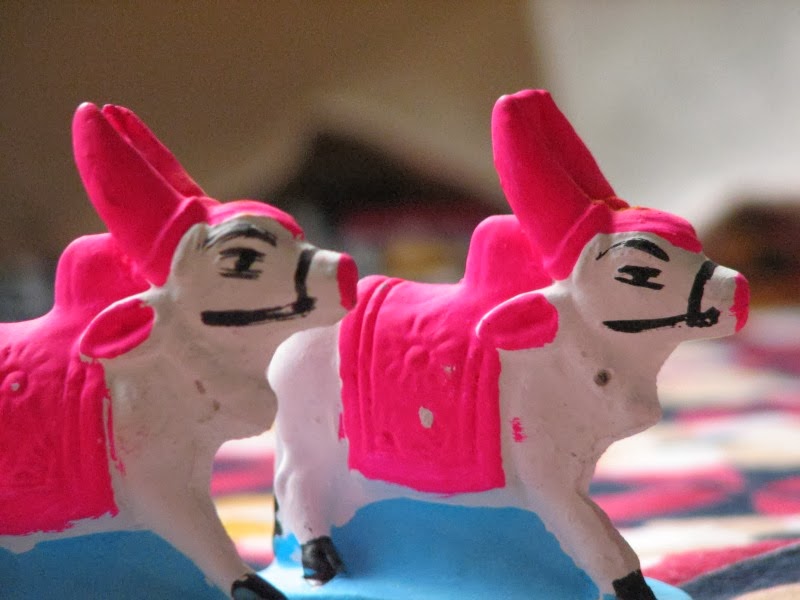 I woke up in the morning greeted by the eight chicks that slipped fresh from their egg shells at that moment. I find myself in this corner of the country as in another space and time, where people in the countryside live to the rhythm of the sun. The unexpected twists are somehow the salt in the soup while traveling.

The day before yesterday I wanted to take the train from Jagdalpur to Kolkata. But the shortest route through the interior of the country was booked out for the next few days. So I decided without further ado to take a detour and make a stopover in Dantewada. Although I find a bus to Dantewada, I prefer to go with a local as Dantewada is less explored than Bastar.

The main attraction of Dantewada is the Danteshwari Temple. The Dussehra of Bastar has nothing to do with Ramayana and draws its roots and originality from the tribal culture of Chhattisgarh. Here the tribes honor the Devi Danteshwari, the native goddess of the Bastar region and tutelary goddess of the kakatiya kings dynasty. I even had the extraordinary privilege and honor to sit near the Goddess where only the royal family and priests are normally permitted.

Dussehra, in Bastar, begins with the ritual of Paath Jatra on the day of Hariyali Amavasya (Amoos Teehaar in the local language) and celebrates the arrival of the monsoon. During this ritual, a trunk of salt, one of the most used lumber in India, is cut in the forests of Bhilori and brought before the temple of the goddess Danteshwari. Several rituals are then performed on the trunk including goat sacrifices.

This trunk ceremony not only inaugurates the festival but will also be used to manufacture some wooden tools for the construction of the large tank that will walk the last two days of the festival. The ceremony of Kachan Gadi is considered to be a symbolic authorization of the deities to begin the festival. This blessing is made through a girl from the tribe of Mirgin-Mahara who enters a trance on a swing made of wood and brambles.

At the Bheetar Raini, during Bastar Dussehra, the Goddess leaves the temple to join her twin sister in Jagdalpur in a procession led by people of Bison Horn Maria tribe. They dance and go into a trance with the help of mahua or silpi, the local beers. The tribes who gather at the Danteshwari Temple in Jagdalpur bring with them their local deities called Anga Deo.