Today we are going to share a very memorable day for us in one of the most beautiful and special corners of the world. We decided to go on a trip along the Li River in Guangxi in China. If it was not for the adventure we lived, we enjoyed the plans that were unexpectedly emerging. It's one of the good things about traveling solo. 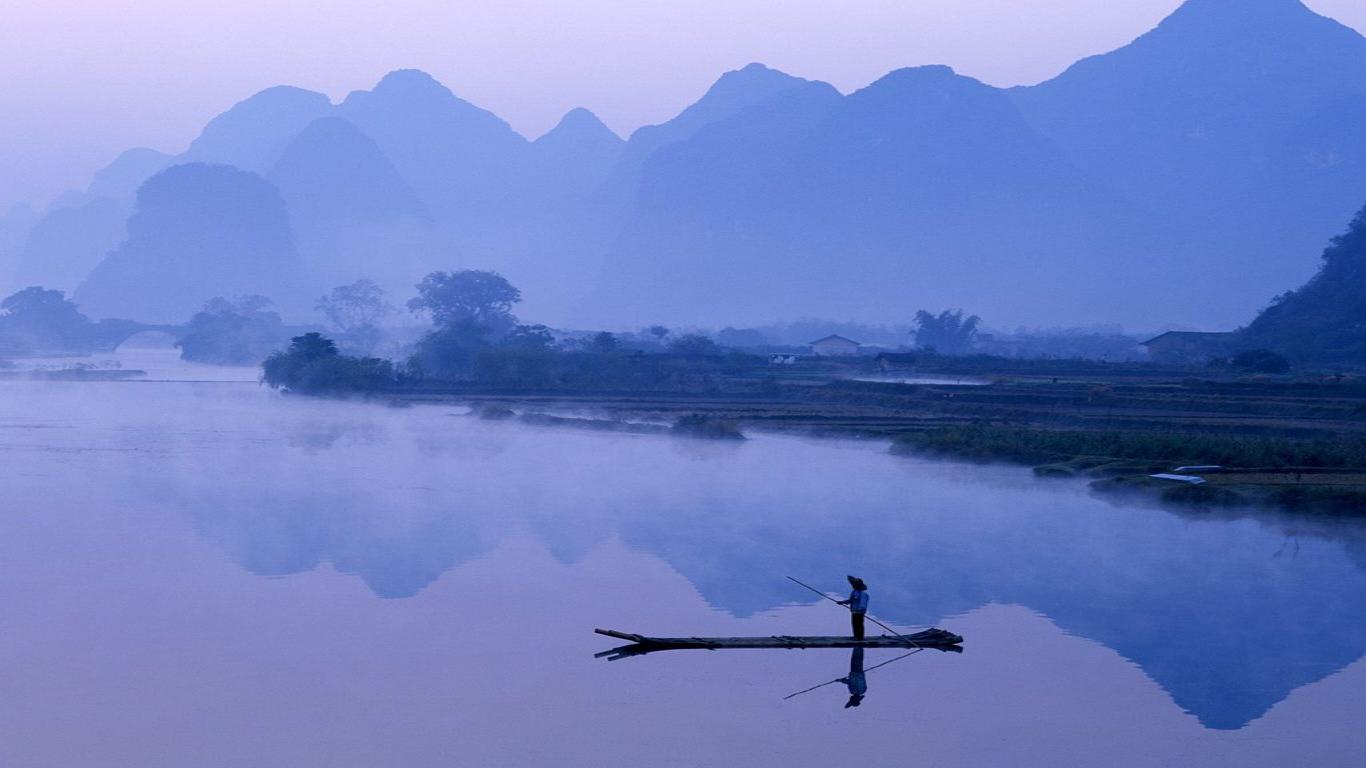 One day during our trip to China we were in Guilin when, early in the morning, we decided to go on a trip along the Li river. Through the hotel, we hired a boatman who would take us from the area of ​​Yangdi to Xingping. We told them that we would leave our bags there and we would return the next day, to keep the room (which was really cool).

They took us by car to the shore and there a private bamboo boat wait for us to sail the waters of the beautiful river surrounded by its karst mountains! It was about an hour and a half walk. The day was clear and sunny, with what looked like the reflection of the mountains on the river.

Guilin is a mountainous area located in southeast China. It is a very touristy area where many of the locals come to spend their vacations. The landscape is spectacular, almost indescribable, with which it will be better to observe it for yourselves.

The river went down very little since the rainy season had passed and the boatman even let us drive. The truth is that it was a fun experience but above all very romantic. We never tire of seeing the mountains surrounding us. We see the people on the shore washing clothes, fishing, and children playing.

We got off in the Xinping area and took the most famous photo of the area, the image used in the yuan notes. Xinping is a very traditional little town where the tourists hardly stay to sleep. We went for a walk through the town and stopped to eat at a guesthouse, where they made the best stone baked pizza we have ever eaten!

After the binge we went out to the street and suddenly we found a sign that said viewing platform. We certainly knew from reading on travel blogs that there was a sign that invited you to go to a place and that the views were incredible. So we did not even think about it and we went crazy to climb the mountain.

We still did not know what awaited us. There are 1159 steps on the stone! In total, it took us about 45 minutes to reach the top. When we reached the top, we could hardly believe it but, as the signage said, the effort was totally worth it.

Once up, we met several tourists who were watching the views. The most amazing thing of all was, to meet there, the man of Japanese origin who along with his crew of nine bricklayers built the stairs. It turns out that the man, upon discovering that, decided to build a hostel down in the village and give his guests with such a wonderful experience. We even took the photo with him as a souvenir.

After going down we went to the bus zone to take one that went to Yangshuo, which is where we were going to stay. That was an odyssey, full of minibuses that went to areas written in Chinese calligraphy. As we did not even know what the destination of each was, so we had no choice but to search among all little signs that looked like the drawing we had on our map.

Bingo! After a search, we find it. We got on the bus and as there were few seats. There were stools where people sat down to fill the minibus. I remember that a man got up, bald with a tagline and a long pointed beard taken out of a Kung Fu movie with a pint of beer. After taking a second minibus, we arrived at our destination in the outskirts of Yangshuo.

Before we go to the hotel, I took the opportunity to take some pictures at sunset. I had not even noticed but in the undergrowth there were tombs of an improvised Chinese cemetery. There I understood, because some workers who were working the field did not stop looking at me.

We went to the hotel to rest, being the only guests of the hotel, from where we enjoyed the tranquility and the views of the mountains from our room. 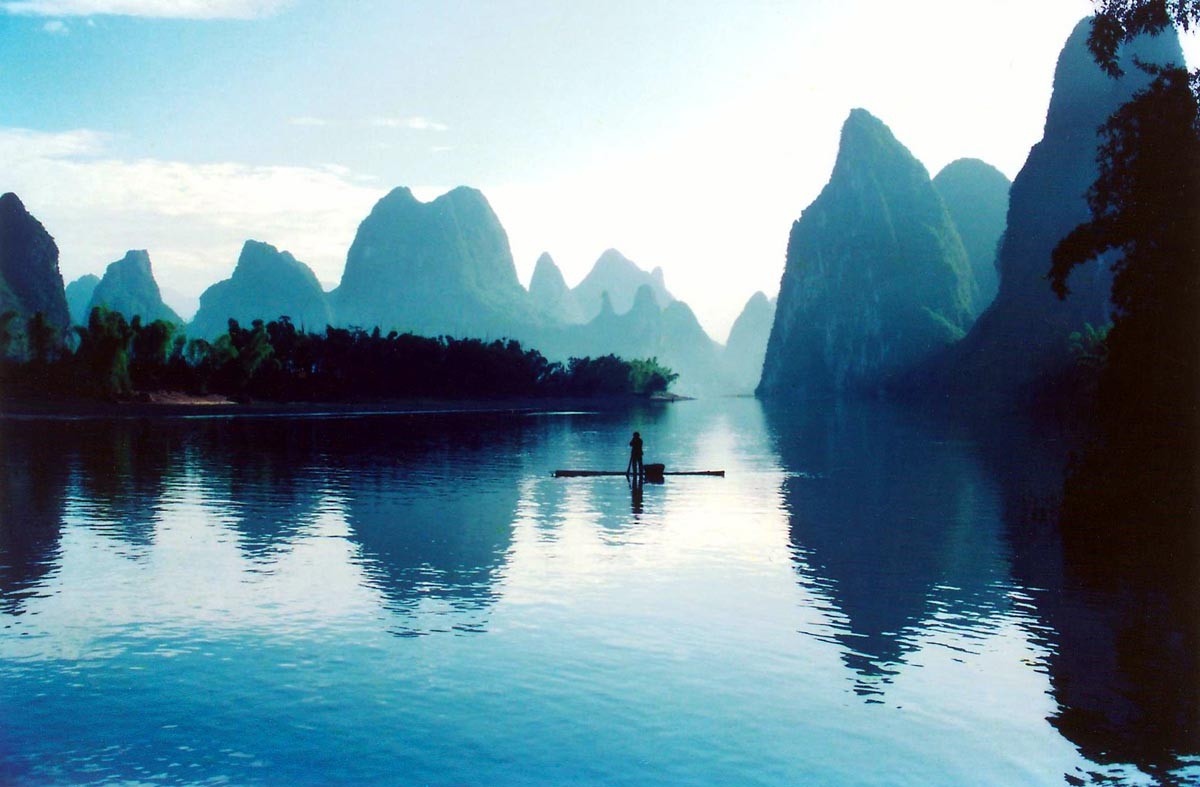 In the morning with charged batteries we rented bikes in the hotel. We went with a map to travel the area, looking for the Moonhill, Banyan tree and some curious town that we were searching. Nobody had explained to us that Moonhill was a simple hole in the mountain. When we found it we started taking photos.

A group of Chinese students came and started to take pictures like crazy. We planted some wreaths on the head. They were so freaked out that we thought they even wanted to eat us! It is that they only wanted to become our friends.

After taking the book we were offered to go with them, they went on a trip, but it gave us a bit of cut and we said we had to continue with the bikes. We said goodbye to them and everyone went by their side. After half an hour we found them again, when we were asking for a price to enter the Water Cave.

A dilapidated bus that moved more than anything, took us to the entrance of the cave about 15 minutes. The excursion began. The first step was to take of my shirt and put on some rusty flip flops and enter the cave by boat through that little hole. Once inside we did an hour of caving, walking among the stalactites and climbing the walls.

We were delighted. Everyone was talking to us. Their English was not very good. We arrived at the area of ​​the mud baths and in some improvised changing rooms we changed to put on the swimsuits. We leave our things lying around near the pond and to bathe in the mud!

It was great fun. They started to get confidence right away and we started doing a mud war. We showered in a stream of freezing cold water and we walked again through the cave to the hot springs area! It was like an egg cup, with small natural hot water pools each at a different temperature. There we also began to play, passing from one to the other.

We left the cave all together very happy and while we got on the bus some went to steal oranges from an orchard. The owner caught them and came to give us a fight to all. Before taking our bike we took a group photo and we said goodbye with a smile of complicity for the good time we had spent together.

During the rest of the day, we spent in Yangshuo, until we caught the bus that would take us to Guilin again. We were in a cloud remembering the great experience we had experienced from the moment.