Today the day has started cloudy and we are in the middle of the mountain. Here the temperature has cooled and the sweater is most essential. In Banff a cable car takes us to the top of Mount Sulfur and from there we walk along a wooden walkway that takes us to the weather station of the Samson peak. The clouds do not let us see the landscape in all its splendor that on clear days must be magnificent.

We see some marmot and we are followed by very gluttonous squirrels that approach with brazenness to ask for nuts that the children are giving them. They fight among themselves, they climb on top of us and they even try to sneak inside the backpack and it's just that they just needed to talk. It's been a lot of fun.

We learn that they are not really squirrels. They are called Spermophilus and they are the same as disney, with white and brown stripes on the sides and shorter tail than common squirrels. The children want to take them as pets. We only needed the squirrels inside the truck.

We leave Banff town and drive in the direction of Lake Louise, along the panoramic road of the Bow River. Our stop is in the Johnston Canyon where we take the trail that takes us to the waterfalls of the same name.

We walked 30 minutes and we reached the Lower Falls, traveling 1 km along a path that borders the river and along some footbridges that save some obstacles. The landscape is spectacular but this first section is full of people. The waterfall is small but the relief and color of the water is unique.

The second section to the Upper falls, is not as busy as there is more unevenness. We arrived after an hour of road, also between slopes and footbridges on the rocks. These are just as narrow as their sister the lower but the fascinating thing is the forest, the stretches of the trail and the wear of the rocks that form the canyon.

We regain our strength and retrace our steps to the parking lot to pick up the truck and head towards Lake Louise. Lake Louise is the most famous glacier lake in the Rocky Mountains of Canada. Its name is due to Princess Louise Caroline Alberta, daughter of Queen Victoria, and is located 1,730 meters above sea level.

Lake Louise is like the Emerald Lake but what I do not like is the hotel that is built on the shore. It is the famous Fairview hotel actually built to finance the railway works. And I have not told you about the transcanadian railway line but it is something worthy of praise. They cross the rocky mountains and the goods trains are very long.

We have tried to count the wagons they carry but we lose track of them. I would say that some can reach a kilometer long. Well, I continue to Lake Louise. Today we only have time to take the route that takes us to the belvedere or behold, on the west side of the lake. The path is pretty steep and somewhat lonely by the hour.

So we started to climb, that with the commotion that we mounted I doubt very much that some bear decides to appear, rather take the opposite way. The only thing we see apart from the views, is a busy woodpecker in a pine tree, chopping and cutting the bark.

After the visit of Lake Louise, whose main treks we leave to dedicate tomorrow, we take the road that leads to Lake Morraine, another beauty, surrounded by the famous ten peaks. Here we take a path that takes us to the top of a part of the lake. From there there are other treks like the one that leads to the Consolation lake or the Eiffel but given the time it was and it starts to drizzle, we let it be. So much cannot be covered in a day.

Here we begin to see the signage that recommends not to make the treks alone if not in groups of more than four, due to the presence of bears in the area. Thus there is less probability of being surprised by the bears.

At the entrance of our campsite they give us the instructions to follow so as not to attract the attention of the bears. It is not to leave food or leftovers outside the caravans and use the garbage with special lids. And it is that the campsites are in full nature, and they are very large and with basic facilities.

We have also seen that the area of ​​the town is with electrified cables to deter wild animals because not only are the bears, there also roam cougars and wolves. Well with so much wildlife here (thank goodness that thanks to the cold here there are less mosquitoes) we go to sleep. 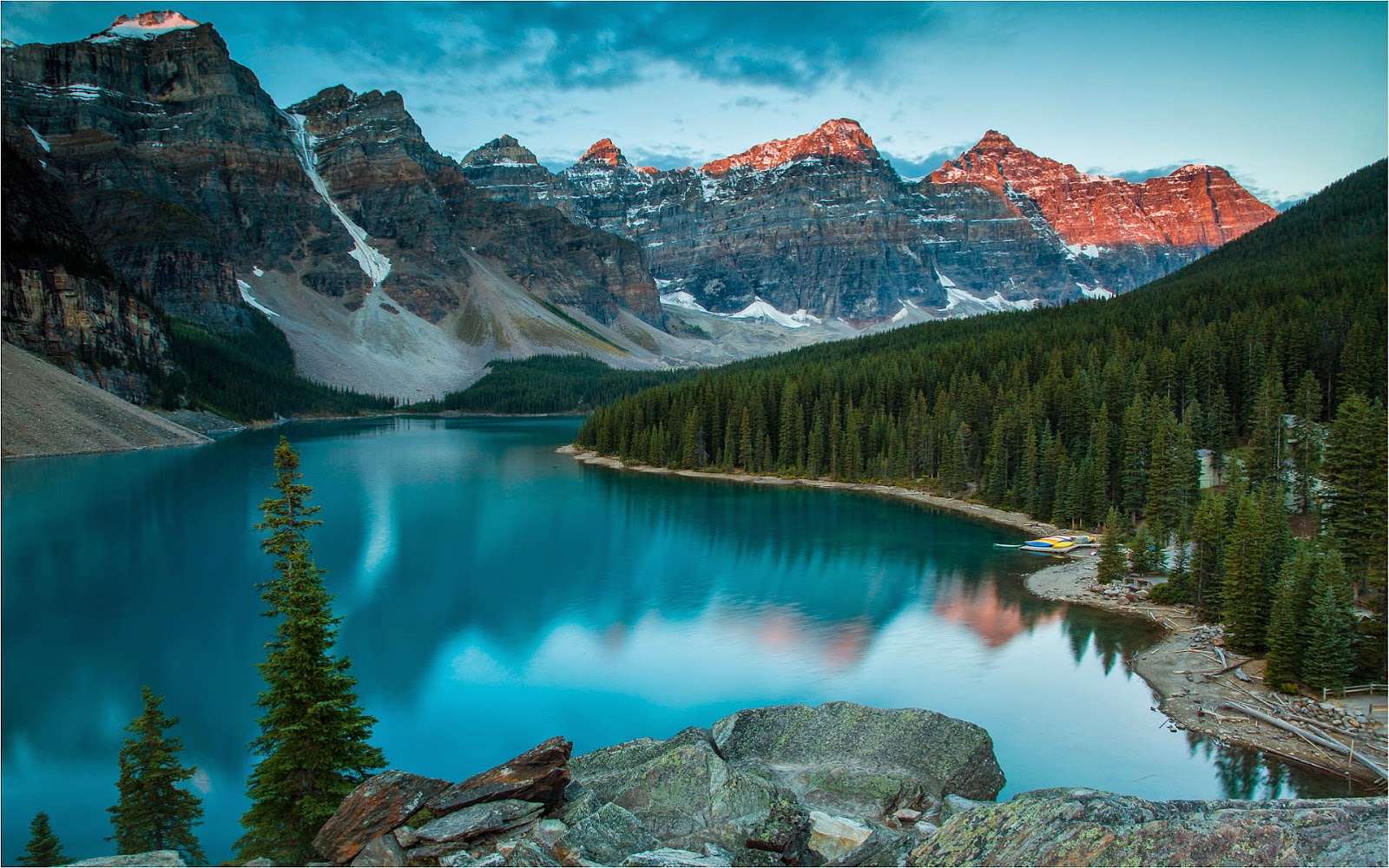 We had a good breakfast. We loaded the backpacks with sandwiches, cereal bars, nuts, water, the best way to recharge batteries. We wear warm clothes because it has been raining tonight too and it is cool and we wear the raincoats. The forecast is rain but it seems that it will clear during the day, although on the mountain everything changes in a moment.

We go to Lake Louise with the truck and we arrive at rush hour, when the flocks of Japanese tourists, Americans, and Indians arrive in the bus. But the landscape is worth it. The waters of the lake are a creamy green-blue, just like the Emerald Lake (Yoho) and the Moraine (Banff) all of the glaciers of the rocky ones.

The water coming from the thaw descends to the lake dragging sediments from the rocks, what they call the glacier's flour. It is these sediments that give the peculiar color of the lakes. At the bottom of the lake rises majestically the glacier that feeds Lake Louise. It is the Victoria Glacier.

We skirt the lake along the promenade and we take the path that leads to the first section of the trail, to the shelter or tea house. Here there is less public because the trail is not founded as the walk. There are easy pieces and others more steep. We go up and the landscape is getting more arid, but the views are fantastic.

After two hours of walking, we arrive at the plain of six glaciers (we count them and yes there are six but only two have snow). We sit in the tea house and it seems that we are in the alps. It is like a small Swiss chalet where they serve coffee, tea and some snacks. We took a deserved chocolate and we took strength for the final pull.

We continue along narrower trails to the foot of the Victoria Glacier, walk along one of the ridges and reach our goal. Some stones are detached and it is even dangerous but it has been worth the effort comes accompanied by the final reward. We see the perfect circle of the glacier and the snow that has accumulated for centuries, and those colors that go from white to blue.

It is a pity that the clouds do not allow us to appreciate it in all its amplitude. We eat something settled on the rocks and as it starts to drizzle we start to go down and deviate by the trail to Lake Agnes. We see exceptional views and a final stairs that discourage anyone to the lake that is not as beautiful as the others.

The rain is following us, so we went down to get to Lake Mirror and at 5:30 in the afternoon we returned to our starting point Lake Louise. Back at the campsite we stopped at the small Village of Lake Louise and refueled some fruit and milk. There is not much else either. At 9:00 pm everyone goes to sleep. Tomorrow it's time to go until Jasper. 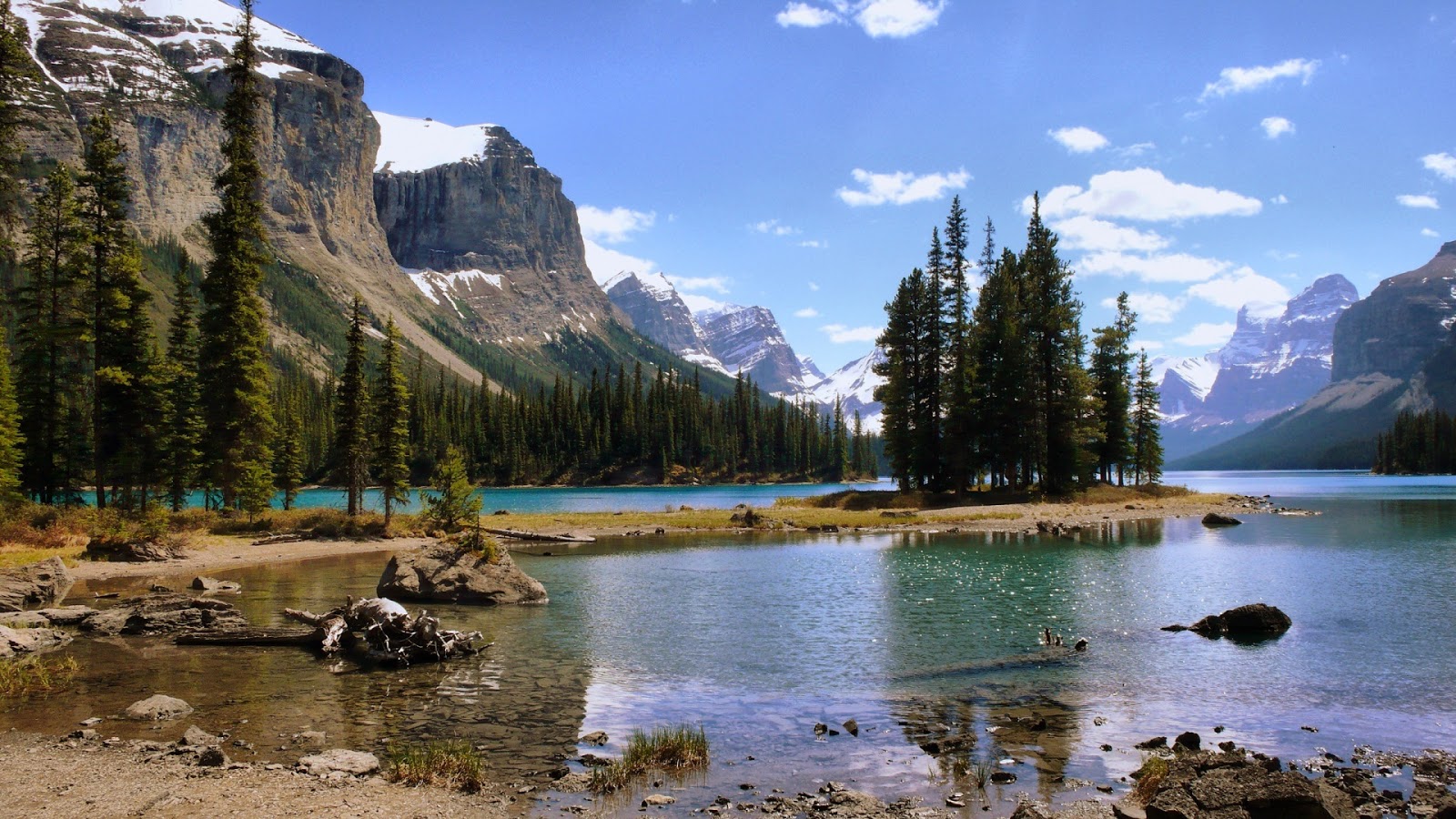