In this blog I intend to tell in a more or less precise and enjoyable way, the experience of our trip to the Amalfi Coast. We take a flight to Rome. The flight arrived promptly at 3.30 pm at Ciampino and the bus departed promptly at 4.30 pm on the way to Termini.

We arrived in 40 minutes and once there we took the first train to Naples, at 5:45 pm. In about two hours we got to Naples (Piazza Garibaldi). Our hotel in Naples was right next to the Naples train station in Piazza Garibaldi. The hotel, had spacious rooms, as well as the bathroom.

Well, once in the hotel, we left the things and we got ready to have dinner. We head to a restaurant in the Piazza Garibaldi. We tried a few linguine frutti di mare, chicken wings and a pizza. It would not be the only dinner on the site. One of the waiters, a big man with a mustache talk with us for a long time.

At 9:00 pm we went for a walk along Corso Umberto I Avenue. The streets are full of papers, bottles and crap. After about a 15 minute walk, and being full and without a soul in the street we thought about turning around because that did not look very good. But we decided to continue, and in that we started to hear trumpets and sirens.

There were a group of people, and taxi drivers in their taxis, watching a television screen in a bank window. And of course there we understood everything. It was Saturday and a football match was going on between Juventus and Napoli and to top Napoli was winning. In the end you can imagine what that became.

Bikes and cars began to appear everywhere, and the Corso Umberto I avenue became a circuit of motorcycles and cars. People overtake on either side, and of course no one wore a helmet. Well that was beginning to look like a normal city on a Saturday night. Well, we got to the Castel Nuovo. We take a couple of photos and get back to the hotel at 12. 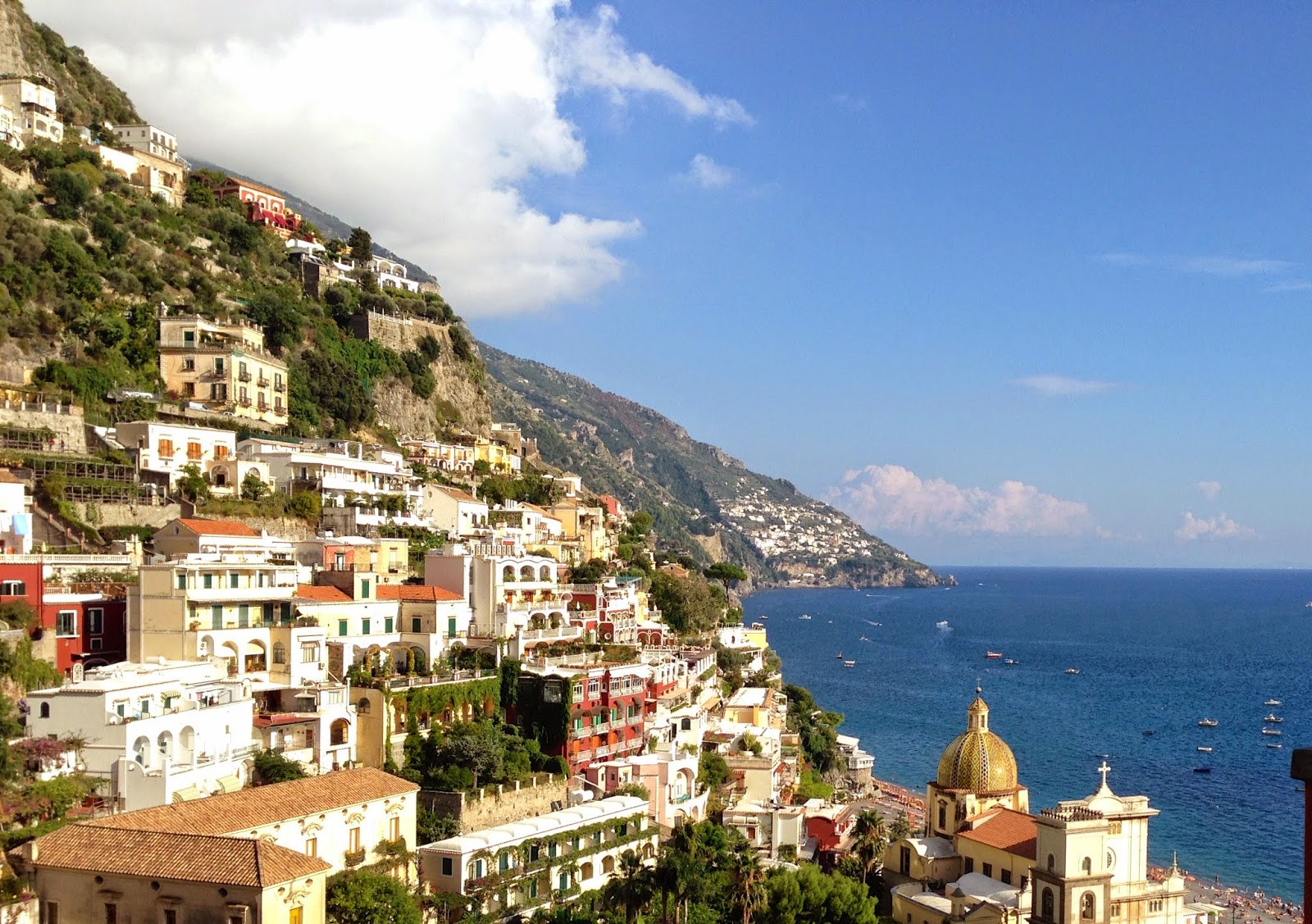 This day, of course, we got up early in the morning. At 8 in the morning after breakfast we were already at the bus stop to go to the Amalfi Coast. The day before we had asked the bus drivers where the buses for that part of Campania can be taken. The stop for Amalfi and Positano is located just below the hotel, which is on one side of the train station.

We arrive at the stop and see the schedules. According to the signboard the Amalfi bus left at 8:55. We approached in front of the hotel to buy bus tickets to Amalfi and asked what time the bus goes to Amalfi. He tells us that at 9.55. The bus came at 9.30. We ride on it. Only another couple of Germans was going. We do not validate a ticket or anything.

After an hour or so we arrived in Sorrento and there it was where it was filled to the brim with tourists who were staying in this town and continued on the way to Positano. We eat something fast and we go through what they call one of the most beautiful roads in Italy, the SS 163 or the Amalfi Coast road.

This road is an idyllic coast road of about 100 kms, passing through beautiful villages and surrounding the entire tip that goes from Torre Annunziata to Salerno, passing through well-known towns such as Sorrento, Positano or Amalfi. The SS 163 is a road that gives panic with curves, cliffs, tunnels but what to say about the views.

At the end and after traveling just over 45 km in 2 hours in crossing Sorrento and reaching Positano, two hours are spent. In Positano the bus makes several stops. We got off at the second and so we take a few pictures from the top of the town, and then down stairs we reached the beach area. For me Positano is one of the most beautiful places. It is true that we only visited Positano, Amalfi and Ravello. From any side come some wonderful photos.

We took a walk through the village and after a short time, we went to Piazza Mullin or something like that. We continue to the Amalfi Coast. From Positano we took the bus at 13.00 to Amalfi. It takes about 40 minutes to travel the 18 km that separate both towns. Amalfi is completely different from Positano. Its most interesting part is evidently the Duomo, hidden between houses and that appears suddenly, majestically in the center of the town. From the area of ​​the pier there are some beautiful views of the whole town.

We took the opportunity to eat something there and then we took another bus to Ravello. It is located 5 km away from Amalfi on top of a mountain. There is a bus every half hour. Ravello, thanks to its location in the hills is known for its fantastic views as well as for its spectacular parks and its elegance, but above all, for its views over the Gulf of Salerno. The visit was short because we wanted to take the bus back from Amalfi to Naples at 5:00 pm. After about two and a half hours we get back to Naples again. This time we took advantage of to have dinner soon and to walk a bit around the downtown area.