From the windows of the train, we can see the landscape changing when arriving near Bengal. The vegetation becomes much more tropical. We see rice fields, banana trees, palm trees and the climate is much warmer than in Varanasi from where we arrive.

The train arrives at the Howrah station at 9 pm. The train station of Howrah, the largest in Asia looks pretty, clean and not too crowded. We find the prepaid taxi stand in front of the station. We buy a ticket at the counter and take the taxi indicated in the queue. In Calcutta, taxis are beautiful yellow cars, often Ambassador, carefully bred.

There are many and they are not expensive. On the other hand, the drivers do not always know the place where we want to go. We cross Howrah Bridge and we arrive in the busy little streets where is the hotel. The reception and the lobby is quite classy, and there is even a lift! On the other hand, the room is in a sorry state strewn with detritus.

The air-conditioning flees on the ground, and everything seems abandoned and it is a pity because it could be done better. It is large and very clear with its two large windows, a sofa, a large bathroom and is located on the top floor overlooking a quiet street. They assure us that they will clean! Finally, after the household has been nearly done, we settle down.

The walls and the furniture would need a good leaching, but we will be fine there. We have dinner at a local restaurant. There is no menu but plenty of dishes are brought like rice, dal, vegetables, very spicy shrimps, red spinach curry. In the neighborhood is Sudder Street, the street of backpackers and the atmosphere is very nice and cosmopolitan.

At the end of the street is the beautiful white building of the Indian Museum. Opposite is the large Maidan where are full of cricket grounds, a game very popular here. In the night, the neighborhood is full of people and small street shops abound. 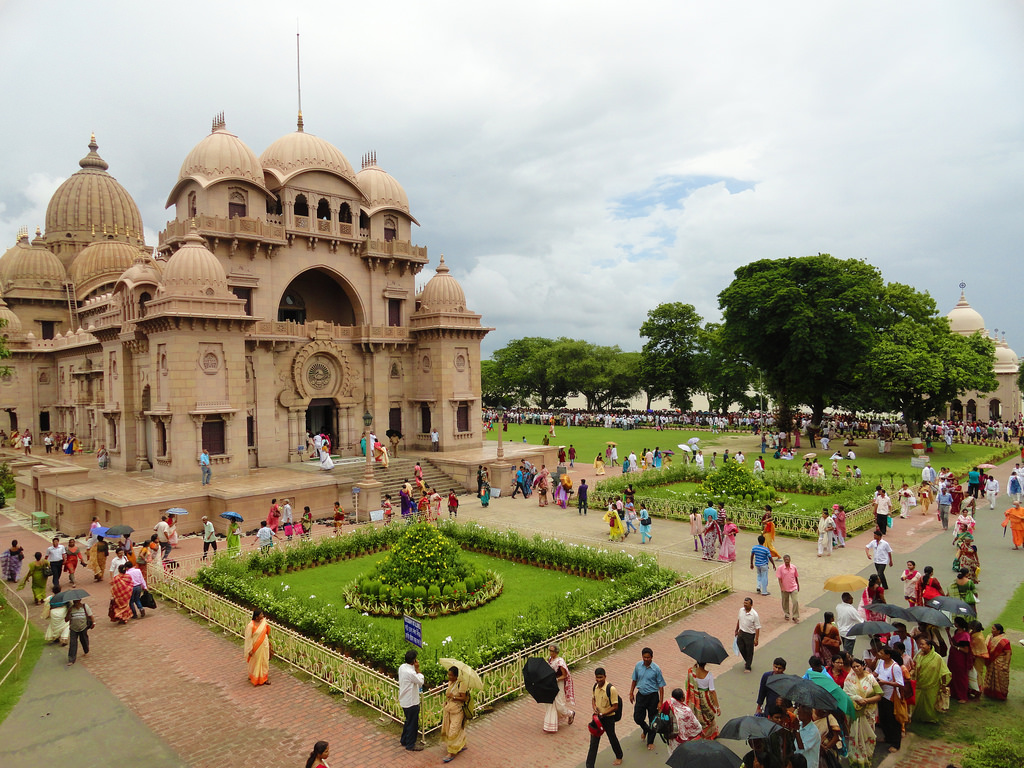 As we have a day before the departure to the Sunderbans Tiger Reserve, the travel agency offered to organize a day visit from Kolkata to Belur Math. A man wait for us at the exit of the train. We take a yellow ambassador taxi to face the traffic to a small Broadway style hotel. The room is spacious, with a sofa area.

After a shower we go with the guide and a driver. It is not very causative. He does not tell us where we are going, nor do he give us an explanation about the city, or its history. Not great as a guide, but it brings us to interesting places. We realize that he does not speak Hindi much.

On the banks of the Hooghly River in the north of the city is the Belur Math. Nestled among palm trees, flowers and manicured lawns, this vast religious center is home to the Ramakrishna Mission. The founder is the Ramakrishna Paramahamsa, a philosopher of the XIXth century, who preached for the unity of all religions.

The main temple is a huge monument mixing several styles in cupolas, cathedral shape and Indian palace. We wait inside the opening. The faithful prostrate themselves before the statue by placing flowers and money in the donation box.

Other small shrines contain other statues or idols. A museum traces the life of Ramakrishna and his disciples. We meet one of their gurus. Through the streets there are many shops of religious objects, and dozens of photos of all sizes and colors stand out with Vivekananda, in different poses and costumes, as if he were a film artist. A little further up the opposite bank is the Dakshineswar Kali Temple a long striped yellow and red building, with many pointed roofs. It can be seen from the river. Ghats go down there, where pilgrims bathe. This is the place where Ramakrishna began his spiritual journey.

On our way back to Calcutta we stop at Kumartuli. The place owes its name to the sculptors of effigies of idols like Durga, Lakshmi, Saraswati and many others. The sculptors are always busy as the idols are ritually immersed in the sacred waters of the Hooghly on the occasion of religious festivals. They make idols of all sizes from the smallest to the giant ones before Durga Puja.

The first step is to make a straw structure. Then they cover it with clay. After drying, effigies are painted and customized with wigs, jewelry. We come back to Chowringhee. The Victoria memorial evokes a pantheon, between the white house and the Taj Mahal. Built in honor of Queen Victoria's 60th birthday, it was completed only after her death.

We enter the park between two stone lions. In front of the main alley, the queen looks a little absent, on her bronze throne. Behind it is the imposing white marble edifice with its cupolas and columns.

A statue of Victoria, much more majestic is under the big dome. Inside there is a gallery of paintings, one of photographs of the governor's house. The Calcutta gallery is the most interesting. It traces the history of the city, from the first inhabitants to independence, through colonization. The only problem is that everything is in English and there is far too much text.

At the back, the memorial is reflected in basins. After a ride in a carriage, the lovers find themselves on the lawns in the middle of the detritus. The park is pretty and well maintained. It is a pity looking at the lack of civility of some.

Not far away, the Birla Planetarium is one of the largest in the world. Sitting comfortably in chairs as in the cinema, we admire the projection of the starry sky under the dome.