I arrived after an hour ride. It is a little less warm thanks to the rain. Once settled in the hotel, I aimed at the College Street area, a little over a kilometer away. I then head to College Street, where the reputed universities and colleges are. There is the famous Indian Coffee House, in an old building like any other, with the highest ceilings I have ever seen. It is overflowing with people, and it is more difficult to find a free table than a needle in a haystack. Here meets writers, artists, thinkers, to chat in an endless adda and that's why it is impossible to find a table. After around 15 mins, we found a mini table. After the sunset, I settled at a table in the mythical Indian Coffee House nearby, a landmark of intellectual and Bengali scholars, who spend their evening philosophizing.

It is called the anarchist cafe and is the only public place where it is still possible to smoke a cigarette. The waiters wear white uniforms and a fan-shaped turban for the best effect. Right next to me, a local settled, who quickly introduced himself. We started talking and he offered me coffee.

He says he is a journalist from a local newspaper in Calcutta. I see he knows more than me about the new wave of professionals and what is more normal about Bengali cuisine. And with my little experience, I can now also engage in comparisons. Founded in 1876 the establishment could reflect the history of the city or India. The atmosphere and furniture seem to date from the middle of the last century. Formerly, in British Raj day, the gallery was reserved for whites.

But first, what is an Indian Coffee House? What I understood from his explanations is that these were operated by workers dismissed from coffee plantations. And the status of these cafes would always be cooperative. It is a local outlet and a fallback activity for former planters. I do not know when it dates, or why these plantations stopped.

There is cheap tea or coffee, pakoda, and simple snacks. The Indian Coffee House is near the Calcutta University and served as meeting places (and political discussions) for students. I took pakoda, while my neighbor took nothing but his tea and that's how the discussion started. It's all books here, he told me. Yes, that's what I see first. And it's true that it gives the impression that everything is similar sometimes.

For him too, Bengalis cook too much fish here. Not wrong perhaps when I think about the cooking time of the fish fried that I saw prepared and eaten the day before yesterday. It destroys the nutritional properties in all these cooking, he said.

One thing led me to say that I was impressed that all I speak with are very familiar with the nutritional or therapeutic properties of the ingredients used. According to the Ayurvedic philosophy, the food here is not there for the pleasure of the palate but that one eats for the benefits that these ingredients will have on the health.

And, it brings me to the reflection that if you eat for your health first and not for the pleasure of taste, it is normal that the shared meal is not an indispensable thing! He tells me that in Calcutta, we will almost always mix rice with a little ghee, because it will facilitate digestion. Mustard oil is good for digestion, and for the brain.

Even if the Bangali are very chauvinistic, I agree on his reflections. I had the impression of greater diversity and more attention in the kitchen at Puri than here, where it seemed to me that some preparations were more approximate. We talked about the classic meal in Calcutta.

Bengalis cook mostly masoor dal that people pour on rice, and moong dal on the days that are a little more sacred. Then they will have at least one sauteed vegetable and a vegetable curry. And to show respect to host, people often prepare a dish of biri dal, shrimps and coriander leaves. I would really like to stay with a local in a house in Calcutta!

Unfortunately I do not have any decent photo of the place. I'll have to go back to get a good one.

We order coffee and onion pakora. Despite the problem of the tables, and waiters who ignore us and take a thousand years to bring a coffee, it is a place that I love. We lost the last tram to Esplanade, by pure bad luck. So we got back on a bus.

And coming out of there, I had already eaten a little, but I was hungry again, and so I go to a local snack vendor. I buy aloo chop with cauliflower florets coated with chili and fried. I continue my tour of Bengali gastronomy with Kati Roll. It's ready to eat on the street. After a small beer, I return amidst a downpour! Soaked to the bones, my body remembers the sensation of the cold, to my greatest pleasure. 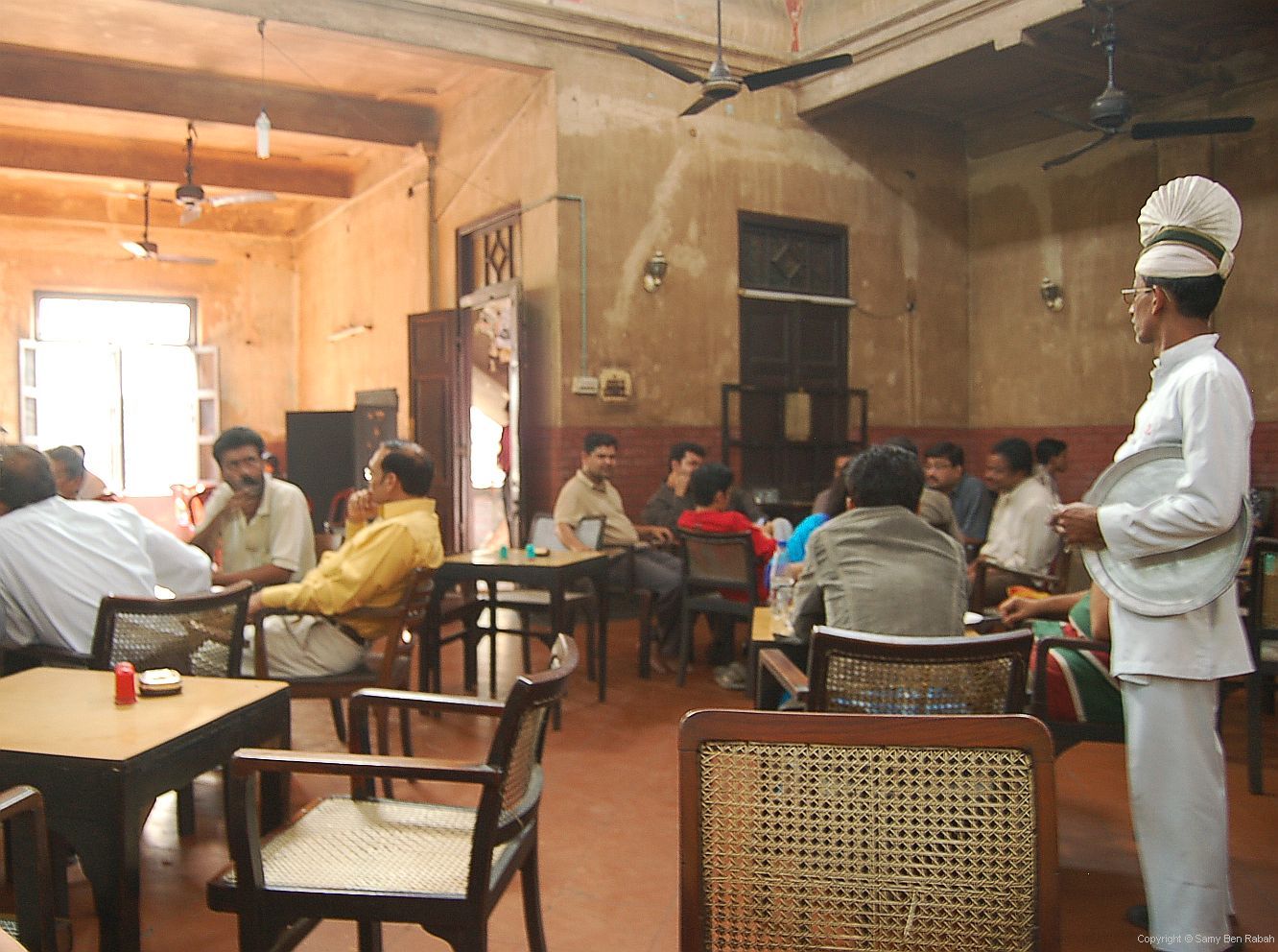