As I sit down to eat the vegetable-filled khichdi (a well-digestible rice and lentil porridge), I sigh happily watching the steam rising from my plate. It's a cold November day. I'm sitting in front of my porridge-filled bowl, feeling the warmth of food as it spreads throughout my body. Normally, when I am as hungry as I am today, I really get down to eating in the religious places sharing community meals.

But this time it is different. A sense of fullness captures me at the mere sight of the colors and the seductive fragrance. The water runs in my mouth as I watch the ghee (clarified butter) slowly moving on the hot food. At that moment, I wish everyone loved Khichdi as much as I did and did not associate it with anything.

Khichdi is my favorite for hearty food. I firmly believe that it is the ingredient of love that makes it so tasty. The art of loving food and preparing food with love is for me the essence of healthy nutrition. For me, the conscious application of the universal guidelines of humanity is very important when it comes to cooking and healthy eating.

At the dazzling pace of the 21st century, the essence of healthy eating seems to be falling behind, considering how much we have gulping snacks on the road, the microwave ready meals and the food while sitting on the iPhone, we have gotten used to. So, the days we sat with the family at the table, reciting a prayer and taking time to chew, are a thing of the past.

However, when we think outside the box into other cultures, we find that sitting together and eating together is like a common thread through all cultures, a thread that holds together the social fabric of a society.

Khichdi is an ancient delicious traditional dish used for thousands of years. Khichdi is also known as khichdee, khichadi, khichuri, khichari and many other variants is a dish of Indian cuisine containing a combination of rice and lentils. It is generally considered an informal dish. Khichdi is the first solid food people give their babies in India.

The rice and lentils are soaked until they lose their consistency and is seasoned with turmeric and salt. The khichdee is also the first food that is served to the sick and patients.

The Khichdi is usually served with another Indian dish called Kadhi. Other accompaniments are papads, Beguni or fried eggplants, ghee or clarified butter, achar and yogurt. Khichri is a comfort food for the people of India and those following a Saatvik diet of Ayurveda. It is considered as a nutrient rich, light and simple food and is prepared without any spices. It is widely recommended by doctors to patients, children and the elderly who are recovering from diseases.

During the Mughal Empire, classical khichdi went through several modifications. They were supplemented with nuts, spices, and dry fruits. During Akbar's rule, the royal kitchen prepared and distributed Khichri every day. Jahangir admired Khichri prepared with a large amount of ghee, fresh dry fruits, and nuts. There is a Khichdi recipe recorded in Ain-I-Akbari. Alamgiri Khichri was developed for Aurangzeb. The Khichdi recipe has been customized to conform to the Anglo-Indian delight, by adding fish and eggs to the ingredients during British colonial rule.

It was called Kedgeree and became famous during British times as a predominant breakfast. Soon it was proliferated outside India to the United Kingdom during the rule of Queen Victoria. In ashrams, churches, temples, mosques and synagogues, this concept of eating together is lived.

So the question is, how do we manage to integrate that value back into our busy everyday lives? It is phenomena like the Internet, Facebook and Twitter that are isolating us more and more. In addition, everyone seems to be busy only with his iPhone.

The coexistence disappears, you lose the relationship to each other. Thus, the culture is also impoverished. We need to reunite more with family and friends and also organize gatherings that cover topics such as diet and food culture in other countries. In this way we get to know different cultures through eating and thus connect with each other.

By means of the community eating, we can learn what it means to get in touch with oneself, to listen to the needs of the body and thus to practice more fellowship again. Healthy diet as love for yourself.

You can make your own Khichri with rice, and a combination of legumes like Moong and chana. You might even add vegetables and split wheat or Dalia. Ghee is an important ingredient according to the traditional recipe.

You can also add nuts like almonds, pistachios, cashew nuts, chironji, chilgoza, and dry fruits like raisins and chopped apricots to improve their nutritional value, as well as to garnish. The consistency of the finished recipe varies from being dry like a Biryani to wet depending on tastes and preferences. Khichri is served with yogurt, kadhi, and pickles. Traditional Khichri is not spicy. 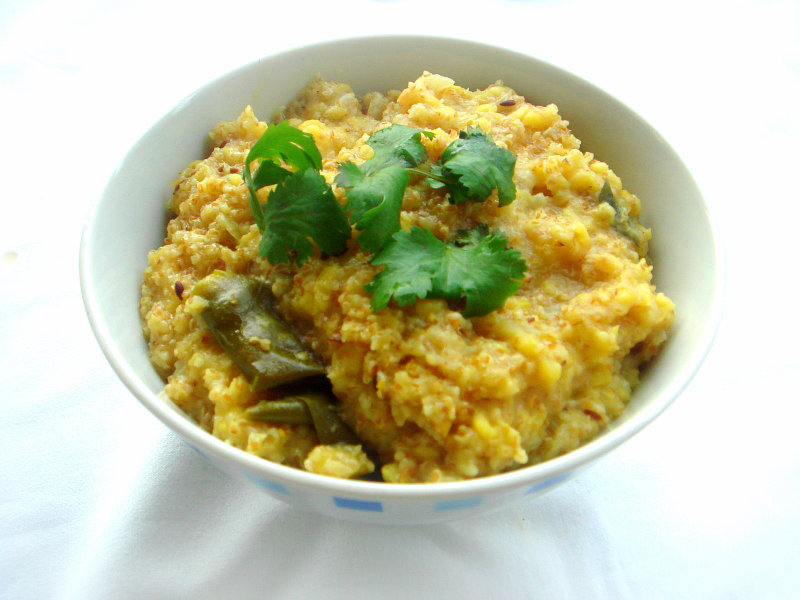 Wash rice and lentils together and drain the water out.

Heat some ghee clarified butter in a vessel and fry the bay leaves, ginger, garlic, cardamom, cinnamon, cloves for two minutes. Mix all the vegetables, potatoes, soy granules, lentils, mustard, jalapeno, turmeric powder and the rice except for the sweet peas, with a dash of salt and lightly fry for 5 minutes in 2 tablespoons of oil. Mix in 6 cups of boiling water and salt. Cover and stir fry on low heat up till done. Stir a few times. Once the water dries up after another 5 minutes, keep aside over very low heat to keep it warm.

Heat oil in a separate pan and add the cumin seeds and asafoetida and let it splutter. When the seeds crackle, add the onions, tomatoes, sweet peas and green chili and saute for another minute to let it turn golden brown. Once fried, add them to the rice and mix thoroughly but gently. Cover and cook for 15 minutes. Check frequently to make sure you have enough water and things are not really stuck to the bottom or is getting burnt up. When rice is done, season with salt and pepper. Garnish with cilantro.

Add lemon and serve with some fried fish, or eggs or even grilled veggies or pure ghee.