Getting to Sikkim is not easy. The option we chose was to fly to Delhi and there make a gate change at the airport to fly to Bagdogra, a city in the state of West Bengal. In Bagdogra we were greeted by a crushing wet heat from the monsoon rains of the last weeks that had turned the paddy fields on the sides of the runway into lakes.

Despite the strike in Darjeeling, we decide to continue our route to Sikkim. We find without problem a jeep for Gangtok via Rangpo. We start after one hour when it is full and pretty tight. It takes 3 hours to get near Darjeeling. For us, who already knew Dharamsala, the green and mountainous landscape became familiar to us. After 2 hours of driving the car stops near the border post. We have to show our permits, and a manager takes care to register us, and now we are in Sikkim!

At night Gangtok welcomed us on the eve of the opening of the Olympic Games. It was part of the Silk Road to Tibet and now is the capital of Sikkim. We see two pedestrian streets surrounded by shops, one of them still in the process of construction, so the monsoon drowns the crosses.

The advantage that it has is that it is the starting point for several excursions, the ones we did went to the Tsomgo lake and the Rumtek monastery. After visiting a dozen hotels, we find something not too bad. We choose a small guest house in the heights of Gangtok. We settle quickly in our room. By the window it is an incredible sight, as the streets are empty, and pieces of ice invade the city. We had a delicious meal prepared by the Tibetans who own our guesthouse. 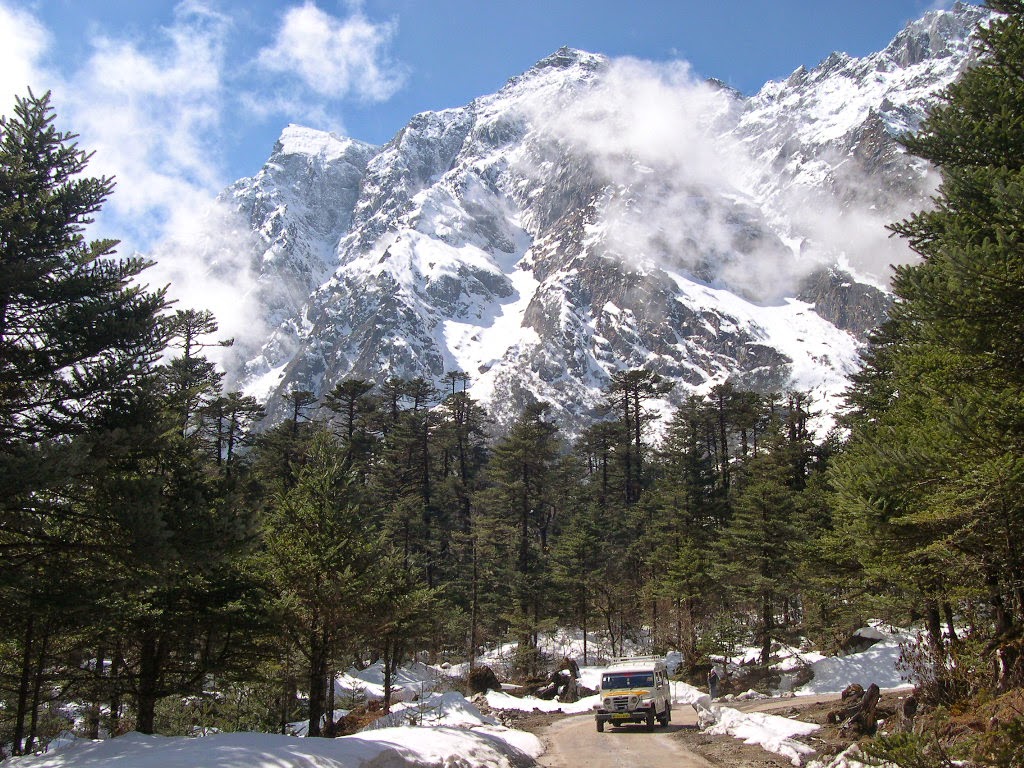 After the end of our night we were woken up very early by a relatively quiet knock on the door of our room. I had the good idea to ask the receptionist to wake us up if the weather was clear, to finally be able to enjoy the view of the mountains. Just a few hours after sunrise, the air becomes too much loaded and it is impossible to see them.

A little before 6 am, the room boy came to wake us up. We are happy to see the Himalayas in full glory. After a good breakfast, we left to the ascent of the city. The city is built on a crest and it goes up or down. I walk in the main pedestrian street of MG Marg. It's nice, and filled with a colorful crowd.

It is much quieter. The taxi rides slower and horn is much less. The difference is striking, and the atmosphere is much more relaxed. And there is even a pedestrian street. On each side, there are always nice views.

A lot of young people are football fans. We even saw a photo of Beckham in one of the monasteries. On the way, we visit a permanent flower show, with many orchids. In the midst of dozens of species, we found a little weird with hair on it. They sell bulbs at the exit and various seeds.

We pass by the White House which must be from the English period. Our second stop is far enough to Hanuman Tok where there is a beautiful temple. The place is very clean, and the landscape is very beautiful. We can see the Kangchenjunga which is the third highest peak in the world in the background behind the clouds. I could take the cable car to go see the point of view above but I preferred to return.

Then we went up to the Enchey Monastery dedicated to Padmasambhava that we had already seen in the documentary. We do not care, as long as we can continue to have our prayer wheels. Everywhere, the colorful prayer flags seem not want to leave us for a few trips. Young apprentices crossed on the way. The weather is nice, and the monks relax in front of the temple. The interior is really beautiful, full of Buddhas, and beautiful murals. We pass a nice waterfall.

We took a taxi today to reach Rumtek, a javelin throw from our hotel, on the other side of the valley. In other words a 24 km drive takes 50 minutes by car. It is the largest monastery in the eastern Himalayas. Rumtek monastery was built to house the monks of the karmapa order when the Chinese destroyed their main monastery in Tibet. It is guarded by the Indian army due to disputes between various factions of the Buddhist sect.

It seems that the XVI Karmapa (leader of the sect) died without giving the four keys to his assistants to find his successor. That is why the sect has been divided and now there are two karmapas with one in Dharamsala and the other in Kalimpong. In this monastery is hidden a black hat woven with hair of angels.

The possessor of the hat is the real karmapa and it seems that this justifies the deployment of the army so that no one tries to assault the monastery and take the trophy. When leaving towards Gangtok we visited a chorten built to appease a local demon that in the 70s was spreading epidemics and various disasters in the area.

Next door is the interesting Tibetan museum that shows ancient tangkas, pieces used in rituals of exorcisms and tantric contraptions with skulls and human femurs that recall the inevitable death. All these stories, in the light of modernity, computers, rush, asphalt, seem impossible stories.

Seeing the green and mountainous landscapes, we understand that Sikkim was a kingdom with a king with a crown, who fought with other kingdoms as important as Tibet, Bhutan or Nepal, and controlled part of the trade routes of the Middle Ages that later brought silks to the palaces of Europe.

The monastery is very beautiful, very quiet, far from the hustle and bustle. As always, we see splendid panoramas, and a pretty flowery vegetation. At a given moment in the village, the snow-covered Kangchenjunga was clearly seen. Back at Gangtok, we make a detour to the Chorten of Do Drul, then to the Namgyal Institute of Theology, a sort of museum on Tibet with many statues, icons, thangkha and tapestries.

To end the day, we take a short walk through the local covered market with fruit, vegetables, clothes, dried cheeses, marinated cow skin to chew. The salesmen easily send us a smile and willingly accept to pose in front of our objective. Women wear a gem of a nose that hangs until sometimes touching the upper lip. In the bays of the market three men covered with colored powder sell lottery tickets.

Tomorrow we take the road to west Sikkim. We had planned to go to Pelling, but having no reservation or even idea about where to stay, the owner of our guesthouse advised us to stay in a nearby village of Pelling, Chumbung, which would be much quieter while offering a breathtaking view of the Kangchenjunga, the third highest peak in the world.

Finally, we eat at the guest house with a soup in bed, buried under layers of duvets and blankets.