Dhansak is a delicious and popular Indian hot, sweet and sour dish, especially popular among the Parsi Zoroastrian community. It combines hearty comfort elements of traditional Persian and Gujarati cuisine with different lentils, freshly ground spices that makes it fabulously fragrant traditionally served with a pulao.

In Parsi homes, dhansak is traditionally made on Sundays with lentils, pineapple chunks, vegetables, chicken or lamb, spices, cumin seeds, ginger, and garlic together with meat and either gourd or pumpkin owing to the long preparation time with a fruity sweetness absorbed by the lentils.

Dhansak has its origins in a Parsee dish from the middle-east and Persia and was probably a very special dish cooked during any holiday. The dish served in Indian restaurants today is based on the addition of a lentil puree to the cooking process. It is described as sweet and sour curry with a lentil sauce.

The service varies from restaurant to restaurant, but often expect a pineapple ring to be included in the curry for added sweetness and contrast. Strength depends on the interpretation of restaurateurs or chef, so you must take the advice from the menu.

Dhansak is an Indian recipe with meat and lentil curry. It is a Parsi dish, which traditionally was made with lamb meat and served with rice. It has become common to find chicken or lamb dhansak, and it can also be a vegetarian dish.

Like many curries, there is some flexibility in the ingredients that are used in making dhansak, but the basic elements are the same and produce a rich, spicy, sweet-and-sour curry. As well as a protein, the dish typically includes pumpkin or aubergines, although other vegetables could be substituted. Oil, onion, salt and tomatoes are also always included.

Lentils, or dhal, are a very important component of dhansak, giving the rich sauce, nutty flavor. The lentils are normally purchased cleaved and peeled, so they generally do not need to be soaked before cooking, although soaking them can help reduce cooking time. Lentils that are often used in dhansak include red, yellow, green and black varieties. Split pigeon beans and peas also are commonly used.

A paste is typically made from garlic, ginger, cumin seeds, coriander seeds and cinnamon. This pasta also includes fenugreek seeds, black mustard seeds, black pepper, fennel seeds and powdered chili. Some variants also contain star anise and nutmeg. Other characteristic dhansak ingredients include garam masala, cardamom, cloves, chilli pepper and turmeric. The sour element of this curry is provided by tamarind paste, and the sweetness is provided by sugar or jaggery.

A common way to make dhansak is to make pasta first to get pure ingredients with a little water. The oil is then heated in a pan and the onion is sautéed until it is soft brown and golden. Salt and pasta are added and cooked for a few minutes until all the moisture in the pan has evaporated. Tomatoes and a small amount of water are then added to the pasta and onions, and the mixture is cooked for several minutes to allow the spices to develop their flavor.

The meat is then added to the pan. After the meat has been taken all color, lentils and water are added, and the mixture is brought to a boil. After a short simmer, the aubergine is mixed and allowed to cook until it begins to soften, at this point the pumpkin is added. The curry is then covered and cooked until the vegetables are tender and the meat is cooked.

To finish the dhansak, the tamarind paste is stirred in long with the garam masala and jaggery. Often, some of the lentils are then crushed to thicken the sauce. The finished curry is garnished with either coriander or mint leaves and then served. 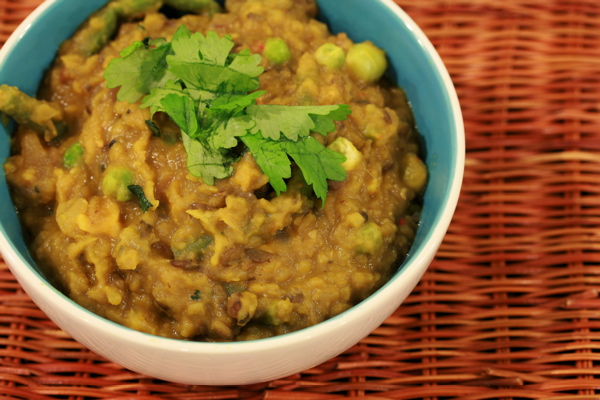 In a saucepan, pour in the lentils, 2 cups water, tamarind powder and the sliced onions. Cover and boil for 30 minutes over medium heat.

When the lentils are soft, mash them a bit. Reduce the heat to low and stir in the squash and coriander mixture. Add the salt, turmeric, cumin, coriander garlic, green chilli and ginger. Stir thoroughly and cook for 5 minutes.

Add the vegetables, coconut, tomato puree and the chutney and stir well. Allow to simmer together for 30 minutes. Taste and adjust for seasoning.

Serve with rice or naan.