We board the train and finally headed towards Siliguri. The destination station is New Jalpaiguri, the last corner in North Bengal and therefore end of journey for those who want to go to the Himalayas, Darjeeling and the state of Sikkim. The tracks continue, but in another direction, more towards the northeastern states.

We were warned that there was nothing to be done. Most of the travelers who came here stay only one night and do not linger. We spend more and at least that allowed us to rest in our room without any fuss and to plan our future destinations at our ease.

All through the journey sellers move around from the traditional chai/coffee shouted in a rather peculiar and irritating way. There are of course sellers of water bottles, newspapers but also glasses, binoculars and other small plastic toys. There were musicians and also Hijras. They perceive money without uttering a word.

Basically the movement never stop! Not to mention that people love music and almost all have one playing on a mobile phone with speakers, of course! We did not stop talking with the traveling companions. Especially we dedicated a lot of time to the pros and cons of the arranged and love marriage. We also talk about the Saraswati Puja which is celebrated today.

Basant Panchami is dedicated to the goddess. Young children begin learning to read and calculate in a ceremony called Hate Khori. Parents help their children write. The popular belief is that children who begin to study that day will receive special gifts from the goddess.

The usual train delay exceeded the expectations of the most pessimistic on this occasion and accumulated ten hours in total. I met on the train another traveler who was going to the same station as me. As we would arrive at an untimely hour we agreed to take a taxi together to Siliguri, a few kilometers from the station. Our new partner had a room in a hotel, but we followed our instinct and decided to find ourselves.

I will never recognize him in public but we were about to regret not having gone with that man with such long dreadlocks and that expression that should be what he have left when he spent five months more than projected on a beach in Goa from party to party and smoking until the fence really.

The fact is that when I was left on that inhospitable avenue at 12 o'clock at night, I found only hotels that were closed at all times with the metal locks lowered and a security guard at an ATM. All hotels are full of course. I do not believe anything and keep looking until it started to rain.

The spirits, although not intact, were in good health and we put the raincoats in an agile blink of an eye. When we got a hotel guard to pay attention to us, we were ready to accept any room but the man offer us to share with him and another employee the floor of the hotel office, and we continue looking. At the end we found a nice little hotel, unlike the rogues listed in the Lonely Planet. We got a nice room in the hotel without having to negotiate, with a lovely staff. 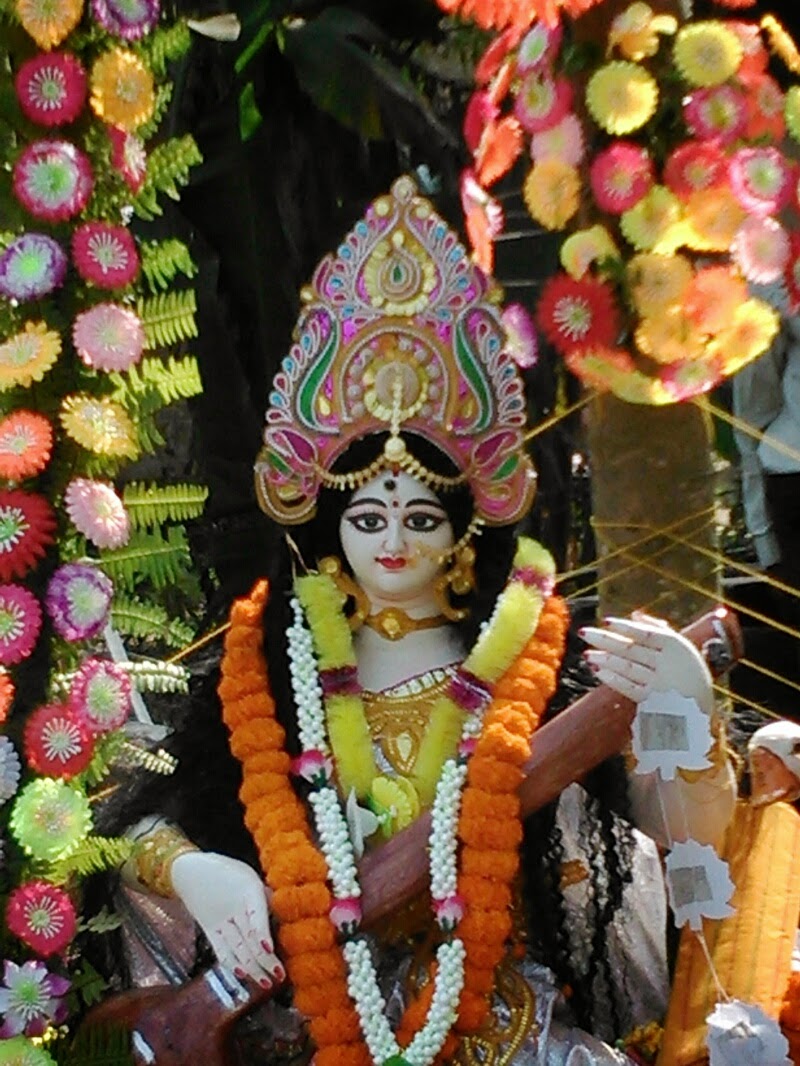 At 7 o'clock in the morning we were awakened with a thunderous music because a neighbor was getting married the next night. We took a walk. In the big main road rickshaws, motorcycles, cars and jeeps jostle. The noise is more abominable than elsewhere and the drivers even more insistent. On the pavements, I see a weed merchant and other weird stuff that stirs up remedies in his mike. I see a tattoo artist in the middle of an ornamentation job on a guru sitting on the ground, and a traveling street scout.

Towards the city center we cross a large bridge, above the Mahananda River, lined with homes looking like slums. The atmosphere is lively and rather happy. It's colorful, as children play and laugh in the streets. From this bridge we witness many scenes of life! In Kolkata, everything, absolutely everything could be done on the sidewalks but here it is in the water.

This river serves as a public bathroom, a washroom, washing machine and dishwasher, a playground for children. Some also give spa-massage to buffaloes which are really pampered in comparison to the poor cows who wander alone in the streets. To top it all, it is upstream of the river.

It is also the day of the end of the Saraswati Puja festivities when we arrive. All the idols are brought into the river for a final tribute and a good dose of extra waste. Saraswati Puja is celebrated throughout Bengal by schoolchildren and students who ask her for help to succeed in their studies. Each school and class organizes a procession. Young priests recite mantras, sing and dance while walking with the goddess effigies in the streets.

The religious songs are drowned in a thunderous profane music. Young people dance to the disco hits of the latest fashionable movies. They sway with enthusiasm with the face and hair sprinkled with red, the forehead girded with a red or orange band, inspired by the Bollywood dances. A group of older women look at this outburst with disapproval.

Sitting on a cart, sometimes a truck, the goddess Saraswati sits on a white lotus, symbol of purity. A swan is at her side and her four arms seem to bless the crowd. She holds a book in one hand and plays the vina, a stringed instrument, on the other. A second trolley follows, trimming a deafening sound made of a pile of heterogeneous speakers. A third carriage carries the generator, all connected by a large entanglement of cables.

The young men push and pull the carts. They advance with difficulty on uneven ground. The jolting makes the statue and the wall of speakers wobble. There are cries of panic, laughter, contradictory orders. It's a big mess. The statue finally finds its seat and the procession continues until the next obstacle.

Armed with fork, high school students raise the many electric wires that connect the houses. The convoys pass just below. When a cow passes, insensitive to noise and agitation, the procession stops. If the cow stays in the middle of the path, it is gently pushed, and the goddess can continue her journey.

The processions of schoolboys and schoolgirls in uniform, descend the steps of the ghats, carrying small idols with two or four arms. Escorted by teachers and parents, a group boarded a boat and moved away from the shore. Then they immerse the richly adorned statue in the river. The goddess floats on the water surrounded by dozens of small candles. Leaving room for another group, the boys arrive, a little sober, happy to have accomplished the rite that will ensure their success in their studies.

The center of Siliguri really has nothing nice. Everywhere there are shops on top of each other, from smartphone to restaurants. The bazar is full of plastic stuff made in china. In the evening we enjoyed the wedding procession of the groom of the aforementioned wedding. According to the general norm, the bride waits for the stranger in her parents' house, whom she will see for the last time.

In a short time, the groom arrives with a frightened face in this case by car. In front of him, the male guests on the groom's side dance frantically at the head of a procession that is completed by musicians (percussion and wind-metal) and an escort of eight or ten bulbholders that provide a strident lighting of connected fluorescent bars to a gasoline generator that encourages musicians to burst noise pollution levels to dampen the engine's own smoke.