The Air India flight arrives half an hour early in Delhi. 4 hours of transit is long, before continuing to Calcutta. All the longer as our flight was delayed. I had never experienced such a departure! Once embarked with an hour late, I doze and realize that we are served a meal while we are still on the tarmac. The door slide open.

The fuel tank is too full and for safety it is being lightened. The mechanics are busy. The many muslims aboard do their praying, and spread their mats where there is room. A small group begins to gather around the hostess. Only one passenger begins to get upset and raise her voice as if the hostesses was responsible for everything.

My neighbor shares his wifi code so I can warn the hotel of my delay. After another good hour and we can take off. I arrive at the hotel in an hour and a half, by prepaid taxi. The boss celebrates his birthday and gives me a piece of cake which will suffice me for dinner! The room is on the back and nice with no stairs to stuff me.

There is a small opening overlooking a corridor but very clean and a hard bed but does not matter when you are tired. 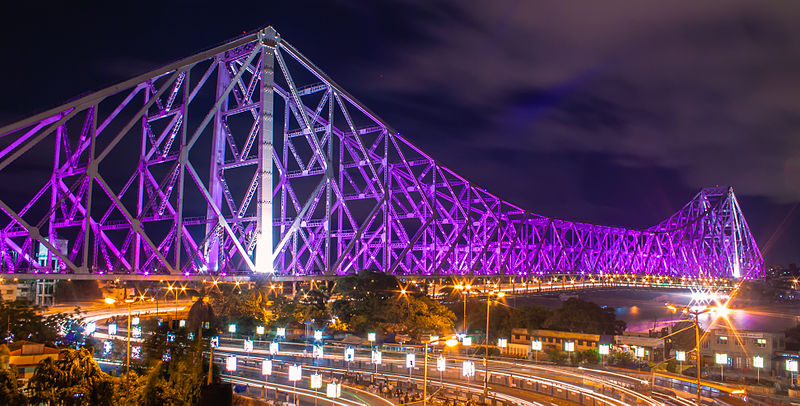 I wake up at 9 am and stay in bed until 9.30. I start the discovery. It is always with a little apprehension that I go out of the hotel for the first time especially afraid not to get lost in these congested labyrinths and galley. After, breakfast, here I am with the camera, map, guide, bottle of water, and chips in a lightweight backpack! The morning mist rises a little but the heat is there.

I feel well lost anyway. The easy way would have been to take a private driver for the day by reserving it the day before, but the price is dissuasive. Rickshaws in these areas are prohibited, but yellow or white taxis crisscross the already crowded streets.

I walked a lot because taking a taxi is not so simple with a lot of traffic, and nothing seems far on the map. The West Bengal Tourist Office where I have to pick up a permit to visit the Marble Palace is open but the staff arrive at 10.30, the caretaker tells me nicely.

I use this time to go to the beautiful circular building that is the GPO or General Post Office still in the mists. I buy nice stamps to use in my travel diaries. It takes a while. I cross the BBD Bagh and the park where small herds of goats are having fun.

The tram surprises me. It arrives rattling and I have plenty of time to admire this vestige, which brings me a smile! A charming gentleman helps me to spend half an hour and a selfie before leaving! The Bengal office ticket office is still empty at 10.30 past. The employees arrive slowly and take the time to settle down.

Once my visit permit for the Marble Palace is duly stamped, I'm back to the Howrah Bridge or Rabindra Setu, the symbol of Calcutta. It is the sixth largest bridge in the world in its category. About a lakh vehicles pass there every day and the estimate for pedestrians is over a million and there are many animals too. No one counts them.

The width of the bridge is 30 meters, and 656 meters long built in 26,500 tons of steel, with eight lanes constructed between 1937 to 1943. At the time this construction was revolutionary. It is especially necessary and vital for the city because it connects the city to the Howrah Station, which is the main station of Calcutta.

I admire the Howrah Bridge from the Mullick Ghat flower market. With Mysore, the flower market of Calcutta is the largest in India. The lands around Calcutta are indeed particularly suitable for growing flowers. Bengal has some of the largest plantations in the country. Here too, I am amazed by so much effervescence. In this bubbling place, beauty flirts with dirt. The intoxicating scents of flowers mingle with the unpleasant fragrance of mounds of rubbish.

Nobody pays attention to me and I have plenty of time to hang out. Roses, gladioli, sunflowers, orchids, jasmine, carnations compete for places. It is perhaps one of the few places in the world where flowers are sold by the kilo. The multitude of flowers and, garlands will be sold in the day to honor the gods, and also used for parties, weddings.

Everywhere, endless rows of men carrying huge bales filled with flowers on their heads intertwine. Thousands of little hands are working on making garlands of flowers under makeshift shelters or on the ground. The sellers at the auction are fiercely competitive.

I take refuge in the shade under the Howrah Bridge by the river Hooghly, one of the tributaries of the Ganges! I take the opportunity to look around me! I see men weighed down by their load balancing on their heads, shoulders with hundreds of necklaces of flowers that coat them with a giant yellow down jacket. Without wasting time, they join the bridge by climbing the stairs as quickly as possible.

I try to take a photo but a whistle reminds me that it is forbidden to take pictures on this place considered still strategic. A police officer took me to the police superintendent near the steel bridge. The police chief asked me if I took pictures of the bridge. I did not understand why, and so I say to him that I did not photograph the bridge, and they let me go.

I did not know that this bridge is a sensitive place like military bases. Later I notice a sign near the gate and try to be innocent. This time I take a meter taxi to Marble Palace, a beautiful building that deserves a little more maintenance. Photos of exteriors and interiors are forbidden. I sketch some architectural details sitting on a bench in the garden, waiting for the guide.

I get a taxi to Victoria Memorial, a nice place with a lot of couples and families. Couples sit in the grass facing the lake with the beautiful white buildings surmounted by domes. They come to see me, timidly without speaking, or slip me some compliments on my drawing. Few young girls even start a conversation, to finish with the usual photos.

At 4.30 the heat falls and I store my equipment. I reluctantly zap the visit to the Kali temple. The taxis on this friday night are all full and I walk back, not without having asked several times my way to the Indian Museum, a good landmark to locate my hotel!

At 7.30 finally I'm on Sudder Street and in less than 10 minutes here I am home. I have dinner and I have not swallowed anything since breakfast and quickly to bed. 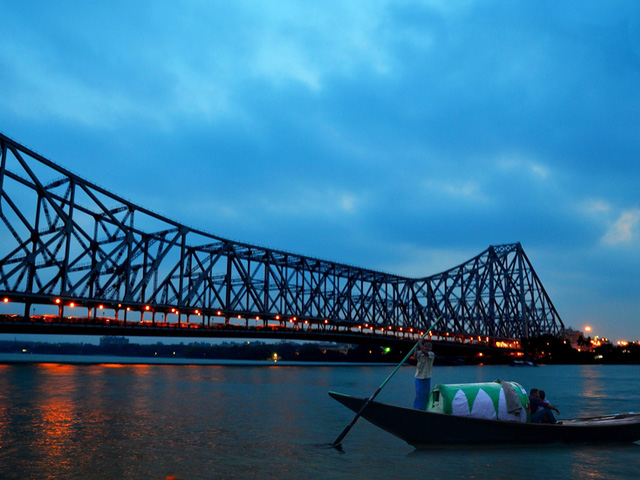