We arrived in Dharamsala in the early morning, a little cold after a night from Shimla in a rattling bus, with windows that did not close fully. The place that keeps us going is Mcleod Ganj, known to be the home of the 14th Dalai Lama and the refugee center of Tibet just 10 miles away, but why is everyone talking about Dharamsala, if it's up to Mcleod?

I still do not know. We remain stunned by the large majority of foreigners who walk the streets. It was not only our dream, but that of thousands of Westerners. Yes it became very touristy, yet we feel good. The climate is mild, and we can talk freely with young and old Tibetans and monks.

While this Western migration has had to bring its share of changes, but it is (for the moment) largely acceptable. It also allows to bring a lot of money to the Tibetan cause, and also it must be said, to find Wifi internet in all the cafes and restaurants, to be able to eat western breakfasts, pizzas, fries, hamburgers, and even pasta!

Fortunately for low-budget guys (like us) we also find momos, bread, fruits, chicken pakoras at the corner of each intersection. And of course, it is also a very active place for meditation, yoga, massage, cooking and Buddhism courses. We book a hotel close to the bus station.

As soon as I arrived I loved the green mountains and the serene landscape, although there were many tourists. Where are the locals? I told myself. Those we saw almost did not give us much importance, and are super quiet. And the most restless monks I've seen carried cell phones, backpacks and ate in restaurants.

Finally, a good breakfast later with momos on the menu, here with spinach, we go to the residence of the Dalai Lama, to walk around the temples, admiring the fantastic view of the mountains. Here also we chose the crest of the hill to settle. While walking on the hillside, we see ruins of churches lost in the trees, with small cemetery, which testifies of British presence in this hill station.

We start with a decided step towards the small village of Bhagsu, where a small temple but especially the waterfall worth it seems it detour. We walk down to the city, to come across Dal Lake! The lake is located on the top of a hill. We walk a little, and then we get hitched by a Tibetan with his girlfriend. We chat a little on the way, and he explains the reality of international diplomatic issues. He was born in Leh, capital of Ladakh, lost in the mountains.

His parents are exiled Tibetans, and he has a residence permit in India, which allows him to travel abroad, but remains a fragile situation, because every year this permit must be renewed. His wife is from Lhasa, whom she fled with her brother a few years ago. She does not have refugee status in India, because it would be a little tricky compared to the Chinese, and her stay in India is also fragile.

Everything flows, there is no reason to be angry, Shanti, Shanti are some of its maxims. Mix all this gibberish with the Om Mani Padme Hum, the unmistakable mantra sung by Buddhist monks and who put at all hours of the day the shops that sell music, listening to each corner. Something that accompanied this moment and all those who lived in McLeod Ganj was listening to the Om Mani Padme Hum, a contagious mantra that after a while I surprised myself by humming it. We hear it everywhere, in the restaurants, in the streets, in the markets. It is inevitable to learn the tune.

The official translation is the jewel of the lotus flower, a flower that grows in the mud, but still remains impeccable. And that's how we're supposed to be, too. Asking people, they gave me other interesting meanings, such as let peace resound on Earth or the God within greets the God outside us.

Add the smell of the incense sticks that impregnates everything and we already have the cocktail that gives the place that unique air, that unmistakable Asian flavor, but different. A scenario that is at once chaotic, decadent and futuristic. A scenario that would be ideal for any filming of the millennial saga.

And another common thing to see are prayer flags in the mountains or in very high places so that the good wishes and hopes that they contain may spread around the world. They are of five colors and each of them refers to an element such as fire, water, earth, metal and air. But each person has different points of view regarding this too.

The goal is to go to the Norbulingka Institute, a Tibetan traditional arts conservation center. This is why we visit the most charming hotel in McLeod Ganj, which is beautifully decorated with traditional Tibetan objects made in this center, and organizes excursions to this place. The place is idyllic. It is a modified reproduction of the Dalai Lama's Summer Palace in Lhasa.

The set of buildings, at the center of which flows a river, represents a god with many arms. The place, drowned in the vegetation, is calm and relaxing. A young Tibetan girl gives us a very informative guided tour. There are sacred cloth painting, wood carving, embroidery, furniture and lighting workshops.

At the end of the visit we go to the temple which is very large, very beautiful and has a huge piece of embroidered fabric which has lasted a year. The walls are very high and the warm colors are beautiful. I think this is my favorite Buddhist temple. We sit cross-legged on large cushions to appreciate the place. It's cool. At the exit of the temple we visit a small museum of funny traditional dolls.

In the evening, it's still pretty cold. We choose for dinner, a restaurant and enjoy a bottle of local cider and we take the opportunity to taste new dishes, like the delicious paneer tikka with rice, potatoes with cream and cheese, but especially a wonderful mushroom curry, succulent. That night we slept like rocks. 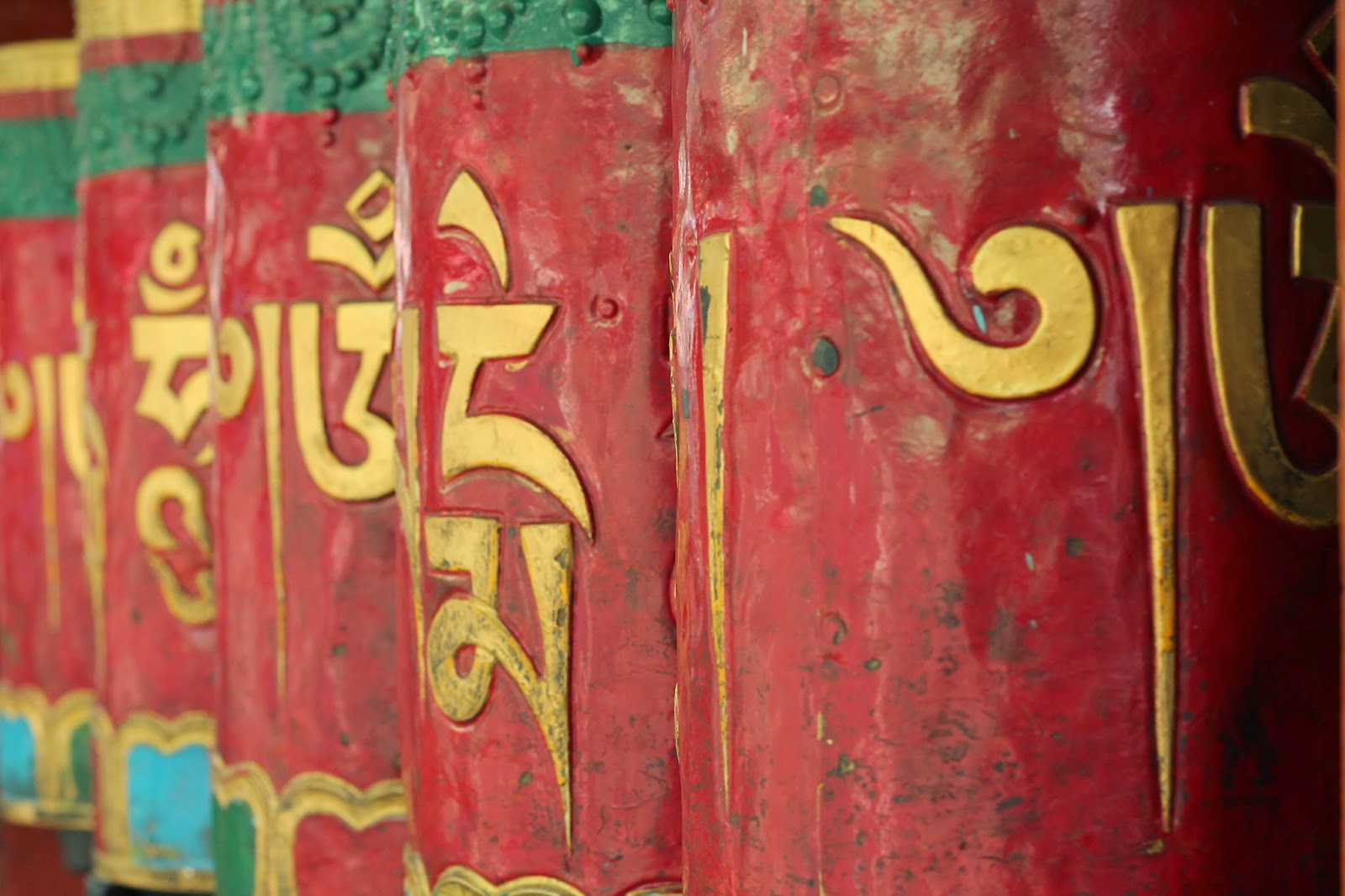