I woke up very excited! The long-awaited day had finally arrived. Today we had to leave the hotel in Hollywood and head towards Anaheim, about an hour away from where we were to go to Disneyland (my favorite part of the whole trip). At night I got an idea in my head, which in the morning was not only an idea but had become something that I had the need to specify and was to buy a professional camera.

I thought that if I let the opportunity slip away, I would not have the chance to get it at such a good price as they have there. So that same morning, I decided to find a place to buy one. We searched the web and found a place that was not far from where we were. So we had some quick breakfast and left immediately, after checking out at the hotel.

I was going with some concrete options of what I wanted so I just asked them to show me that. We decided on a camera, with many features. We got it with a standard 18-55 mm lens (those who know about photography will understand what I mean). Now I plan to take a photography course, of course, to get the most out of the new one.

We decided to continue traveling, so as not to delay much. There were a couple of places we wanted to go through before we finally left for Anaheim. The first one, we had closest was the house of the American Horror Story series. I know many will not know what I'm talking about. It was great and had excellent reviews.

And of course I was crazy with the series! I searched with Google Earth and discovered that it was in a quiet neighborhood of Los Angeles. So we went there! We continue on our way. The next place we would visit would be the houses where the Charmed series was filmed. And I can tell you that in that block, any of the houses that had deserved to have been in a series or movie, were all of the same style.

We left the place and we went to the Staples Center (Los Angeles Lakers Stadium). The place was full of people, because they played a game of basketball. We decided to continue traveling after several photos of the place. It was already close to noon and we decided to stop at a Burger King on the way to eat something and give a pull to Anaheim to be able to leave immediately towards Disneyland.

We ate pretty quickly and we continued our trip. In an hour we reached our destination and we started to see the Disney buses around the place. We showed up at the hotel, located a few steps on the sidewalk in front of the entrance to Disneyland. As it was not yet time to check in, we left our bags in the car. They gave us permission to park and without waiting a minute we went to the Disneyland parks. It was 1.30 in the afternoon.

We crossed the street and we were already at Disneyland. After passing the small welcome arch to the complex, we walk a few meters to the entrance of the parks. There are two Disneyland parks in California. There is the Magic Kingdom and the Disney California Adventure. Most of the attractions are the same as in Orlando and these parks were much smaller than the ones there.

That day we decided to dedicate it go to the Disney California Adventure. So without wasting time, we lined up to get our tickets. I had the voucher printed since I had bought them online. I just had to present it and they changed it for my tickets.

We entered the park around 2 in the afternoon. The first attraction we found was Soarin' Around the World, but as in Orlando, at that time it is almost impossible to enter. So we decided follow the road. We look at the different corners of the park.

The first attraction we entered was that of the Muppet Vision 3D, which is exactly the same as in Orlando. Stuck to that is the Monsters Inc. This is different from Orlando where they tell jokes and stuff. Here on board some very nice taxis we toured Monstropolis, the city of the monsters. When we left there we met Sully. I love Kitty!

The Disney Dance Crew show started and so we sat in the front row to enjoy it. It is a short show with some very hyperactive dancers and of course the star of the show is Mickey. When I left there, I tried to see how to go up to the Hollywood Tower. I watch a mini parade they did with the characters of Pixar. We got in line to go see the Aladdin musical, which lasted 40 minutes. The show was very nice. It's the Nemo style in Orlando.

When we left there, we went to the area where the most attractions of the place is for the little ones. We toured the place a bit more. We continue on our way to the Pier area, where there are attractions such as Toy Story, the Screaming coaster, the Ferris wheel and a couple less relevant ones. It was already night, so we had to discard Toy Story.

It was impossible to enter at that time, the same as the coaster. We took a couple of photos and I wanted to climb the Ferris wheel. The truth is that I was quite bored. Some cars were shaking a lot and it seemed fun. Mine did not move anywhere. When we went down, we continued to take pictures of the park at night.

We decided to leave the park because we had reserved a dinner with characters at the Disneyland Hotel. The chosen restaurant was Goofy's Kitchen. We were exhausted. It had been a very long day, and if it was not for dinner with characters, we would have run to the hotel. We did not know very well where the restaurant was located and so when we left the park we started asking.

The Disneyland hotel where the restaurant was is at the end of everything. We arrived just in time, and we only had to wait a few minutes for them to take us to our table. The food was buffet style and it's the only one I do not have photos of, as between fatigue and hunger I forget to take the camera out.

We left there. Our feet could not go one step further. We cross the entire downtown and the stretch of the parks to the hotel. When we arrived we checked in that we had not yet done. The employee told me that he had all my online shopping packages waiting for me (almost forgot about them). He told me to go look for a car to load them because they were very big.

I just thought how I would take it in the suitcase. We loaded everything and our room that by the way was on the second floor. We settled into the room, by the way very spacious and clean, with everything necessary. We opened all the boxes of purchases and happy with everything I had received to rest! We bathe. I started to charge the battery of my new camera to premiere the next day in the nicest park in Disneyland. 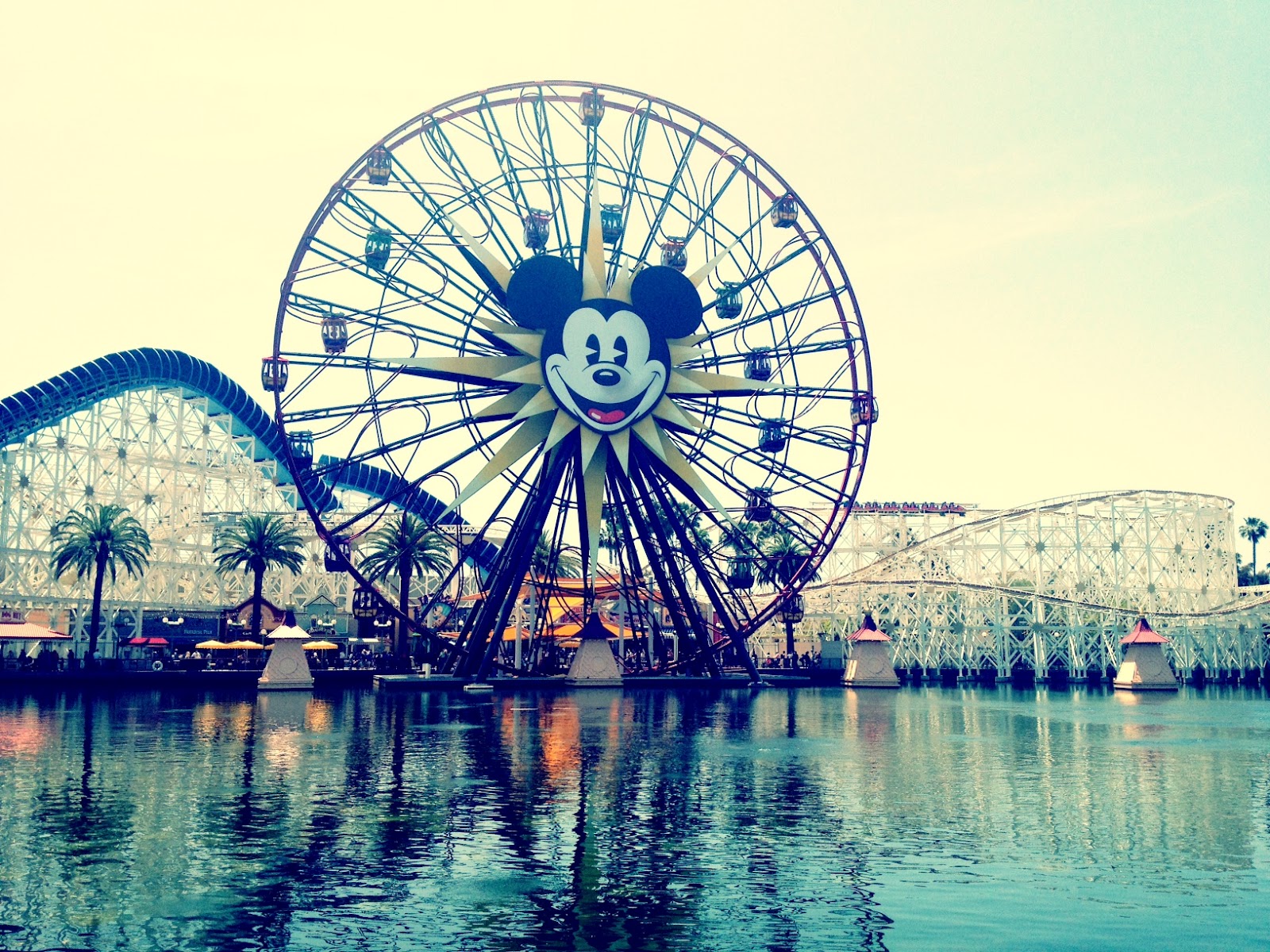