We get up as usual at 6.30, have breakfast and see how our ship docks in port with two other cruises. We arrived in Philipsburg, the capital of the Dutch part of Sint Maarten. The island is divided in two parts. The northern part belongs to France and the southern part to Holland, which is where we arrived. At 8 we disembarked and we got a good first impression since everything is very clean and well taken care of.

Everything is very well organized and there are a lot of shops and people offering tours. Today we plan to go to a good beach and then see the planes land in Maho Beach. We know that it can be done cheaply in public transport so we go to the tourist office to ask how to go to the center from there.

Already with a map in hand, we take the typical photo of arrival and we started the way on foot to the city (we have been told that it is 20 minutes on foot). Before leaving the port area, we found a statue of the last governor who was on the island. We already see that there are signs indicating the way to follow.

Then we come to another area of ​​stores that, because of the early arrival, remain closed. There is also a kind of walk where I try with the help of the map to decide which road to take to find where to go. We decided to go, first, to see Fort Saint Louis. For this we must reach the French capital, Marigot.

The taxi leaves us in a square and we walk up to the fort. Fort Saint Louis was built in 1767 to defend against invasions. It's free, and it's up high, allowing fantastic views of the bay. We walk through it and touch the cannons that was once shot against the Dutch or British who approached by sea.

From there, the street is very long and there are no signposted stops so we were lost when suddenly I see a dark blue van approaching with a sign on the front that says Maho Beach-Airport. Without thinking about the stoppage I ask him if he goes to Mullet Bay and the driver answers yes.

The back door opens and we settled inside as we can. Until we arrived at our destination he made several more stops. The road to Mullet Bay passes through an inland lake and we only make a brief stop at the Princess Julianna airport. So in 30 minutes we arrive at Maho Beach where all the occupants except us get off. He leaves us 500 m further on the road on a path next to the golf course. We got off.

The area where he has left us has shops and some hotels so there are enough tourists. We walk about 100 m and we arrive at Mullet Bay, a large beach that at this early hour is quite lonely. In addition, suddenly it's sunny, suddenly black clouds come and it rains few drops. In the sea there are huge waves, of several meters. So much so that there are several surfers in between the waves.

At the beginning of the morning, we do not dare to take a bath so we stroll along the long beach with calm water that also looks very beautiful. Slowly, the beach gets filled with people from the ship and the hotels and many people dare to take a bath. So we risk it too, although something dangerous because there is a hangover and the waves are very high!

At about 11.30 am to change the beach we collect everything and go back to the golf course and the shops where the Van left us. There is a supermarket there so we bought some cold drinks and we walked towards Maho beach which is the beach in front of the airport.

There is a sign where it warns of the danger of being there but still people do not usually pay much attention. When we get to the beach we see that although it is still cloudy, the water has a very nice color and it seems that there are not so many waves. Also, the first plane arrives immediately.

The beach was overflowing with people! There is almost no where to leave things. One of those giant waves came with so much force and was so big that it covered all the sand of the beach wetting things! Luckily, we picked up the bags in time where the valuables were and that did not get wet but the towels were soaked. We saw how there were people who had the photo cameras and the money soaked. It was a fun time to see all the people shouting when the wave came but then we see the destruction.

While this was happening, the girls were at the bar quietly watching a group of music act. In that same bar, they have a surfboard stuck in the sand with the information of all the flights that arrive that day. We were there for about an hour and saw a lot of small airplanes of a certain size as the airport is right next to the beach. So the landing strip is less than 10 meters from the beach.

When we were already picking up to leave, a very kind lady told me not to leave, as it was time for the biggest plane to land. We paid attention to her and we stayed. That was a spectacle because the plane was very big and felt really close. The atmosphere of the beach frenzied, especially thanks to several small groups of drunk people.

After this plane everyone started to pick up and leave. So we hurried and we got on the first van we found towards Philipsburg. At about 13.30 we get back in the city next to the market. Here we look at several shops but we do not see very interesting things so we do not buy anything.

We continue to the beach and find the old town hall, which we did not see this morning. As it is early and the day has improved a lot, we decided to stay a little longer on this beach that is next to the port. It is called Great Bay and the truth is that it is very good although most of the cruise passengers are right now in it.

From the beach we can see how the port at this time is also full, with the cruises that were missing this morning there. We want to freshen up with a bath but before we ask a lady to take a picture of us at 2 o'clock. Already in the water we continue with the photos.

At 2:30 we decided to go back to the ship taking a walk through the shops that were closed this morning. The area now has a lot of life and as I said this morning, everything is very beautiful. The road to the ship is a calvary because it is very hot and we have burned so we have to take the wet towels on our shoulders to avoid getting burned even more.

When we reach the dock, we see that the huge boats stand between boats in the shade. It is impressive to walk around there. We go along the beach that is right there, quite beautiful and with memories in the form of figures that were filmed there with some of the Pirates of the Caribbean movie, with a cool seafront and shops and bars well decorated.

We go to eat something and the rest of the afternoon is spent in the pool in the shade until the time of departure and we go up to say goodbye to St Maarten. Then we go to the cabin, where we meet a new guest. At 19:30 we went to the theater to a very entertaining show that came straight from Las Vegas (that's what they said and the truth is that it was fun).

Afterwards we had a good time in the champagne bar, where today they have a discount on margaritas. The rest of the night was dinner and little else. Night falls in St. Maarten and from the balcony we say goodbye to this beautiful island as we set sail for Martinique. 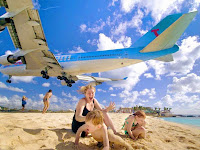