For me, the visit to Udaipur was a great success. Besides being beautiful, I felt that walking through its streets was much more pleasant than in other parts of the country.

At 7.00 am punctual we have breakfast. Despite the sumptuous and exciting dinner the previous evening, we are hungry! The hotel's buffet is remarkable, as is everything else. So we have our breakfast/lunch and with regret, at 8 we leave Narlai, to our next destination of Udaipur.

Our driver takes us on a very scenic road. I do not know if it was the only one available. I had a couple of maps of Rajasthan and both were discordant. But it was nice to cross this mountain pass. At one point we found a lot of impressive monkeys. They were everywhere.

Once out of the mountain the environment was always very rural. There were only fields to be cultivated and reservoirs for irrigation. With curiosity, I have noticed the use of old methods to draw water and channel it in irrigation ducts. Even today they use animal strength and a system of buckets.

We arrived at Udaipur in the morning and after a couple of laps we ended up in a haveli just meters from the bridge that connects Hanuman Ghat with Gangaur Ghat, separated by Lake Pichola. Even though the lake is very dry, the landscape is really charming. It is said that this is one of the most beautiful cities in the country. I cannot compare because I have just started, but I really like the atmosphere. They are narrow streets with many colorful businesses, very friendly people and palaces in the shape of an island in the middle of the lake.

We started the morning taking a taxi to the Sahelion Ki Bari garden, located near the Fateh Sagar lake. There we could see beautiful floral arrangements with water fountains adorned with typical details of the country.

Back to the tourist center, we bought a combined pass that included a tour of the different rooms of the City Palace with its interior museum full of paintings and a boat ride on Lake Pichola to another palace located in the middle of the water called Jag Mandir which, nowadays, works as a luxurious hotel.

We are ready to visit the City Palace immediately. Honestly, I did not really like the impact with this city. It is very touristy. It was the first place where we found many western tourists. City Palace has several entrances, one of the main ones is through the north door, Badi Pol. Although we did not enter here because the play seemed the same as that of Jodphur Fort. In the city palace, we could not move around due to the crowd of people. Maybe, in this case, we missed the visiting time. It was to be visited early in the morning or later in the evening. We went through the other south door of Sheetla Mata since we had no problems.

We also did the boat ride on Lake Pichola that was very impressive. The beautiful views of the Jag Niwas palace which, nowadays, works as a luxurious hotel and the rest of Udaipur are worth the trip that inevitably ends with a visit to the island of Jagmandir. Here, the palace built by the Maharaja, now houses a bar, a restaurant, a spa and a small hotel. The Taj Lake Palace can only be visited if one is staying there. This hotel was featured in James Bond's famous Octopussy movie. It is a film that remains alive in the city, and telecast everyday in many restaurants at the end of the afternoon.

Back on the mainland, we decide to go into the old city of Udaipur, between the narrow streets and the bazaars. Finally, the groups of tourists, who are very careful to visit certain places, disappear and the chaos of the Tuc Tuc and the people regain the upper hand. After that we went out, we walked a bit more. We had lunch at 4 in the afternoon with rice and cooked chicken completely covered in curry. I do not know what it is but I love it. 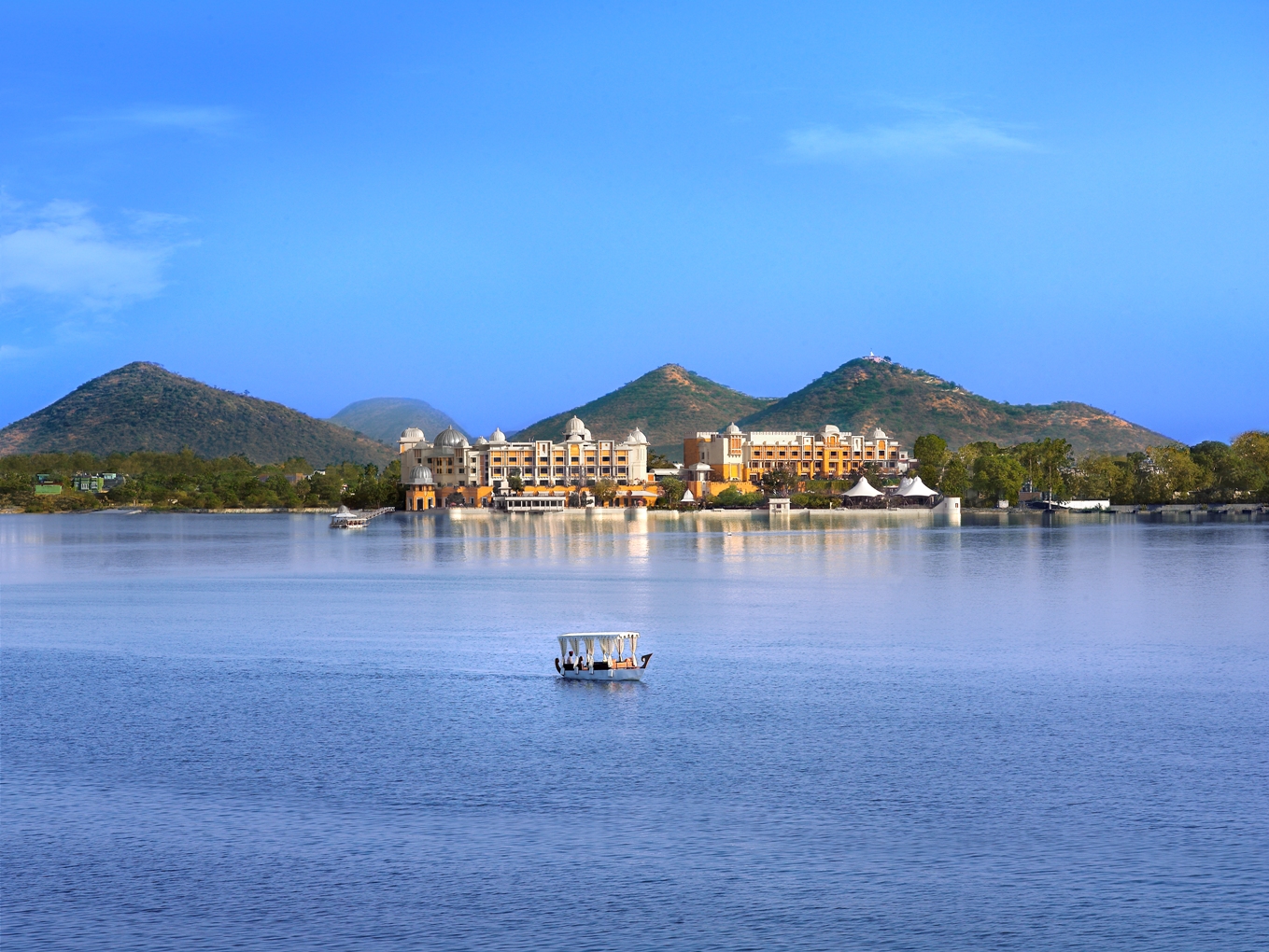 On the steps of the Temple

We are faced with a very high and very steep, very impressive staircase. This is the ascent to the Jagdish Temple, Indo-Aryan temple. There is a remarkable view from the top of the staircase. Going down then I stopped by a guy. I did not understand if it was a beggar or a priest. He was intent on repainting and coloring a deity. He tried to explain to me what he was doing, speaking a strange language. Obviously, I did not understand anything. The only thing that was very clear is that he wanted a tip.

On the way back we came across many shops, some selling food, some very bizarre, selling dentures and used glasses. You read that right, you do not need to come back. I did not want to deepen the origin of this goods. The predominant color, white, that appeared in most buildings and palaces. It gave the feeling of more organized chaos. The salespeople were not so aggressive and it was almost you who had to start with the game of bargaining.

The evening is approaching. So we try to regain the way of our haveli, but first, we stop at Gangaur Ghat, a small square that can be reached through three huge arches. The view of the lake is enchanting. Other people have stopped on the steps that go down in the water to admire the sunset. But for this, we have our private terrace at the haveli, which is immediately next to them.

It is not too late, but we are very tired so we go back. On the way, we bought for dessert a kind of round nougat made of a sweet brown paste of milk and a lot of peanuts. 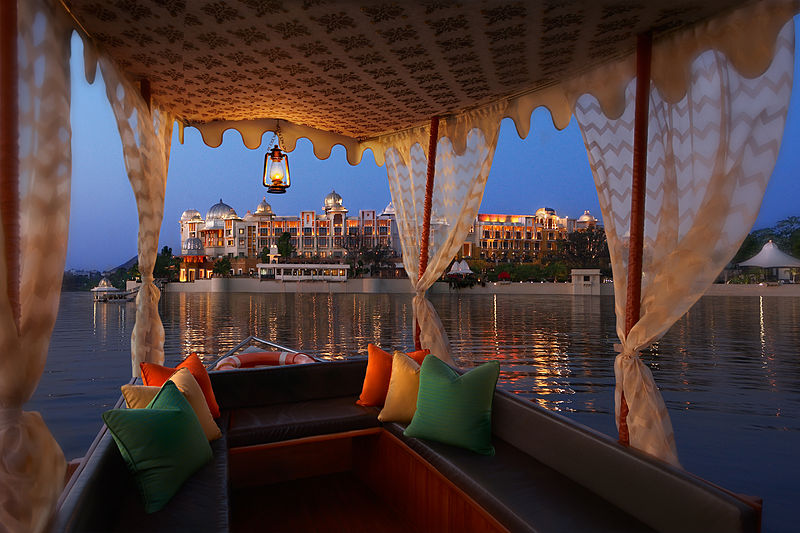 Panorama from the room

The view from our room is exceptional, which is on the terrace. Opening all the tents we have a panoramic view of the lake directly from our bed. The sunset is poignant and reconciles me with Udaipur. Reviewing the photos, probably the first judgment was spoiled by the hordes of tourists we met because indeed Udaipur is still something different to see in Rajasthan. Definitely a very romantic place, probably I would have liked the City Palace if only I could see something since it was completely saturated with people.

For dinner, we stayed in the haveli. The restaurant is on the terrace with the same view of our room. The food was really genuine and as always, typically Indian and very spicy. The next day we expect the transfer to Bijaipur, where tourists will probably be just a memory. Udaipur is perfect to relax, to dream, and to fall in love. It is a fairytale city, like a thousand and one nights.