Chittorgarh was a passing city, between Udaipur and Bundi, where I only stayed a few hours. And I did not see anything well. It was very cold, completely cloudy and foggy. I made time in the waiting room at the train station to see if I would get up the day but nothing. What brought me to this haunted city was the Chittorgarh Fort.

If there is something that characterizes Rajasthan (apart from the turbans and whiskers) are the palaces and forts of its cities. We already saw the ones in Jodhpur, Jaipur, Jaisalmer, Bundi but everyone told us that the one in Chittorgarh is the most beautiful of all!

After breakfast on the roof of the hotel we left. But first we would pass through the city of Chittorgarh to visit its fort, famous for a Mughal siege in the 16th century. On the morning of the last day of the year, with a little more serenity, we leave for Bijaipur, stopping off at Chittorgarh. Basically December 31 is a day like any other for us that we are traveling, with the difference that we will have a dinner in Bollywood style with a great buffet and DJ.

At eight o'clock we board the car. We have two hours ahead, until we reach Chittorgarh. And so we rode to this small town lost in Rajasthan, accompanied by a fog that seemed to be in London (and we thought it would be hot and sunny). Luckily little by little the fog went away and we were able to visit the famous fort that something else did not, but it is great. 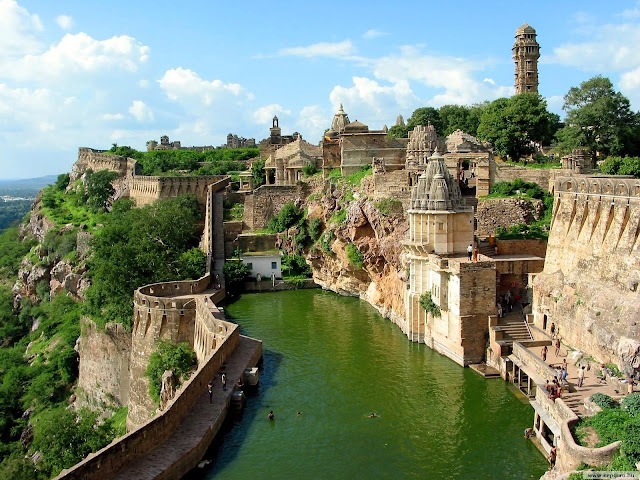 Around 11 in the morning we arrive at Chittorgarh, the biggest fort in all of Rajasthan. As we crossed soils that were the scenes of the crudest battles of Rajasthan, we not only confirmed the earthly thing of what we believed in fantasy. But also that in the perfect dramatism of its architecture lives the epic story of a whole warrior people: the Rajput of Mewar. Chittor ensembles the Rajput pride with their stories and legends.

Many stories of blood and honor are told, which actually happened during the Rajput era. The fort was attacked several times by very powerful armies. The first of the attacks was in 1303 by Alauddin Khilji, who decided to invade Chittor after falling in love with Padmini. In practice, the men, dressed entirely in the color of martyrdom, the saffron, went to meet the enemies to the sure death. The women, on the other hand, followed in the footsteps of their queen. They committed suicide by immolating themselves on huge funeral pyres. The inhabitants of Chittor fort preferred to practice Jauhar rather than surrendering.

The emperors of Chittor never surrendered to the Mughal superiority. This is how in 1535, with Chittorgarh being the leading state of the Rajput, history repeats itself. This time 32,000 men face certain death on the battlefield while their women, led by Rani Karnavati, return to commit Jauhar.

So I saw it on my own right away and after getting a map at the tourist office I set out to get a rickshaw that takes me there. It was to take me inside the fort and bring me back to the station. My rickshaw driver, in the end, invited me to a chai. So after taking chai, he took us to explore every little corner (although the driver tried to pass the odd palace and temple). 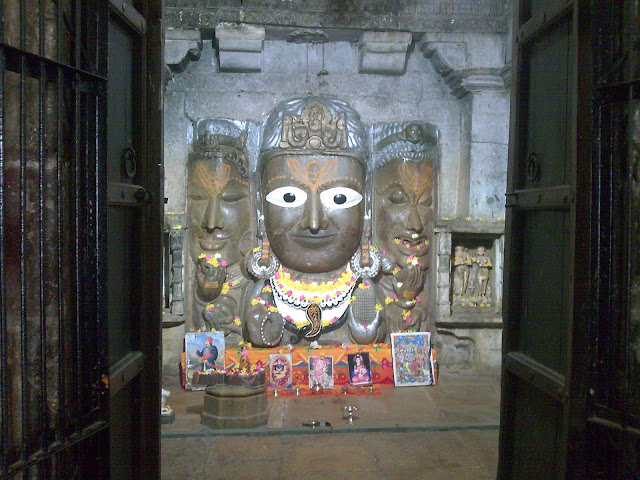 In the middle of a vast and deserted plain, we see how the fort rises from nothing. Here yes that the dimensions count and is that it has a length of almost 6 km and is built on a hill at 180 m in height. It completely occupies the 2.8 square kilometers of the top of this capricious mountain.

Going up the hill that leads to the wall we went through the Ram Pol after crossing another 6 doors and arrived at the Ticket office. Ticket in hand we started the journey by the set that at moments reminded us of Angkor. We just crossed to the other side of Ram Pol, the main one of the 7 doors that cross the wall of Chittorgarh. Through it, we access the fort after climbing a kilometer of winding street. I travel to see the bust of Bappa Rawal and I imagine how invincible he must have felt after winning the conquest.

First we visit a complex of Indo-Aryan style temples that wind around the beautiful tower of victory. This tower consists of 9 floors, 37 meters high. It is entirely decorated with Hindu sculptures and was built around 1440. What we liked most was the tower Jaya Stambha of 37 meters and full of marble carvings and details. The rani padmavati temple is also very beautiful as also the palaces, like of Rana Kumbha.

Although the most photogenic, with the tower, maybe the Gaumukh Reservoir, the water dam that houses a sacred altar with a "waterfall". Continuing beyond the tower and Meera and Kumbha Shyam temples, we arrive at Gaumukh Reservoir. It is a very impressive reservoir where we meet the keepers, always busy with water and washing some bronze bowls. Here I put the second tilaka on the forehead (the red dot) but I will never show you the picture! Here the devotees pray and leave offerings. From there we saw very nice views of the city.

Then we move to visit the Padmini Palace, also known as Jal mahal, overlooking a very characteristic and scenic lake, in the middle of this there is another wing of the building. The views from the windows of this building a little more than crumbling are very beautiful. The rani padmini mahal has a garden with roses and is next to a lake with a turret in the middle. 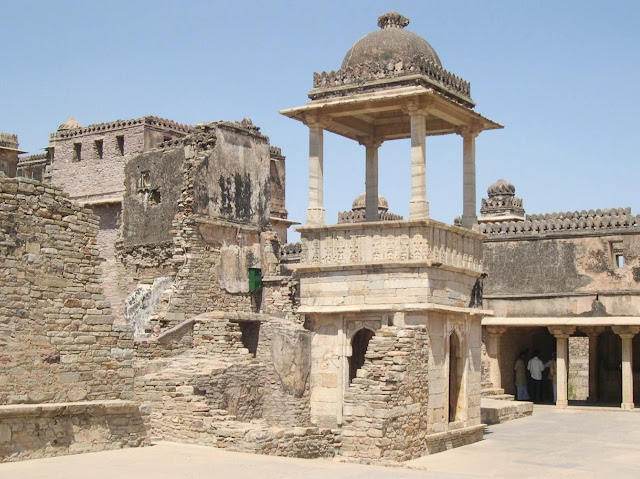 Finally we move to the ruins of the Rana Kumbha Palace, of which only the ruins remain today despite the continuous restoration attempt. The work was going on even when we visited it. Some hand-made stonemasons were rebuilding some fortress spier one by one, maybe in a few decades, they will end. In its interior we can see towers, temples, palaces, monkeys that eat flowers and much more things. Over here we saw a snake and many monkeys inside the ruins, as well as temples, palaces and towers.

We are already heading to the exit. We have been two and a half hours, enjoying a lot of this visit.

We stopped for lunch, at the restaurant , just down from the fort, and in the city, we ate rice, plain naan and matar mushroom. It is time to leave Chittorgarh and head towards Bijaipur. Here we will stay at a castle that rises inside the village, probably one of the most rural and real places I have seen on this trip to Rajasthan. Bijaipur, a crossroads of a few streets, looks like one of those villages in the Italian hinterland. Here people sit at the bar and watch the life that goes around, all but in the Indian reality that is light years away from Italy.

There are people who repair tractors, those who prepare food, and kids fly kites. The castle is very nice. For dinner they organized an outdoor reception, but unfortunately, the rain wanted to ruin everything. A sudden storm forced us to fall back in the restaurant and also flooded our room we had chosen, isolated from the chaos of the party and carved into the bastion.

The dinner was still good, despite the fact that the food had to undergo a chaotic move from the garden to the restaurant. The dinner was initially consumed between music and traditional dances, and then the DJ took over. Fortunately it was the only rainy episode of our entire trip.

For us the evening ends here. We go to bed and despite the deafening music, which fortunately ends not too late, we can sleep. The next day we expect the transfer to Bundi, probably one of the last reality little traveled by mass tourism and on a human scale.