I still remember the first time I arrived in Chandni Chowk. It was a hot day and the reason to get to that part of Delhi was to see the Jama Masjid and the Red Fort. That day was engraved on my eyes of the image those streets of Delhi offered me a real human tide. It was my first trip to Delhi, a place I had dreamed of for years and that every day I thought it was big.

It was hot, and it smelled bad. People watched me whatever I did. The streets were dirty. My dream was becoming a nightmare and from the staircase of the mosque, I made the wrong decision (I would be aware years later of the error) of ignoring that area of Old Delhi and going directly to see the Fort of the city.

Fortunately for me, I was able to return. In this visit to the capital of India, I had aimed as fundamental to travel Chandni Chowk and the streets that surround the main avenue of Old Delhi. Our entry to Delhi was through the new New Delhi International Airport. From the window of the plane, we could see a kind of dust in suspension and that would accompany us throughout our trip.

Delhi airport is now new, clean and modern. It even has seats where people wait lying down to wait for their flights. The backpacks arrive safe and sound. We tried to take money out of the ATMs in the terminal but they do not work. When leaving we do not see any sign with our name but to the second one, we found it. It turns out to be a very serious man who tells us that we have to wait because another couple comes with us.

While we wait we try our luck with the ATMs outside: 3 ATMs of 3 are "Out of order"! When leaving, it is cloudy but we face a sticky heat that is very usual as of today. The serious man drives us on his taxi to the hotel. The car has fringes around the interior and an altar on the dashboard.

We arrived at the hotel, located in an alley in the Chandi Chowk neighborhood. They charge us 800 extra for being early risers and arrive hours before check-in. It's those little spikes that will only strain us the first day. It was best to lie down now and start to get to know this fascinating and mysterious place from next day.

The next day, after a succulent breakfast at the hotel (included in the price as in the vast majority of hotels in India), we headed to the ATM. After two other banks that did not work, we managed to take out our money from one, despite having its doors half closed with a chain.

We go to the Red Fort. In many tourist places in India, the first thing that can draw our attention is that the queues to enter are separated by sex. In the vast majority of the time, the tail of men is much larger than that of women. Also, the great amount of security we see in these monuments is striking. This security is not limited to having a simple security at the door, but to several policemen or soldiers with rifles and protected by sandbags.

Well, with respect to the Red Fort, it is a construction to reflect the Mughal power and that interestingly, it only had one emperor, Aurangzeb. We see the Lahore Gate named after it because it is oriented to that city, now in Pakistan. We decided not to enter as the guides say it is very poorly maintained. At the door, we take some photos while we are harassed by sellers and guides.

We jump across the street, running so as not to be run over, and look for the Digambara Jain temple. The man at the entrance tells us that we cannot leave our shoes on the street and tells us where we should leave them in the alley next to us. We leave our sandals with a nice gentleman and we get back, wetting our feet.

We climbed some stairs, also wet. Here inside we breathe tranquility, some devotees sing, others strike the bell. There is a smell of burning incense. We are the only tourists and we do not want to take out the camera, which has already attracted attention.

As we leave the temple, we wander through the Chandni Chowk market, which literally means "place of moonlight" and owes its name to the fact that, in the time of Shah Jahan, a canal ran through the center and the moon was reflected in the water at night. There we find stalls of all kinds, among them, watch repair centers, wedding invitation card stores, flip-flop repair shops.

We also find a street solely dedicated to books, an area full of saree shops, or the most famous district: Khari Baoli, a market for nuts and spices. We take our first photos of the people. It turns out that they love them, some pose and everything. We continued the walk and each time the streets were narrower, they opened doors of old houses with beautiful facades hidden behind posters with signs and wires of light.

I was not going to be overwhelmed by the people neither by the smells or the heat. I had traveled, matured and I learned a lot in these years. I was more determined than on that first trip. There are Sikhs on their way to Gurudwara Shish Ganj. That was a hotbed of people, but in spite of everything, it seemed like a place even more attractive.

We arrived at the Jama Masjid mosque, the largest in India, with a capacity for 25,000 people. We put the flip-flops in the backpack and the man at the entrance wants to charge us more. He says that we have two cameras. We only take one. We enjoy relaxing on your patio. When we left, we looked for a food stand. We eat some samosas in the street, accompanied by sweet lassi. 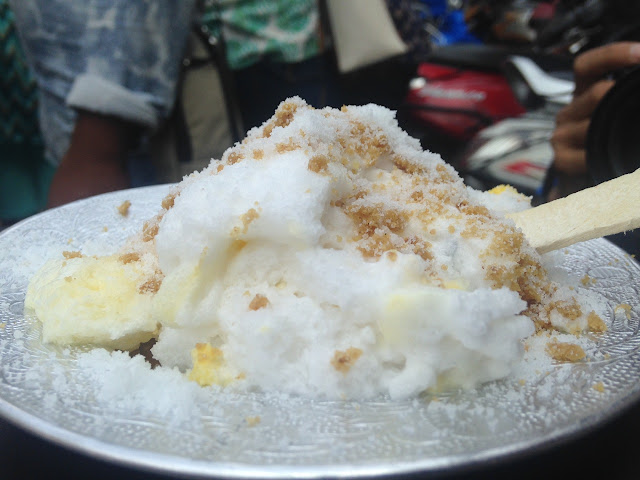 We decided to take the subway to get to Akshardham. After the long day, we return to the hotel, have a shower and then go out for dinner. After finding a decent restaurant, we decided on rice, lamb meat, naan and some round things with tomato. We do not know what they are called, but they sting a bit. We get back to the hotel and fall asleep at 8:30 p.m.